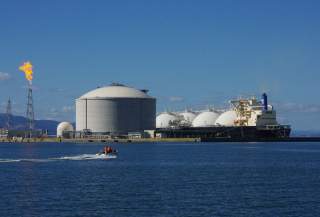 For more than four decades, Alaskans have been knowingly sitting on a virtual gold mine—in this case, a mother lode of natural gas. Estimates of the state’s natural gas reserves top 200 trillion cubic feet in Alaska’s North Slope and on its continental shelf. But for various economic and political reasons, the state has been slow to take advantage of this gift from nature. Recent decisions by the state government and energy companies, however, indicate this inertia may be a thing of the past.

Earlier this month, the Alaska LNG group (a consortium of energy and pipeline companies, and the state’s own gas development corporation) submitted documents to the Federal Energy Regulatory Commission (FERC) to conduct an environmental and safety review for a proposed natural-gas export project. This is a necessary step in getting Washington’s okay for a multibillion-dollar project that will bring natural gas from the North Slope south through an 800-mile pipeline to a new gas-liquefaction facility at Nikiski on the Kenai Peninsula.

For years, the state’s government has lived off the royalties generated by Alaskan oil production. And with the state’s coffers full, Alaskans found themselves paying no sales tax and no state income tax. In recent years, however, oil production has begun to drop and worries have begun to rise about the state’s future fiscal picture.

In theory, with a huge amount of natural-gas reserves at hand, tapping into them to keep the state’s kitty full and taxes nonexistent was the obvious alternative. Yet with state politicians and the major energy companies unable to come to an agreement about what would be an equitable and predictable cut for the state in royalties, a limited internal Alaskan market for gas and, more recently, the revolution in shale-gas production in the lower forty-eight states, Alaskan gas had no obvious market and was left literally in the ground.

But all of this has changed. The state and the energy companies have reached an agreement on profit sharing and the Asian market for natural gas, shipped as liquefied natural gas (LNG), has exploded. Asian allies, such as South Korea, Taiwan and Japan, are spending billions to buy LNG monthly. And other countries, like India, are in the market for new gas supplies as well.

For Japan in particular, ever since the meltdown of the Fukushima nuclear power plant in 2011 and the subsequent shutdown of the country’s other nuclear plants, Japan has been importing massive amounts of high-priced gas from around the globe. Last year alone, it imported nearly 90 million tons of LNG; it is the world’s largest importer. And while Japan hopes to bring its nuclear power plants gradually back online, domestic opposition to doing so still runs very high. Projections have only one-third of the plants resuming operations.

Poor in energy resources, Tokyo has aggressively sought to diversify its gas-supply sources, looking for both lower prices and more secure suppliers. Well over 40 percent of its imports originate in the Middle East, West Africa and Russia; over 60 percent passes through the increasingly volatile South China Sea. Recent memorandums of understanding between the Alaskan state government and Japan have formalized the latter’s long-standing interest in North Slope gas and should help reassure corporate investors about the economic feasibility of export plans.

Even though the North Slope project still requires Department of Energy approval and several years of design work and construction, these recent announcements come at an important moment for Japan. Since returning to office, Prime Minister Shinzo Abe has been eager for a rapprochement with Moscow, with an important element of warming ties to be expanded gas supplies from Russia’s Sakhalin Island. Already, Russia is Japan’s fourth largest supplier of natural gas. However, with the Japanese government’s alignment with the West on sanctions against Russia, ties between Tokyo and Moscow have cooled, with a planned state visit by Putin to Japan for this autumn almost certainly to be shelved.

For both Washington and Tokyo, this should be a reminder of why it is critical to pick one’s energy partners with care. Having American allies overly dependent on potentially unstable or nondemocratic regimes can’t help but make them less dependable in moments of crisis. There is no question, for example, that European reliance on Russian gas supplies has made many of our allies on the continent more reluctant to push back against Putin’s bullying in Ukraine and elsewhere. And, indeed, Japanese dependence on Iranian oil exports was a key, if understandable, reason why Tokyo was slow to join the American-led embargo of Iranian oil in 2011.

Recent events should also prompt more effort on the U.S. government’s part to take fuller and timelier advantage of the newfound abundance in America’s natural-gas reserves by expediting federal approvals for plans to build new liquefaction plants and export arrangements. Not only is it economically beneficial to be an energy exporter, but, as we’ve seen, it’s strategically important as well.

Yet the revolution in natural gas is not confined to the United States alone. It is an increasingly competitive business, with new reserves seemingly being discovered every few months somewhere in the world. With huge upfront investments required to build infrastructure to drill, liquefy and ship, energy companies are not sitting around waiting for either Washington or Juneau to get its act together when they have other gas plays at hand. As the saying goes, “you snooze, you lose.”

It is certainly good news then that Alaska has now moved ahead with its plans for developing its North Slope gas. But, potentially, it’s even better news for both Japan and the United States, as energy ties help bolster a critical strategic relationship.

Michael Mazza is a research fellow at the American Enterprise Institute.

Gary Schmitt is director of the Marilyn Ware Center for Security Studies at the American Enterprise Institute.