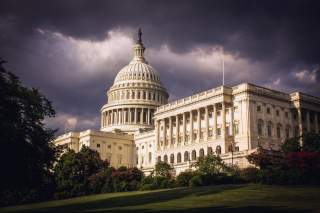 Republican presidents and Congresses claim to support fiscal responsibility and balanced budgets. Yet the previous GOP president, George W. Bush, was a wild spender. The Republican-controlled Congress that served alongside him was no better.

So too it looks to be the case with President Donald Trump and the current GOP-dominated legislative branch. The former doesn’t want to touch entitlements. The latter doesn’t like the big cuts President Trump proposed in discretionary outlays in areas such as the State Department. And most of the Republicans are clamoring to fill the Pentagon’s coffers: the only question is how much, how quickly.

These nominally “conservative” spendthrifts act like they have no choice but to foist money onto the military. They rightly worry about a mismatch between foreign policy and force structure. But America’s expansive international intervention is discretionary, not mandatory. No security imperative requires defending prosperous and populous allies in Asia, Europe and the Middle East, fighting other nations’ battles in Africa and the Middle East, engaging in seemingly endless nation building in Central Asia and the Middle East, and treating the slightest instability anywhere as a summons to act.

Congress and the president must begin to rethink priorities as America’s fiscal situation becomes more precarious. As usual, the Congressional Budget Office produces the grimmest reading in Washington.

In late June, the agency released “An Update to the Budget and Economic Outlook: 2017 to 2027,” revising estimates released only three months before. Alas, the news got worse. On the cover, the CBO announced that “over the next decade, outlays are projected to grow more quickly than revenues, thereby increasing the debt.” Yet “growth in real GDP” will be only “modest over the coming decade.” That is double bad news.

What is the outlook over the coming decade? The CBO reported, “After declining between 2009 and 2015 as a percentage of GDP, the deficit rose significantly in 2016 and is likely to do so again in 2017.” Although the agency expects a dip next year, the deficit “will resume its upward trajectory over the remainder of the projection period. The growing shortfalls would occur mainly because, under current law, growth in revenues would be outpaced by growth in spending for large federal benefit programs (primarily retirement and health care programs targeted to older people) and for interest payments on the federal debt.”

The estimated deficit this year is $693 billion, up $134 billion from the January estimate. And that’s a $109 billion increase over the number in 2016. The projected deficit next year will be “only” $563 billion, rising to $689 billion in 2019. The red ink will bust the trillion dollar mark in 2022 and near $1.5 trillion by 2027—all without a fiscal crisis, which caused the previous, temporary, jump over a trillion dollars. The accumulated deficit over the coming decade is expected to be $10.1 trillion, averaging more than $1 trillion annually.

The annual deficits pose a short-term burden. The debt they create will persist far longer. Although the debt as a percent of GDP will drop next year, it will “rise steadily in subsequent years,” warned the CBO. Debt held by the public—which excludes past intragovernmental “borrowing” of the Social Security “surplus”—already is an excessive 77 percent, and will jump to 97 percent by 2027. That would be the highest since 1947, as America was starting to pay off the cost of simultaneously battling Nazi Germany and Imperial Japan.

Alas, the news gets even worse in future years, which are covered in detail in another CBO report: “Beyond the 10-year period, if current laws remained in place, the pressures that are projected to contribute to rising deficits during the baseline period would accelerate and push debt up even more sharply.” Every bad trend will be reinforced and redoubled.

This all will occur without another recession, another financial crisis or another “cakewalk war” or two—let alone a real conflict with a country with a real military, such as Russia, North Korea or China.

Unfortunately, the increased debt would compound America’s economic problems. According to the CBO:

• “Federal spending on interest payments would increase substantially as a result of increases in interest rates, such as those projected to occur over the next few years.”

• “Because federal borrowing reduces total saving in the economy over time, the nation’s capital stock would ultimately be smaller, and productivity and total wages would be lower.

• “Lawmakers would have less flexibility to use tax and spending policies to respond to unexpected challenges.”

• “The likelihood of a fiscal crisis in the United States would increase. There would be a greater risk that investors would become unwilling to finance the government’s borrowing unless they were compensated with very high interest rates. If that happened, interest rates on federal debt would rise suddenly and sharply.”

At the same time, domestic discretionary outlays will drop from 3.2 percent to 2.6 percent of GDP. That matters for military outlays, since politicians seeking budget cuts tend to focus on the former category. But today, domestic discretionary spending only makes up about 15 percent of total outlays. That share will diminish even as deficits and debt rise. Future cuts will have to come from elsewhere.

The five big spending blocks are Social Security, Medicare, Medicaid, net interest, and military. The first two benefit a growing population of elderly who believe they paid for these benefits and vote in disproportionate numbers. Continuing rapid increases in health care outlays ensure that Medicaid costs will continue to rise; the only question will be how fast. The fourth category is likely to explode as the Federal Reserve backs away from its policy of near-zero interest rates. Which leaves military outlays bearing a large fiscal target.

While Americans will sacrifice if America is threatened, they aren’t likely to look kindly at proposals to cut Social Security and Medicare because the Europeans, with a larger population and economy than America, don’t want to cut their social programs in order to hike military outlays. There isn’t likely to be a groundswell of public support to slash health-care benefits for the poor because the South Koreans don’t want to do more despite possessing an economy forty times as large as that of North Korea.

Demonstrators aren’t likely to march insisting that monuments, museums and parks be closed, education and housing grants be ended, and other domestic programs be ravaged to ensure that Japan doesn’t need to create a military commensurate with its wealth and interest in its own security. And no one is likely to launch a hunger strike on behalf of ever higher taxes to fund new nation-building crusades around the globe.

Of course, this all is only through 2027. The CBO’s report, “The 2017 Long-Term Budget Outlook,” which covers the out years, is perhaps even more depressing. Such estimates are highly problematic, of course, and responsible action today would have a dramatic impact on future forecasts. However, legislators are notoriously reluctant to impose short-term pain—before the next election—to achieve long-term economic gains. Sometimes presidents take a more responsible view, but not, by all accounts, the present occupant of the White House.

Unfortunately, the CBO almost certainly has the general direction of American finances right, even if the exact numbers will differ. It warns, “Deficits rise over the next three decades—from 2.9 percent of GDP in 2017 to 9.8 percent in 2047—because spending growth is projected to outpace growth in revenues. . . . In particular, spending as share of GDP increases for Social Security, the major health care programs (primarily Medicare), and interest on the government’s debt.” Incredibly, the latter alone would run almost as much as Social Security and only a little less than all federal programs other than Social Security and health care.

Increasing deficits obviously mean a bigger debt. With U.S. debt starting at 77 percent of GDP today and laws not changing dramatically, says the CBO, “growing budget deficits would boost that debt sharply over the next 30 years; it would reach 150 percent of GDP in 2047. The prospect of such large and growing debt poses substantial risks for the nation and presents policymakers with significant challenges”—to put it mildly. Indeed, that’s a higher level than what Greece suffered before its dual economic and political collapse, from which it has yet to recover.

In the second report, the agency goes on in depressing detail for about fifty pages, detailing America’s dismal financial future. The possibility of another fiscal crisis would grow even as the ability of the federal government to respond would shrink. The pressure on military outlays would become overwhelming. Budget-driven changes in military spending would force potentially wrenching adjustments in foreign policy. The cost could include service personnel needlessly sacrificed as Washington attempted to maintain commitments for which it no longer possessed the necessary force structure.

The usual Republican suspects continue to make the same unrealistic arguments for military outlays detached from America’s fiscal situation. But reality has an ugly tendency to assert itself at the most inconvenient time. According to the CBO, fiscal reality is coming, and far faster than most Washington policymakers appear to realize.

Better to start preparing for the likely financial tsunami to come. That means adopting a more cautious, realistic and even “humble” foreign policy, as George W. Bush once put it. One that better matches a democratic republic with a limited government dedicated to protecting individual liberty. And one facing greater fiscal challenges than ever before, except perhaps at its birth. A failure to act now might mean a far faster and more destabilizing retrenchment than today’s hawkish foreign-policy establishment could imagine.