Is America Losing Its Credibility with the Middle East? 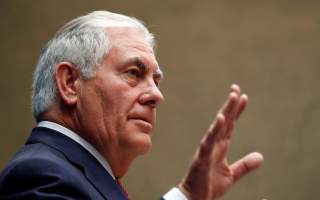 You should cringe whenever you hear that the United States is calling upon some government to do this or that, which happens very often these days. It usually means that the United States has found no way to convince, incentivize or pressure that government to do what needs to be done (from the viewpoint of the United States). Indeed, “calling upon” is often a public affairs cover-up for inaction. Thus, most recently Secretary of State Tillerson called upon the Iranian-backed militias in Iraq to “go home” now that the territorial war against the Islamic State is being won. It was unclear whether Tillerson was telling them to return to Iran or merely to their homes in Iraq. Although the militias are armed, guided and financed by Iran, the foot soldiers are Iraqi Shias. Still, the Iraqi prime minister did not even dignify the call with a courtesy demurral, something along the lines of “this is something to consider.” Instead, he stated flatly that the militias were “Iraqi patriots” and hence presumably to be venerated and maintained rather than disbanded.

This is hardly an isolated incident. The Iraqi government would not exist were it not for the thousands of Americans who gave their lives and half a trillion of U.S. taxpayer dollars invested in making Iraq into a democratic regime over the span of fifteen years. It is a Shia government that again and again spurned U.S. calls to reconcile with the Sunnis, which is a major reason for why the Islamic State flourished in the Sunni parts of Iraq. It is a government that increasingly heeds Tehran much more than Washington. The United States has found no way to stop this loss of influence over Iraq. Indeed, after Iraqi prime minister Haider al-Abadi basically gave Secretary Tillerson the finger, Tillerson had little to say about it apart from making another appeal.

He called the Abadi government and the Kurds “to enter into discussion and dialogue.” The Iraqi government paid no mind to this appeal any more than to the previous one. This is particularly troubling given that the Kurds were by far the most effective anti-Islamic State military force. Plus, they shed a lot of blood to defeat the Islamic State in Iraq and are the most reliable pro-Americans (next to Israel) in the region. Now that the battle is over, the United States is abandoning them. The most it is willing to do at this point is call upon the government of Iraq to make nice with the Kurds.

Secretary Tillerson also made a stop in Afghanistan. While he was there, he called on the Taliban to renounce extremism. But he didn’t propose a strategy that would pressure Pakistan to make its intelligence service stop promoting and supporting the Taliban or stop providing training and supply bases for the Taliban. I hasten to acknowledge that Secretary Tillerson did not ignore Pakistan. However, rather than show that the United States tilt towards India is meant to contain China, and is not antagonistic to Pakistan, he called on it to “take a clear-eyed view of the situation that they’re confronted with in terms of the number of terrorist organizations that find safe haven inside of Pakistan.”

One notes that every time the United States calls on a government or party to do something and its request is ignored, it loses more of its credibility. The United States hence should use all the means available to it—including stopping the flow of billions in aid and arms, applying economic sanctions and restraining the CIA—rather than plead. In short, I am calling on Secretary Tillerson to make fewer calls—and you know how much effect such a call is going to have.

Amitai Etzioni is a professor of international relations at George Washington University. His most recent book, Avoiding War with China, was published this year.

Image: U.S. Secretary of State Rex Tillerson gestures while speaking to staff members at the U.S. Mission to the U.N. in Geneva, Switzerland October 26, 2017. REUTERS/Alex Brandon/Pool​