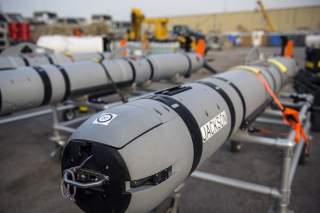 Strategists contemplating Asia-Pacific strategy quickly come to the conclusion that the undersea campaign is decisive. Fixed targets are vulnerable in the age of precision strike, meaning that air bases do not have a chance against a barrage of missiles. And with advances in ISR (Intelligence, surveillance and reconnaissance) sensors and ever expanding missile ranges and power projection platforms, surface warships may not fare much better. Thus, it is no laughing matter to consider rumors that China has pulled off some breakthroughs in submarine quieting or that the PLA Navy submarine force has ambitions to enter both the Arctic and also the Atlantic as part of a much enhanced pattern of operational deployments.

But undersea warfare is not static and some have speculated that higher computer processing speeds combined with myriad new underwater sensors could render even remote parts of the ocean more and more transparent, undermining submarine stealth and survivability. Some of China’s recent achievements in these developments have been noted in this space. Another question hovering over the undersea warfare planner is the question of how important undersea robots, both unmanned undersea vehicles (UUVs) and remotely operated vehicles (ROVs) could be. Will they come to assume the same vital role that unmanned aerial vehicles (UAVs) have assumed? A Dragon Eye column has dipped a toe into this discussion before by examining the role that the new U.S. Navy anti-submarine unmanned surface ship (USV) Sea Hunter (with an extraordinary range of 10,000 miles) could play in the evolving U.S.-China maritime rivalry. This column will dip another toe into this pond and explore several Chinese platforms in development of this nascent unmanned contest unfolding on and under the waves.

A first Chinese UUV of significance is the so-called Haiyi [海翼] or “sea wing,” which is a standard looking glider. It should be said that this is hardly Beijing’s only glider program. Gliders in the UUV context refer to vehicles originally developed in the West that are literally self-propelled in that they lack a large battery or fuel for propulsion. Instead they rely on small changes in buoyancy to maintain propulsion through a constant process of ascending and descending through the water column. According to a description of Haiyi recently published in the Chinese military magazine Ordnance Industry Science and Technology (兵工科技), “since there is no power propulsion, the acoustic signature is extremely low. That characteristic suggests that [this platform] can have great significance for the military domain [由于无动力推进噪音极底这个重要的特点使得其在军事上也有很大的应用价值]. Produced by a Shenyang robotics laboratory, Haiyi is two meters in length and weighs 65kg, dimensions quite in line with Western analogues. The project was initiated in 2003 and a prototype was ready in 2005. An extended test in 2012 explored the area proximate to the Dongsha [东沙] islands in the northeastern South China Sea. A map included with the article actually shows the vehicle’s precise track, exploring the sensitive waters west of the critical Luzon Strait. The article further notes that, due to Western sanctions on glider technology, the Haiyi was “completely developed indigenously.” It is apparently of some significance that a subsequent report boasts that this glider has set world diving records and reached a depth of 6,229m. This is significant because sound propagation is more efficient in deeper waters, so deep-diving gliders could possibly be related to submarine detection missions.

On the subject of Chinese glider development, one might also highlight the rather more mysterious “dolphin-shaped underwater glider,” [仿海豚水下滑翔机] a picture and short description of which appeared in the December 2016 issue of the Chinese defense magazine Contemporary Military Affairs [现代军事]. Fitted with both fin and tail, it is not clear whether the design from the Beijing company Weisheng [维盛] represents an application of biotic (animal-like) technologies, a subject of high interest among Chinese defense researchers, or is simply intended to befuddle would-be drone snatchers. More on that point at the conclusion of this essay, but the short description does suggest that this “dolphin” glider has the advantage of low acoustic signature and, among other missions, could be deployed for the mission of providing “sonar countermeasures.” [水声对抗].

Two other undersea robots are profiled in detail in the first Ordnance Industry piece discussed above. They are designated Qianlong [潜龙] 1 and 2. Unlike the gliders, these are both autonomous underwater vehicles (AUVs) but their shapes and presumably their intended purposes are starkly different. Qianlong-1, which had its first ocean test in May 2013, resembles a torpedo and is reported to be 4.6m in length with a weight of 1,500kg. It can maintain two knots over twenty-four hours. From the enclosed photo, this platform would appear to have side scan sonar capability. No information is provided regarding its likely missions, but it was reportedly China’s first 6,000m undersea robot, and it is said to be capable of avoiding obstacles in “relatively complex ocean bottom environments.” Its cousin, Qianlong-2 looks completely different, distinctly resembling a massive tuna rather than a torpedo. Completed in March 2016, Qianlong-2 is reported to have been involved in no less than forty separate ocean test missions, including one apparently as far away as the southwest Indian Ocean. The 1.5 ton fish-looking AUV seems to have been primarily developed for ocean bottom and resource exploration and extraction missions.

However, the next vehicle profiled here is plainly designed for military purposes. Revealed in yet another issue of Ordnance Industry is an “Indigenous New Type Anti-submarine, Anti-Frog Man Unmanned Boat” [国产新型反潜反蛙人无人船]. These particular USV boats come in two variants, 4m and also a larger 8m version. The boats are said to have a top speed of forty-five knots and to be capable of ranges up to 1,500km in sea conditions up to sea state 5 or even 6. The project was initiated in 2014 and the prototypes are built of polycarbonate plastic, fiberglass and kevlar. The boat is a semi-submersible and may operate mostly submerged with only a mast protruding that has various sensors. For detection of submarines, the boat has side-scan sonars that are capable of seeing targets “at relatively long distances” [距离比较远]. A spherical array is said to be optimized against frogmen. The platform does not have any weaponry and is intended only as an ISR platform intended to relay a warning to the command headquarters. The effort may be part of a larger “net-centric” doctrine that relies, to a large extent, on using longer range missiles to put torpedoes onto relatively distant undersea targets. On the other hand, the designer also does point to a whole variety of non-military missions, including scientific research and aiding the fishing industry as well. According to this article, the Shenzhen designer already has five prototypes built and is looking to secure a formal contract for sale, potentially first to the Chinese Coast Guard [我国海警].

Many USV research and development programs obviously exist in China today. For example, the same article that profiled the dolphin glider above also discusses two USVs, one produced in Dalian called S18B and another from Shanghai. The latter has developed a series called Jinghai [精海] and this has been used as far away as in the Antarctic, as well as in the East and South China Seas. Indeed, Jinghai-1 is reported to be in service with the PLA Navy South Sea Fleet and is apparently tasked with mapping. There is yet another USV that closely resembles the rather unique design of a Northrop Grumman ACTUV for a semi-submersible USV. This Chinese model, designated as BQ-10 and produced in Shenyang, is said to be well adapted to military applications, because of its stealth. With its length of 6.1m and its mast height of 5m, the platform is said to be capable of tracking both surface and underwater targets.

The multiple programs discussed above offer some perspective into the highly dynamic development program that China has put in place to apply robotics toward building its “great wall at sea,” both on and particularly underwater. In the years ahead, it seems likely that Chinese and U.S. drones will be facing off and interacting in a high stakes cat and mouse game. A glimpse of this “game” was revealed, of course, back in December 2016 when China snatched a U.S. underwater glider in the South China Sea. One Chinese-language review of that crisis that appeared in Global Times [环球时报] notes that “Pentagon sources said the UUVs would be used to create databases . . . which would be used to track China’s growing submarine force.” There was additional speculation in the Chinese article whether the snatch had been a bit of retribution for President Donald Trump’s early phone call with the leader of Taiwan. A Chinese military source quoted in this report published after the drone was returned by China did not comment on that sensitive issue, but did observe that “bilateral crisis management mechanisms were relatively effective.” We can only hope that future iterations of the “Drone Wars” between the superpowers will likewise feature such restraint—with many humans in the loop, lest a robot inadvertently sets in motion a catastrophic war.