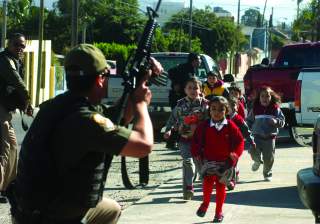 Secretary of State Tillerson and Homeland Security Secretary Kelly meet their Mexican counterparts on May 18 to discuss the fight against organized crime and drug smuggling. This is a positive sign in a relationship that has been shaken by U.S. criticisms this year. Both countries need good—and better—cooperation against drugs and cartels. The United States is suffering an epidemic of opioid overdoses fueled by the abuse of prescription drugs and heroin and synthetic opioids smuggled from Mexico. Mexico is suffering a surge in homicides fueled in part by the criminal gangs that feed U.S. drug demand and reap billions of dollars in profits.

Mexico and the United States have improved cooperation. However, that progress has not been sufficient to stem the smuggling of deadly drugs or the drug-related violence in Mexico. More progress will require higher levels of trust, commitment and investment by the two governments, and creative thinking to find better ways to address illegal drug use and flows.

Launching a reinvigorated effort against international criminal groups will also depend on the state of U.S.-Mexico relations and, specifically, if the governments find a way to work for mutually acceptable outcomes on two other important topics: trade (NAFTA) and migration. It is hard to imagine that the two governments can forge the confidence needed to reach a new level of collaboration against criminal networks without bilateral relations moving beyond the recent high-profile tensions. Mexican domestic politics, for one, won’t allow it.

U.S.-Mexican cooperation in fighting criminal groups and drug smuggling has improved markedly since the creation of the Merida Initiative in 2008. This bilateral program aims to disrupt the operational capacity of organized crime, to support rule of law improvements, to create a twenty-first century border—and to help Mexican communities wracked by criminal violence. The United States has appropriated some $2.6 billion for Merida Initiative programs, while Mexico has spent over ten times that amount in efforts to improve law enforcement and justice performance.

Many drug kingpins have been killed or captured. Mexican law enforcement, military and intelligence capacities have improved. U.S.-Mexico law enforcement, justice, intelligence and related cooperation is arguably the best it has ever been. Still, drug cartels have split into smaller—and often more violent—groups, which continue to supply the U.S. drug market, increasingly with heroin and synthetic opioids. Criminal groups have also turned to other activities from extortion to fuel theft, further damaging Mexican communities.

Secretary of State Rex Tillerson raised hopes for renewed U.S.-Mexico engagement, announcing that senior Mexican officials would come to Washington, DC May 18 to participate in “an interagency process to see if we can get at transnational organized crime and begin to break these organized crime units up.” Tillerson argued that the drug smuggling organizations are a threat to both countries and that dealing with the problem is “vital.” Homeland Security Secretary John Kelly has also made fighting Transnational Criminal Organizations involved in drug smuggling a priority, linking it to the 52,404 deaths in the United States caused by drug overdoses in 2015: the highest number of drug-related deaths that the United States has ever seen. Particularly important is the sharp rise in deaths linked to opioid overdoses from the abuse of prescription opioids, heroin and illegal synthetic opioids, such as fentanyl. Those overdoses have quadrupled since 1999. Recent testimony and reports by the FBI, the Drug Enforcement Agency and the State Department detail the surge in U.S. demand and in illegal drug production and flows from Mexico.

From the Mexican side, the needs are also grave. Despite funds invested in improving and reforming federal and state law enforcement and justice systems, drug production has grown and homicides in Mexico again rose in 2015–16, reaching almost 23,000 in 2016. Reports from the first three months of 2017 suggest that homicides in Mexico could reach a new high this year. While the Mexican government points out that media reporting has unfairly compared Mexico to international war zones, increased criminal violence is a very serious problem which the police and military have not yet been able to staunch.

Smuggling drugs to the United States remains very profitable, with income estimated between $19 and $29 billion a year. Mexican officials readily add that the money buys many U.S. weapons for criminals to use in Mexico and fuels much corruption.

On the United States’ side of the border, the challenges are also immense. Somehow the drugs get from U.S. border crossings—where most of the heroin and other opioids are thought to enter—to communities across the country despite federal, state and local law enforcement efforts. U.S. demand-reduction and anti-addiction programs have not yet turned the tide. Neither have the United States or others been able to track down the vast illicit profits that are believed to flow from this deadly trade.

This week’s U.S.-Mexico meeting can begin to explore how the two governments can more effectively work together. The effort must eventually involve a range of agencies and departments to attack effectively the entire illicit drug chain from production (which can be poor, remote communities growing opium poppies or via a shipment of chemicals arriving clandestinely from China), to distribution chains, to local marketing, and to systems handling the finances for the criminal groups. Key will be the ability not just to arrest and convict bad guys, but to track and seize assets, to move against those who facilitate financial flows, and to break up gang networks so that they will not just re-form with new leaders. And, on the U.S. side, more effective drug demand reduction and anti-addiction programs are essential.

When Secretaries Tillerson and Kelly sit down with their Mexican counterparts in Washington, it can be a new beginning in a long and complicated effort against dangerous and ingenious opponents. Good will and creativity will be vital to build the confidence and commitment needed for success. Despite the challenges, this is a great opportunity for two neighbors to underscore the importance of better collaboration and to move toward better results.

Earl Anthony Wayne served as U.S. ambassador to Mexico from 2011—15. Wayne is a Public Policy Fellow at the Woodrow Wilson International Center for Scholars.