America Must Act on the North and South Poles 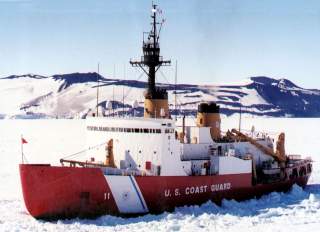 The two poles of our planet—the Arctic and Antarctica—demand greater attention right now. For decades, the United States has played a leadership role in both regions, a responsibility that it must continue to fulfill as a warming climate and other drivers of change are creating new challenges and opportunities. Regrettably, the Trump Administration has not devoted the resources or high-level attention necessary to maintaining American leadership position on these critical matters.

During the height of the Cold War, visionary U.S. diplomacy under President Eisenhower led to the creation of the Antarctic Treaty in 1959, a treaty that has successfully reserved that continent for scientific research and other peaceful endeavors by banning all military facilities and activities there. More recently, the United States completed a successful term as chair of the Arctic Council, a consensus-based body whose participants include the eight Arctic states, representatives of Arctic indigenous peoples and almost forty observer states and organizations.

The Arctic Council has done valuable work in promoting environmental research and developing pathways to sustainable, responsible economic growth in the Arctic. Under U.S. leadership, the Council has also served as the forum for negotiating three binding agreements dealing with search and rescue, oil pollution and scientific cooperation. America has also led in producing a visionary agreement to prevent unregulated fishing in the Arctic Ocean, pushed the International Maritime Organization to strengthen rules for safe polar shipping, and spearheaded the creation of the world’s largest marine protected area in the Ross Sea off of Antarctica.

This brand of proactive, far-sighted U.S. leadership seems to be faltering at a moment when developments in both areas require it urgently. The alarming impacts of a warming climate at both poles—and the consequences of such warming on the rest of the world—are not “fake news.” Rapidly rising temperatures in the North are melting sea ice at record rates. Even more worrisome are two positive feedback loops. First, less ice covering the sea and land leads to less reflectivity of the sun’s rays, which in turn leads to more warming and increased melting. Second, the thawing permafrost releases more greenhouse gases, also leading to greater warming.

Just over a year ago, at a meeting chaired by former Secretary of State Tillerson, foreign ministers from the Arctic States signed a declaration acknowledging that the Arctic is warming at more than twice the rate of the global average and that “the pace and scale of continuing Arctic warming will depend on future emissions of greenhouse gases.” Three weeks later, the United States announced its intention to withdraw from the Paris Agreement on climate change.

Already, rising seas and coastal erosion threaten coastal towns in Alaska and in other parts of the Arctic and will force costly relocations. The scientific community has produced compelling evidence of the effects of polar warming on the rest of the planet, including increasing storm surges, sea level rises and wildfires. If more flashing red lights were needed, this summer’s severe climatic events and loss of life and property, exacerbated by the warming poles, should be the wakeup call.

Climate change has also made both polar areas, particularly the Arctic, more accessible. We are witnessing unprecedented levels of human activity in the Arctic Ocean, including commercial shipping and tourism. Significant percentages of the world’s untapped oil and gas resources lie north of the Arctic Circle. Russia has taken concrete actions to capitalize on these circumstances, particularly by building infrastructure along the “Northern Sea Route” and promoting hydrocarbon development. Earlier this year, China issued its first Arctic strategy paper, making clear its intentions to play a major part in the future of the Arctic region.

The United States has not taken commensurate steps to improve infrastructure in its portion of the Arctic. Only after much prodding is Congress considering whether to allocate funds to build at least one additional, badly needed heavy icebreaker, which—when it would launch sometime in the mid-2020s—would bring the total number of heavy U.S. icebreakers to two. Meanwhile, Russia has forty-four operational icebreakers, with fifteen more planned or under construction. The United States cannot be a polar power without critical assets to support mobility and research in these regions.

Additionally, many of the key political-level positions in the Administration responsible for polar policy remain unfilled, including the relevant State Department Under Secretary and Assistant Secretary and the National Oceanic and Atmospheric Administration Administrator. Although President Trump recently announced that he will nominate Kelvin Droegemeier to serve as his Advisor on Science and Technology Policy, the White House Arctic Executive Steering Committee has been dormant since the end of the Obama Administration.

Despite an uptick in reporting on these topics, most Americans remain largely unaware of the importance of the Arctic and Antarctica to their lives. How can the United States proceed?

There are no easy fixes with America politically polarized, climate science challenged and the political will lacking to take prudent measures. But there are steps which can and should be taken.

Congress, after the mid-term elections, should hold hearings to consider how America can maintain its leadership in both polar regions, raise awareness of the importance of both to U.S. interests, and examine the effects of climate change in both regions on Americans and the rest of the world.

The Administration should fill the critical leadership positions in the State Department and in other agencies so the United States can engage at appropriate levels with its partners who are planning polar policy.

Congress and the Administration should work together to increase U.S. capacity to conduct scientific research in both polar regions.

Also, despite serious tensions with Russia on other matters, America must maintain a constructive dialogue and practical cooperation with Russia in the Arctic.

In short, regardless of current political divisions, Americans must find common ground here at home to address the profound challenges and opportunities that lie at the two ends of our planet.

David Balton is a Senior Fellow at the Woodrow Wilson Center’s Polar Initiative.

Ross Virginia is the Myers Family Professor of Environmental Science and Director of the Institute of Arctic Studies at Dartmouth College.

Kenneth Yalowitz is a Global Fellow at the Woodrow Wilson Center, former U.S. Ambassador to Belarus and Georgia and an Adjunct Professor at Georgetown University.