America Must Be Ready to Nuke First 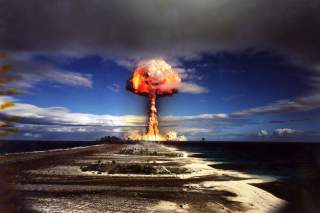 As NATO did in drafting and reaffirming its current nuclear-deterrence posture, any proposed changes to that posture needs to be measured by how it bolsters or enhances—not diminishes—our deterrence posture. The Obama administration will carry a heavy burden convincing the public how embracing NFU will enhance U.S. and allied security and strategic stability, and deter war. Indeed, one struggles to show how it would even benefit our nonproliferation policies when more and more countries and nonstate actors have or pursue other weapons of mass destruction, ignoring any so-called “red lines” to punish acquisition or use. With a no-first-use promise, the other promise of “unacceptable costs” of aggression disappears since our adversary need no longer fear nuclear annihilation.

No one should disagree that deterrence centered on nuclear weapons has played a key role in preventing another major world war. Certainly recognizing the success of deterrence is not to accept it as the last word in ensuring freedom from war. In our multipolar world, we are besieged by terrorism, aggression and growing extremism. We must continue to unremittingly seek better ways of ordering the world. But the search will likely be a long one and no safer or effective system than deterrence is in view. Impatience in seeking a nuclear-free world is a catastrophic guide in that search.

To tear down—or at least drastically modify—the present structure by embracing no first use before a better policy is firmly within our grasp would be an immensely dangerous and irresponsible act. One can only hope that our security and long-standing commitments to our allies ultimately prevail, ending this administration’s legacy of lunacy.