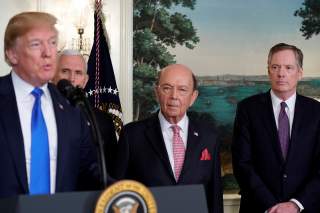 Most would agree with the general proposition that the United States-China relationship, at this particular juncture of history, is the world’s most important bilateral relationship. That relationship is vital for maintaining some semblance of global order and for preventing the widespread proliferation of nuclear weapons. It is also vital to continuing global economic growth while staving off the real prospect of environmental devastation. Yet, after a promising start at Mar-a-Lago, U.S.-China relations have gone badly off the rails and now are teetering above the abyss. Even as the real prospect of bloodshed in either the Taiwan Strait or the South China Sea continues to emerge, a trade war [贸易战] that threatens to split apart the world's two largest economies has all but commenced and could well have tragic consequences. Most palpably for the current administration, this trade war with China will almost certainly mean the failure of the North Korea deal that was recently brokered in Singapore.

That must be the case because everyone knows that China is the key lynchpin of that agreement. If anyone needed reminding of Beijing’s influence on the Korean Peninsula, Kim Jong-un made his third trip to China last week. The “maximum pressure” strategy previously cornered the North Korean leader, but that strategy could only be effective if Beijing stuck with stringent sanctions, which already appear to be softening. Beyond that, as I have pointed out previously in this forum, China likely provides the only feasible route to true denuclearization.

That could be achieved in five reasonably simple steps. First, Chinese arms control specialists make an accounting of the North Korean nuclear arsenal. Second, China's fine logistics network (roads and rails) are used to move the weapons out of North Korea and over the Yalu in an efficient manner. Third, China can warehouse North Korea's arsenal in Northeast China in a way that safeguards the weapons and yet also allows for nominal North Korean custody within a “dual key” system. Fourth, China confirms the Mutual Aid and Cooperation Friendship Treaty of 1961 and thus reaffirms its commitment to protect North Korea from external aggression. Fifth, China sends some number of frigates, fighter aircraft, tanks and other “toys” to North Korea to salve the pride of the North Korean military in the wake of denuclearization. Regrettably, however, what seemed possible only some weeks ago is likely now going up in smoke thanks to acute trade tensions in U.S.-China relations.

Through all of 2017, Chinese leaders seem to have been deliberating over whether the Trump Administration constitutes a first-order threat to Beijing. With the Taiwan and trade issues now coming to the fore of Trump administration policies, the answer is now becoming quite clear, from China’s point of view. In a zero-sum world, Beijing’s strategic choices are relatively straightforward, and they are now hardly disposed to do Washington any favors regarding the Korea negotiations. Indeed, China will almost certainly strike back, not least because Xi Jinping cannot afford to appear weak in confronting U.S. pressure. And unfortunately for the United States, China's position in the trade dispute turns out to be much stronger than many in Washington have long supposed.

Chinese strategists seem to have been mulling the U.S.-China trade predicament for decades. Indeed, the “Belt and Road Initiative” was never intended as a geostrategic maneuver as some have speculated, but instead was always a hedge, lest the United States and its allies seek to corner and isolate the Middle Kingdom. Why does China need millions of American shoppers, if instead, it can entice billions of consumers across Eurasia, the Middle East, and Africa? That is precisely what Beijing has been working on, and it has had more than a few successes already—though it is far too early to render any definitive judgment.

At the same time, moreover, Chinese leaders have been working assiduously to “rebalance” the Chinese economy toward services and away from polluting heavy manufacturing. This seems to be working slowly, as exports now make up less than 20 percent of Chinese GDP, compared with some 36 percent a decade ago. These broader trends suggest that Beijing will not cave quickly to American demands on trade. China's economy could even arguably benefit from a trade war as it would only accelerate the trends toward services, diversification of supply and demand, as well as reliance on domestic consumption. It must also be said that as an authoritarian polity with large cash reserves and a reputation for moving money around efficiently to needy sectors, Beijing is reasonably well placed to weather a near-term financial crisis.

In this lose-lose scenario, Americans will also feel pain—and not just in their prized stock portfolios. As is well-known, U.S. farmers are already reeling from instability in commodity markets set off by the threats and counter-threats over the last few months. These same farmers had experienced good times over the last decade as China’s demand growth proved exponential. Now, farmers all over the world—and outside the United States—will be working overtime to eat up Americans' previous market share. This especially includes farmers in Latin America and the former Soviet Union. Also, numerous leading American companies, from Apple to Starbucks, to Boeing to Caterpillar, will be injured by damaged bilateral trade ties, while their competitors—e.g., Europe’s Airbus—will enjoy privileged access.

But perhaps Washington is also in a strong position, as suggested in an analysis by the New York Times recently. And maybe the unfortunate byproduct of China’s rapid growth over the last decades has been a hollowing out of U.S. manufacturing. Therefore, some reform to the complicated economic relationship was bound to occur, sooner or later. Could it be that the stock indexes have already priced in the painful readjustment as the two economies are wrenched apart? There is not much hope that this trade war will lead to any positive conclusion, for either country.

Bear in mind, of course, that the architects of this perilous approach have no experience in fighting a successful trade war. Thus, we are witnessing a grand experiment. On that point, the American “asks” appear to be startlingly far-fetched: that Beijing ceases its support for leading industrial sectors (such as the Made in China 2025 plan) and that it halts its long-time practice of insisting that foreign companies share technology and adopt Chinese partners. Reputable Chinese financial analysts are thus predicting that Beijing will not accept Washington’s requirements. This may be due, in part, to the fact that “U.S. demands seem to keep evolving [美方要求可能变化无常].”

Even in the unlikely circumstances that Chinese leaders were to cave on these points, what are the chances that they would be implemented satisfactorily and sustainably? Regarding the demand that China must stop asking for access to new technologies, U.S. media pundits seem to forget that American companies have had a choice about whether to do business in China and these corporate leaders are neither stupid, nor irresponsible, nor unpatriotic people. To the contrary, they have most likely concluded that technological seepage is either not particularly significant, or that this seepage is inevitable. In either case, U.S. companies have elected to go along, and these calculations were most likely rational, following a simple cost-benefit calculation that is unlikely to change in its fundamentals because of a trade war. For all the allegations of stolen technological secrets, moreover, there appear to be few concrete examples. That is certainly true in the national-security realm, where speculation has run rampant for decades in the absence of much real evidence, and more than a few episodes of absolute hokum. Moreover, the American media seems utterly oblivious to the historical fact that the U.S. economic rise in the nineteenth century was also to some extent built on stolen technology and rampant corruption.

If America wished to try to stifle China’s rise and guard its manufacturing base against competition by low-paid Chinese laborers, it is most likely a few decades too late. The measures that could have worked in the 1990s are unlikely to be effective since China already has a first-rate industrial and military research apparatus with corresponding world-wide markets and partners to boot. America should not make an enemy out of the Middle Kingdom by seeking to blame China for all (or most) of America’s many real problems. Instead, a much more fair and efficient way to go about reforming the U.S. economy would be to substantially reduce the value of the U.S. dollar, curbing imports and simultaneously boosting export industries across the board. Such a move would be in keeping with conservatives' preferences for the market and against “picking winners.” That step would also be quite consistent with the new realities of a multipolar world in which the U.S. dollar is one of many important currencies, rather than the world's single hegemonic unit of measure. The vastly overvalued, almighty dollar has been great for the financial services “industry,” but formed a significant hindrance for the American worker and the American farmer for decades. True, other countries will complain aplenty, but that is where we should play hardball, arguing that the U.S. market has long been a candy store for all comers (including the Chinese), but those days are over now for good.