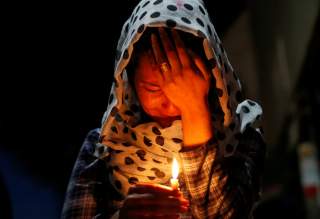 Kabul is mourning after a spate of deadly attacks over the past few weeks, including a truck bomb that killed nearly 150 people in the capital’s diplomatic district. These security setbacks have plunged Kabul into a crisis. The Pakistan-based Haqqani Network was behind the gruesome truck bomb that carried 1,500 kilograms of explosives, according to the Afghanistan’s CIA-backed intelligence agency. The Haqqani Network has been active for over thirty years and has conducted similar signature strikes in Afghanistan in the past to inflict fear. Due to the many civilian casualties the Kabul attack caused, the network has denied involvement to ensure the group maintains its grassroots support.

The group’s leader, Jalaluddin Haqqani, was one of the jihadi leaders who settled in Miramshah, a town in Pakistan’s North Waziristan, in the 1970s before the Soviet invaded Afghanistan. Besides its base in Miramshah, the Haqqanis maintained a strong presence in eastern Afghanistan. At the time, the senior Haqqani sought to overthrow former Afghan president Daoud Khan’s regime. Khan was a nationalist who resisted regional meddling in Afghan affairs.

The Haqqanis’ desire attracted the attention of Pakistan’s powerful intelligence agency, the Inter-Services Intelligence, also known as the ISI, and has since remained a loyal ISI proxy. Jalaluddin soon became one of the key resistance leaders after the Soviets entered Afghanistan. Aiding his effort were the United States and Saudi Arabia, who sent money and weapons through the ISI. (The United States went so far as to reportedly host Jalaluddin at the White House to meet with President Ronald Reagan.)

Since the 1990s, however, the group has closely aligned itself with both Al Qaeda and the Taliban. Jalaluddin allowed Al Qaeda to establish its first camps in Afghanistan in Haqqani territory and became a close friend of Osama bin Laden. After the 9/11 attacks, the group switched sides and turned its battle skills on the current U.S.-backed Afghan government and NATO forces to cater to Pakistan’s agenda in Afghanistan.

Although the Haqqanis operate semi‐autonomously within the wider Taliban movement, the group’s evolving role in leading the Afghan insurgency from behind the scene has pointedly altered the dynamics of the insurgency.

The Haqqani network is a relatively small, clan and family-based organization that operates under a centralized decisionmaking body, though it is decentralized in its execution. The group has leveraged its clan-based alliances to consolidate its power by serving as a key mediator for business and tribal disputes, marginalizing or defeating its rivals, and assuming a subordinate role in its relations with other militant groups, including the Taliban. This approach has enabled the group to not only preserve its operational and financial autonomy but also to benefit from the resources of other groups, including weapons and manpower. At present, Siraj Haqqani, one of the Haqqani sons, also serves as the deputy head of the Taliban movement.

More importantly, the Haqqani leaders have concomitantly pursued power and wealth through both their perverse ideology and ruthlessness. Their profit-driven motivation has increasingly transformed the group into a mafia-like criminal enterprise, which relies deeply on its complex fundraising network and the unfettered operating space provided by Pakistan.

During the Taliban regime, the senior Haqqani used his authority as the Taliban’s border and tribal affairs minister to solidify his control over the border region. As a result, the group managed to carve out a lucrative business enterprise through a diverse set of financial activities, including extortion, kidnapping for ransom, drug trafficking, protection rackets for illicit smuggling rings, foreign donations and money laundering schemes via front companies.

Since then, the group has regularly collected taxes from landowners, trucking businesses, and construction companies, and its leaders reportedly maintain ownership stakes in a diverse number of companies. In order for any business to operate in the group’s territory, it must benefit the Haqqani leaders.

The diversity of the Haqqani Network’s business operations and their loyal client-patron relationship with the ISI make the group distinct from the mainstream Taliban. The Haqqanis represent the “good” Taliban in Pakistan—so much so that Adm. Mike Mullen, former chairman of the Joint Chiefs of Staff, told the Senate Armed Services Committee in September 2011 that the group functions as a “veritable arm of Pakistan's intelligence.”

Today, the Haqqani leaders own properties in Pakistani cities, enjoy safe houses, and are treated in local hospitals. The group runs several madrassas, or schools, inside Pakistan and openly collect donations in mosques and disseminate publicity materials. The Haqqani leaders travel freely to-and-from Pakistan to fundraise in the Persian Gulf, and the group’s arms and supplies regularly pass unimpeded through Afghanistan border checkpoints. The Miram Shah Shura, or the Haqqani leadership council, reportedly includes ISI officers who advise the group on planning operations. The weapons acquisition and delivery to the group also reportedly takes place under ISI’s watch, and ISI officers are even said to participate in the group’s social events. The Haqqanis have not conducted a single attack against Pakistan since the group’s emergence in the 1970s.

In the past decade, the United States has engaged the Haqqanis through repeated drone strikes and designated the group as a foreign-terrorist organization in 2012. Washington, DC has also placed a $10 million bounty on Sirajuddin Haqqani and has repeatedly asked Pakistan to go after Haqqani sanctuaries. However, despite warnings by the United States, Pakistan remains unwilling to take any action against the group. This—coupled with Taliban’s recent territorial gains in Afghanistan—has animated the Afghan insurgency that has killed nearly 3,500 Afghan civilians in 2016 alone. These measures have done little to change Pakistan’s behavior to abandon its lethal support to the group and has prompted questions from American policymakers about whether that behavior constitutes state sponsor of terrorism.

In the end, without proven support from Pakistan’s intelligence, the Haqqanis are unlikely to survive, mostly because they cannot sustain the increasing number of losses inflicted by the U.S. drone strikes. Unfortunately, Pakistan’s principal role in backing the group’s activities has effectively made previous U.S. efforts futile. As the Trump administration concludes its Afghanistan strategy review, it should also seriously ponder using its leverage points—such as targeted financial sanctions and travel restrictions on intelligence officials with ties to terrorist groups—to create new pressure points that raise the cost and pain level for Pakistan.

Washington should also target the financial networks and banks that are being used as a laundering scheme by the ISI to sustain its support for terrorist groups, place stricter conditions on both future U.S. military aid and military sales to Pakistan, and boost its current drone campaign against the Haqqani Network. Until that happens, the situation in Afghanistan is likely to get worse.

Javid Ahmad is a nonresident fellow at the Atlantic Council and at West Point’s Modern War Institute. The views expressed in this article are his own. Follow him on Twitter @ahmadjavid.

Image: A woman cries as she holds a lit candle for the victims of Wednesday's blast in Kabul, Afghanistan June 1, 2017. REUTERS/Mohammad Ismail​