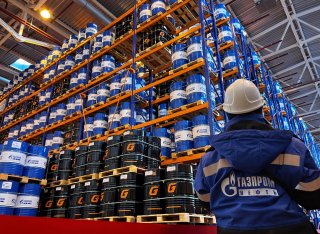 Energy is Russia’s chief weapon in the war against Ukraine. Why? Because oil, gas, and coal energy resources are paying the bills for Russia’s personnel as well as the missiles, artillery, tanks, ammunition, and drones that are raining down destruction on Ukraine. And, painfully, it is Europe that is footing the bill, financing a longer-term war against itself.

Despite Europe’s success in reducing its energy imports from Russia, global scarcity, U.S. energy stagnation, and OPEC+ production limits have resulted in sharply higher prices. Indeed, Russia’s energy earnings from European countries remain about the same as before the war. Europe has been paying nearly a billion dollars a day to Vladimir Putin’s regime even while getting far less energy for their money.

This is an unsustainable irony for Europe right now and for the United States in the longer term. Russia’s energy exports in 2022 are projected to be $338 billion, a third higher than in 2021 before it invaded Ukraine! Russia’s war in Ukraine, at least financially, has been quite profitable. The United States could easily expand production and begin substituting Russian energy not only in Europe but all over the world, including India, Indonesia, and elsewhere—but higher production is blocked by the importance attached to fighting climate change in U.S. politics.

India and others in the “Global South” have stayed neutral on Putin’s war, not because they don’t sympathize with the people of Ukraine, but because they are dependent on oil and gas to run their economies. If America isn’t willing to meet their needs, they must look elsewhere—which by sheer necessity means Russia. Bottom line: We desperately need to work toward disarming Russia of its potent energy weapon by expanding our own production and thereby rearming ourselves.

Unilateral energy disarmament is a bad idea at any time, but especially when at war with an energy-rich enemy. Unfortunately, that’s precisely what’s happening. Europe disarmed first, and America is now doing likewise. Meanwhile, at the recent COP27 Climate Summit, both promised a trillion dollars of their respective taxpayer dollars to poorer countries not to produce fossil fuels plus reparations for prior damages ostensibly inflicted by fossil fuels!

The Biden administration’s energy response to the bloodletting in Ukraine is to ignore the issue. Nowhere in the administration is there any talk of using our own energy weapon. Pro-Ukraine groups that would like to raise this issue won’t do it for fear of an American domestic political reaction.

While Russia finances its war in Ukraine by producing and selling vast quantities of oil, gas, and coal, the Biden administration cancels pipelines, curtails new leases, constrains permitting, and uses over-the-top Interior Department and Environmental Protection Agency regulations to raise the cost and limit the supply of oil and gas. It uses ESG, Environmental Social and Governance rules, to suppress investment in oil and gas infrastructure. It seeks to kill coal entirely through overregulation, even though U.S. Clean Air Act regulations likely make U.S. coal-fired electricity generation the world’s cleanest, and more than one-third of global electricity comes from coal. China is slated to build more than half of the world’s new coal-fired power plants creating some 85,000 megawatts of new electric power. China cherishes electric cars because it doesn’t have oil but it has coal to create cheap electricity to power them.

The Biden administration’s policies have kept the United States still a million barrels per day short of pre-pandemic, pre-Biden, production levels. All of this is done on purpose so that Biden’s Green New Deal climate agenda can move forward, regardless of costs to consumers and risks to our economy and national security.

The United States has the energy reserves and technological capacity to expand production and begin substituting for Russian energy all over the world. The Biden administration is trying to defend Ukraine from Russia, but its climate policies are undermining that support. When will the administration recognize that the Quixotic campaign against climate change is costing thousands of Ukrainian lives and the destruction of a nation?

Don Ritter served fourteen years on the House Energy and Commerce and Science and Technology Committees; was Ranking Member on the Congressional Helsinki Commission and was founding Co-Chair of the Baltic States-Ukraine Caucus. He is a Trustee of the Victims of Communism Memorial Foundation, and Trustee and President & CEO Emeritus of the Afghan American Chamber of Commerce. He holds a science doctorate from MIT.