America Must Drop Its Delusions about Dealing with Russia 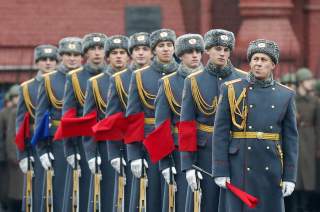 It’s time to part with illusions. For too long, the U.S. national-security community has oscillated in its assessment of the Russian Federation, swinging between viewing Moscow as the country’s number one geopolitical threat to dismissing the challenge of a nation whose per capita GDP equals that of Portugal. This has led to the worst of all satisficing comprises: an approach that views Russia as a competitor and adversary, but which does not require a great deal of investment, because the unstoppable Russian threat of today will evaporate when Russia inevitably collapses under the weight of its economic, political and demographic contradictions.

In 2018, particularly after the reelection of Vladimir Putin to the presidency, the environment is clear. Russia rejects partnership as offered on U.S. terms, particularly if it means having to abide by Western rules of engagement. In taking steps to secure what it believes to be Russia’s national interests, the Kremlin, in turn, has undertaken actions—such as the annexation of Crimea—that have made it impossible for the United States to pursue closer ties with Moscow. The Trump administration of 2018 now has far fewer carrots with which to pursue a strategy of compellence (encouraging Russia to change its behavior in the international and domestic arenas) than the Obama administration had at its disposal in 2014.

The stealth sanctions slipped into the omnibus spending bill, plus the actions taken in response to the Skripal poisoning incident, have now effectively removed any of the positive inducements for compellence for U.S. policy. What remains are tools designed to coerce or compel, as well as increasing deterrent capabilities to discourage Russia from taking further actions deemed to be hostile to U.S. interests.

A sober assessment can only conclude that, as part of a strategy to better deter and contain Russia, the United States must consider increasing spending across a wide range of tools of statecraft, not simply in military procurement, but in areas left to atrophy after the end of the Cold War, such as information and public diplomacy. It must revitalize key alliances—and be able to decide what irritants with allies needed in this effort (for instance, trade policy with Germany and Korea) need to be set aside. So far, however, there is no evidence that much of a national conversation about what would be required to undertake this approach is going on. The inside-the-Beltway analyses about new strategies vis-à-vis Russia are not being translated into clear communications by American politicians across the heartland regarding the burden Americans will be asked to shoulder and why it matters to U.S. security.

Indeed, my read is that there is real reluctance to do so. Instead, the hope is that the circle of the costs of containing Russia can be squared by factors—illusory ones, in my opinion—that will avoid the need to ask Americans to shoulder those burdens.

One illusion has already been pierced: the idea that in the wake of the Kremlin stage management of the March presidential elections, the Russian people would rise in protest to sweep aside the Putin team, as happened in Serbia in 2000, Georgia in 2003 and Ukraine in 2004 and 2014. Somehow the Russia challenge would then be solved if a President Aleksei Navalny or Ksenia Sobchak was seated in the Kremlin.

The second illusion is that Russia’s trend lines are negative. This is true—with predictions about Russia’s relative economic size and military power by 2050 showing radical diminishment. But for the next several years, Russia retains sufficient legacies of economic and military power to remain a global player. A strategy of waiting for Russia’s collapse in 2050 seems foolhardy as an approach to the challenges that must be faced between 2018 and 2024.

Similarly, the fact that U.S. policy has, over the last several years, been driving Moscow and Beijing into a closer strategic embrace—a negation of four decades of American strategic logic that dictated the necessity of keeping Russia and China more invested in their relationship with the United States than with each other—seems to be dismissed by pat references to past bad blood between the two countries. Yes, Russians worry about a Chinese threat to the Russian Far East, and Chinese still would prefer to reverse Russia’s imperial gains of the nineteenth century. But strategic establishments in both Moscow and Beijing have shown the capacity to set aside nationalist sentiments and to see the benefits of closer cooperation. Again, a Chinese superpower in 2050 may succeed in retaking Eastern Siberia for Beijing—but it is foolhardy for the United States to sit back and make strategy based on an assumption of eventual Sino-Russian enmity.

Cutting a series of geopolitical deals with the Kremlin is an impossibility as long as Putin remains in power. Given his approach over the last two years to begin cultivating a new generation of leadership in Russia, Putin’s eventual successor is likely to continue his approach. The United States must now contemplate the tradeoffs it will have to consider in its foreign policy. Weaken Russia’s hold over Eurasia by peeling China away from its strategic partnership by conceding to Beijing its preferences in the South and East China Seas? Leave the Iran deal largely in place and encourage Tehran to diminish its reliance on Moscow? Overcome domestic resistance to trade by revitalizing the Trans-Pacific Partnership and the Transatlantic Trade and Investment Partnership as new geoeconomic structures to complement U.S. security ties in the Pacific and Atlantic basins? Subsidize the price differential between Russian natural gas and U.S. shale gas, to convince European consumers to diversify in that direction? Recommit to further NATO enlargement?

Putin seems to realize the challenges of moving into a longer-term period of confrontation and competition with the United States, and is adjusting his strategy. So far, the U.S. response remains reactive and episodic.

It’s time to part with illusions. Otherwise, the United States cannot develop and execute a sustainable policy towards Russia.

Image: Servicemen line up during a military parade in Red Square in Moscow, November 7, 2014. Reuters/Maxim Shemetov