America Must Face Up to the China Challenge 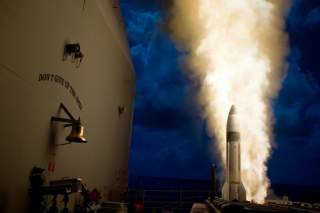 Regular readers of the National Interest enjoy a rich flow of essays debating the consequences of China’s return as a great power and how U.S. policy makers should respond to the challenge China’s rise will create for U.S. interests in the Asia-Pacific region and around the world.

But elsewhere in Washington’s corridors of power and across the country, the subject of China’s rise, its implications for U.S. and regional security, and how U.S. foreign policy should adjust to this development is commonly treated like the proverbial elephant in the room, clearly present, but not clearly discussed.

U.S. policy makers and the American public must face up to the fact that China’s return as a great power is inevitably creating a contest that will likely evolve into the most consequential and taxing security challenge the United States will face in the decades ahead. It will be the most consequential because the stability and prosperity of the Asia-Pacific region is of paramount importance to America’s economy, its standard of living, its future prosperity and its own role as a global power. It will be the most taxing, because China will have at its disposal far more resources than the Soviet Union ever dreamed of having. The Cold War security competition demanded much of the United States; the China challenge will demand as least as much, if not more. The China challenge is the elephant in most rooms in Washington perhaps because the magnitude of the challenge is so unsettling to policy makers and planners.

Nevertheless, U.S. policy makers and America’s political system will inevitably have to face up to the China challenge. Indeed, there are four harsh realities with which America must soon come to terms.

First, the next American president and his or her advisers will need to face up to the fact that a policy of forbearance toward China has now been tried and has failed. Forbearance has been a bipartisan policy. In 2005, former deputy secretary of state Robert Zoellick politely asked China to be a “responsible stakeholder” in the international system, with the hope and expectation that China would see its interests best fulfilled by cooperating with the existing international system. Kurt Campbell, the assistant secretary of state for Asia during Barack Obama’s first term, argued for a policy of conciliation in order to avoid the “Thucydides Trap,” the tragic clashing of great powers that has littered so much of world history. It was defensible to have tried forbearance first. However, China’s response since 2008 to forbearance has been clear: more assertiveness, more salami-slicing and an acceleration of its military modernization. Part of the deal of trying forbearance first must include a willingness to admit when it has run its course. The next set of U.S. policy makers will have to acknowledge the end of forbearance as a useful China policy.

Second, U.S. military commanders and planners have to face the fact that their traditional operational concept in the Western Pacific—a reliance on short-range aircraft and firepower operating from heretofore (but no longer) secure, large and concentrated forward bases and naval task forces on Asia’s immediate periphery—can no longer work now that China is fully exploiting the missile and sensor revolution. Recent attempts to compensate for China’s growing missile inventories by stationing even more vulnerable short-range forces in the theater only compounds the danger by creating the incentives for both sides to strike first during a crisis. The U.S. military needs to break with operational and procurement habits built up over seven decades—not an easy thing to do.

Third, Congress and the military industrial base must face up to the adjustments that come with rebuilding U.S. military forces around long-range, rather than short-range aircraft, more submarines and fewer large surface ships, and the need for a portfolio of theater-range missiles for all the services, an idea now largely absent from the program of record. Congress and the contractors will not look kindly on the large and disruptive changes to procurement policy for which the China challenge now calls. But with an open mind, adaptation need not be painful.

For example, as part of its cost and risk management, the new U.S. Air Force Long-Range Strike Bomber program uses already-proven subcomponents. One possibility going forward could be the cockpit and combat systems from the F-35. With the bomber’s use of such components, there is no reason, for instance, why Lockheed-Martin and its network of suppliers should suffer if the F-35 program subsequently gets trimmed. This should especially be the case when the new bomber aircraft can be used for so many other missions besides traditional strike (as explained here). In this view, the Pentagon could use far more than the eighty to 100 Long-Range Strike airframes currently contemplated.

For the Navy, cutting back on the future construction of vulnerable surface ships can and should be offset by a much larger submarine fleet. The Navy’s goal of forty-eight attack subs is far too few, especially when surface ships will have to back away in the Western Pacific due to China’s extensive and growing anti-ship missile threat. Thus, with the need for a much-larger-than-planned submarine fleet (including more of the large Trident replacement submarine hull, which can be used for a wide variety of missions beyond the sea-based nuclear deterrent), there should be plenty of work ahead for U.S. shipyards after they adapt to this demand. The Congress and the contractors have to face up to change, but should view this as an opportunity, rather than a problem to be opposed on Capitol Hill.

Finally, the American public has to accept that there is no rest for the weary. The American people took on the four-decade burden of facing down the Soviet Union and are now engaged in another twilight struggle against radical Islamism. The China challenge is next and will likely be the toughest challenge of all, due to the resources that will be available to the challenger. Complicating matters in the minds of the public is the deep economic and financial interdependence between China and the United States. It has been two hundred years—since the War of 1812—that the United States had a serious security competition with a power that was simultaneously a major economic and financial partner. That awkward duality almost caused the New England states, who opposed the Virginians’ foreign policy, to secede from the union. Deepening commercial ties with China are likely to substantially complicate the debate inside the United States over security policies in the Asia-Pacific region. But in spite of these complications, the U.S. public will have to come to terms with the open-ended burden the China challenge represents.

The 2016 U.S. presidential-campaign season will soon begin. What will the candidates say about the geostrategic challenge presented by China? Will they largely ignore the issue, as in past campaigns? Or will they use the campaign to educate the public on the serious challenge to come and the burden the United States will have to assume in the decades ahead, not for charity, but to protect America’s own vital interests? Ideally, U.S. presidential candidates should use the campaign season as an opportunity to educate the public on the looming challenge. Better that than to spring a surprise on the public in 2017 or thereafter. Naturally, presidential-campaign managers are likely to have a different opinion on this.

So, regarding China, there is a lot the United States has to reckon with in the years ahead. Very little of the U.S. public and only a few leading policy makers are engaged with this challenge. That will have to change if the United States and its partners are to maintain stability and prosperity in the Asia-Pacific region.

Robert Haddick is an independent contractor at U.S. Special Operations Command. He writes here in a personal capacity. His book “Fire on the Water: China, America, and the Future of the Pacific,” is now out from Naval Institute Press.