America Must Lead on Venezuela 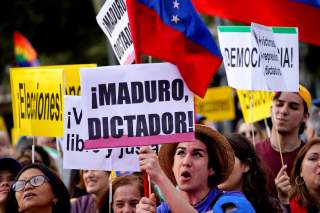 A failed socialist state in South America threatens all four interests because Russia is prolonging and deepening that disaster in order to harm the United States.

As Venezuela failed, like Syria, its citizens became refugees by the millions. The resulting humanitarian crisis is crippling its neighbors: four million have fled to Brazil, Ecuador, Columbia and Panama. The surge of displaced are crushing the struggling economies of those countries and will start to look further north for sanctuary. Venezuelan refugees have begun to appear on the U.S. southern border, and it is only a matter of time before south and central America chooses to relieve its burden by placing them in a caravan to send here, like the Syrians who trekked to Germany. The American homeland will be faced with potentially millions of refugees, with no hope of returning until Venezuela becomes a functioning, wealthy nation again.

As Venezuela failed so did its oil production, and U.S. gas prices have risen in turn. As Venezuelan oil evaporated from the world market, the Organization of the Petroleum Exporting Countries has been reinvigorated, and money has poured into the oil coffers of Iran and the banks of Russian natural gas. While our economy suffers our allies become more reliant on our opponents.

As Venezuela failed in our backyard, America lost respect in the diplomatic world. China found influence where our forward diplomatic presence retreated, weakening our hand with the rest of the Americas. When the United States appears weak or disinterested, it becomes more difficult to build coalitions and catalyze opportunities in the stable democracies surrounding a failed state. Our allies will look to us only so long as we look back. Moreover, the threat of sanctions only works if nations value their economic ties with America more than with our competitors. America must lead.

As Venezuela failed, the victims of socialism lost fundamental individual liberties, freedoms of religion, speech, the press, and assembly. They lost their liberty, free enterprise, equal justice under the law, and the dignity of human life.

America is a positive force in the world for peace and prosperity. We have been an example since our founding and an agent of change for the last century. Europe is free because of us. Japan, South Korea and much of Asia are free because of us. Tens of millions of Muslims voted in Iraq and Afghanistan because of us. American influence is at its zenith when we encourage aspiring democracies in fragile states to reform, especially when the forces of evil are content to make the innocent suffer. It is our vital national interest to advance American influence by supporting the dignity of individuals and reducing human suffering.

Why does Venezuela matter to us? Because acting to stabilize this failed state in our backyard will protect our homeland, our prosperity, our peace and our influence.

As President Trump remarked when he was in Poland, “Above all, we value the dignity of every human life, protect the rights of every person, and share the hope of every soul to live in freedom. That is who we are.”

Sen. Steve Waugh was a member of the Maryland State Senate (2014–2018). Waugh is a Senior Professional Staff member at the Johns Hopkins University, Applied Physics Laboratory (JHU/APL), working in this position for over ten years. Senator Waugh served twenty years in the Marine Corps as an AV-8B pilot rising to the rank of lieutenant colonel, and worked at NAVAIR serving as a Deputy PEO and War Council Chairman. He holds a BS in Aerospace Engineering from USNA, and an MBA in Technology Management from University of Phoenix, and is currently a doctoral student.