America Must Maintain Its Commitment to Refugee Resettlement 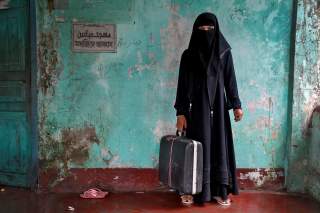 In an unfortunate case of evidence-free policy-making, some White House officials seem determined to dramatically diminish, if not dismantle, an American tradition of refugee resettlement that has long reflected U.S. humanitarian values and national security interests. Without consultation with the Congress as prescribed by the U.S. Refugee Act, President Donald Trump’s March Executive order suspending the refugee resettlement program effectively slashed the 2017 U.S. refugee admissions ceiling from 110,000 to about 50,000. Based on information from a number of administration sources, it seems unlikely that the president will approve admission of more than 45,000 refugees in 2018, and he may in fact decide on a lower level. This would contrast starkly with the nearly 100,000 that the United States has annually resettled on average over the past three decades.

These developments would not be surprising, given the president’s statements suggesting that the U.S. refugee resettlement program is a threat to national security. Echoing his campaign commitments promising a ban on Muslim immigration, the president’s Executive Order also targeted visa applicants from six predominantly Muslim countries, and stoked fear and hostility toward Muslim refugees in particular.

The notion that the U.S. Refugee Admissions program poses a threat to U.S. national security is nonsense. Nobody who enters the United States is subjected to a more rigorous screening than a refugee applicant, and refugee processing involves the active engagement of U.S. law enforcement, security and intelligence agencies. For this reason, it’s hardly surprising that while there have been nearly one million refugees resettled in the United States since 9/11, there have been no fatal terrorist attacks in the United States perpetrated by a resettled refugee over this period.

Unfortunately, the silly debate about the threats posed by refugees has come at the expense of discussion of the values and interests served by refugee resettlement. The 1980 Refugee Act, passed by overwhelming and bipartisan majorities in the House and Senate in 1980, created the U.S. Refugee Admissions Program. Under the program, the United States resettles a modest number of particularly vulnerable refugees from the countries to which the refugees have first fled, known as countries of first asylum. The Refugee Admissions Program is an expression of a U.S. commitment to meet its humanitarian obligations and exercise leadership in the worldwide effort to assist displaced victims of persecution and conflict, who now number more than 65 million around the world.

To be sure, the Refugee Admissions Program can only be the solution for a small percentage of the world’s refugees. But for the most vulnerable, the U.S. program can be life-saving. Moreover, refugee resettlement provides the United States access to extraordinary individuals. From Albert Einstein to Madeleine Albright to Sergey Brin to so many others, refugees have benefited the United States enormously. Moreover, as reflected in a recent study from the National Bureau of Economic Research and the bulk of scholarship in this area, the economic benefits provided by refugees—who also help to revitalize local communities—outweigh the financial costs to the United States in supporting their resettlement.

Finally, a generous U.S. Refugee Admissions program has significant and substantial foreign policy benefits. The United States is encouraging governments around the world to sustain generous policies toward refugees. In Jordan, Turkey and Lebanon, for example, that has included urging that borders be kept open and that governments provide opportunities for education and employment. Because such approaches promote well-being and stability among displaced populations, they serve U.S. national security interests. But the United States can only promote such approaches most effectively when friends and allies see that we are practicing at home what we preach abroad.

For all these reasons, now is not the time for the United States to be walking away from its historic leadership in refugee resettlement. The Refugee Act mandates that the president determine a refugee admissions number by the end of this month, and Trump ought to substantially increase the level for 2018. As we saw most recently in his negotiation on the debt ceiling with Republican and Democratic leaders, this is a president who enjoys surprising people. Reverting to a refugee admissions level of, say, more than 100,000 would be just such a surprise, and would honor the challenges and sacrifices of the millions of refugees around the world.