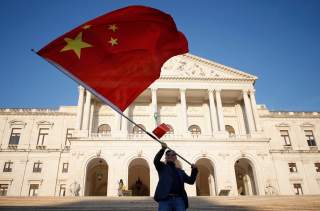 September 11, 2001 might have provided the jolt that we desperately needed. But the younger Bush administration misused it. And even if it had not, 9/11, as significant as it was, was a one-time security event that cannot compete with a decades-long competition with China.

COMPETITION WITH China can teach us about priorities, which are the mainstays of grand strategy.

One priority should be to effectively get out of the Middle East. Every extra day that the United States is diverted and bogged down in the Middle East with significant numbers of ground troops helps China in the Indo-Pacific and Europe even, where China is working to establish powerful commercial shipping footholds in places like Trieste on Italy’s Adriatic shore and Duisburg in riverine Germany; to say nothing about promoting its 5G digital network. I don’t mean to say that we should pull all our forces out of the Middle East tomorrow. I mean that our goal should be to reduce our military footprint as quickly as practically possible, whenever and wherever possible.

For example, the United States has had combat troops in Afghanistan for almost two decades with no demonstrable result. The future of Afghanistan will be decided by competing ethnic alliances within that country, and Indians and Iranians squaring off against Chinese and Pakistanis. The Indians and Iranians will build an energy and transport corridor from Chah Bahar in southeastern Iran north through western Afghanistan into former Soviet Central Asia. The Chinese and Pakistanis will try to build another such corridor from Gwadar in southwestern Pakistan north, parallel with the Afghan border, to Kashgar in western China. In particular, Pakistan, which will always require Afghanistan as a rear base against India, must, therefore, struggle against India in Afghanistan. India, whose own imperial past encompasses the eastern half of Afghanistan, will do everything possible to thwart Pakistan there. Russia, which lies just to the north of Afghanistan, will also play a role because of its interest in smothering radical Islam. A great game is about to ensue in Afghanistan in which the United States will play absolutely no part, regardless of how much blood it has shed there, because it lacks a geographical basis for it, and therefore has little or no national interest at stake.

All we can do is help stabilize Afghanistan so that the Chinese and others can more safely continue to establish mining and other operations in the country. In any case, building a strong central government in Afghanistan may prove chimerical since none has ever existed in Kabul. The city has traditionally functioned as a central point of arbitration for the various warlords and tribal leaders that have exercised effective control in southern Central Asia. Covering the war against the Soviets in Afghanistan in the 1980s, I saw vividly how the Soviets lost because the mujahidin enemy, a diverse collection of tribal-based groups which viciously distrusted each other, provided the Soviets with no useful point of attack. Afghanistan’s very disorganization defeated the Soviets, just as it has been defeating us.

Iran, of course, so populous and well-educated, and fronting not one but two hydrocarbon-rich zones (the Persian Gulf and the Caspian Sea), is the demographic, economic and cultural organizing principle of both the Middle East and Central Asia. But what happens inside Iran will be internally driven. Iranians have a civilizational sense of themselves equal to that of the Indians, Chinese and Japanese. Even dramatic American diplomatic actions, like signing a nuclear deal with it, and later abrogating that same deal, can have only a marginal effect on Iran’s confoundedly-complex domestic politics in a country of over eighty million people. Despite periodic street demonstrations which will continue, the very institutionalized strength of the Revolutionary Guard Corps and other regime organizations make Iran perhaps the most stable big state in the Muslim Middle East.

As for Iraq, the inching forward of political stability there, however messy and fragile, has had relatively little to do with what the United States has done; or has not done. In fact, improvement in the Iraqi political situation has, for the most part, occurred despite American actions; not because of them. One American president destabilized Iraq by toppling its totalitarian ruler. The next American president further destabilized it by suddenly withdrawing American troops. Thus, from the anarchy of Iraq after Saddam Hussein came for a time the tyranny of the Islamic State. It was the experience of living under the Islamic State that convinced many Sunnis that they were better off allying with Shiites than with radicals of their own sect. It is this fact that has given Iraq some measure of hope and stability. True, American special operations forces helped a moderate Shiite leader defeat the Islamic State. But this moderate Shiite leader was subsequently defeated at the polls. In short, Iraq will determine its own destiny, influenced by Iran, the great power next door. American influence will remain marginal, whether or not we have any troops there. I say this as someone who initially supported the invasion of Iraq, which I have come to bitterly regret.

As for Syria, Bashar al-Assad has reconsolidated power in the only part of Syria that ultimately counts: its main population centers. Israel, buttressed by massive American military and economic aid, will be able to deal with the Iranian presence in Syria on its own. If the Russians want to get bogged down in Syria for the sake of their decadeslong investment in the Assad family regime, good luck to them. And by the way, Israel, unlike the United States, has a workmanlike, albeit problematic, relationship with Russia which it can employ as a go-between with Iran. The United States benefits very little by diverting time and resources to Syria.

The United States needs to end its adventures in the Middle East begun immediately after 9/11. Of course, the Chinese hope we never leave the Middle East. For if we deliberately defeat ourselves by remaining militarily engaged in the Middle East, it will only ease China’s path to global supremacy. Indeed, China would like nothing better than a war between the United States and Iran. China is already Iran’s largest trading partner and is pouring tens of billions of dollars into port, canal, and other development projects in Egypt and the Arabian Peninsula, proving how America’s military involvements in the region have gotten it virtually nowhere.

NO PLACE in the Muslim Middle East can serve as a litmus test of how we are doing vis-à-vis China the way that India and Taiwan can. They are the pivots that will go a long way to determining the strength of the American position in the Indo-Pacific: the first-among-equals when it comes to global strategic geography.

India is not a formal American ally and should not become one. India is too proud and too geographically close to China for that to be in its interest. But India, merely on account of its growing demographic, economic and military heft, along with its location dominating the Indian Ocean, acts as a natural balancer to China. Therefore, we should do everything we can to enable the growth of Indian power, without ever even mentioning a formal alliance with it. An increasingly strong India that gets along with China while never moving into China’s orbit—and is informally aligned with the United States—will be a sign that China is contained.

Taiwan has been a model ally, a stable and vibrant democracy, and one of the world’s most prosperous, efficient economies. It is a successful poster child for the liberal world order that the United States has built and guaranteed in Asia and Europe since World War II. Richard Nixon and Henry Kissinger opened relations with China, but did so without endangering Taiwan. Therefore, if it ever became clear that the United States was both unable and unwilling to defend Taiwan in the event of a Chinese military attack on the island—or that an authoritarian China had consolidated its grip on Taiwan without the need of such an attack—then it would signal the end of American strategic dominance in East Asia. Countries from Japan in the north to Australia in the south would have no choice but to seek compromising security assurances from China in the event of such an eclipse of American power. This would be an insidious process often outside the strictures of the news headlines, but one day we would all wake up and realize that Asia has been partly Finlandized and the world had changed. Chinese domination of Taiwan would also, by the way, virtually confirm China’s effective domination of the South China Sea, which, together, with its port building activities to the east and west of India, would help give the Chinese navy unimpeded access to two oceans.

Grand strategy is about recognizing what is important and what is not important. I am arguing that, given our goals, India and Taiwan are ultimately more significant than places like Syria and Afghanistan. (Regarding Russia, because it is not almost at war with China as it was when the Nixon administration played the two communist regimes off against each other, moving closer to Russia now achieves little, though stabilizing our bilateral relationship is in our interest.)