America Must Rethink Its Assumptions about Russia 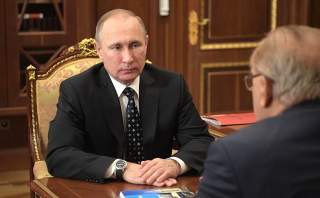 I rarely find myself nodding in full agreement with Masha Gessen’s writings, but her critique of the deficiencies of the U.S. analytic community in terms of the inquiries into Moscow’s efforts to sway the 2016 American elections is spot on. She ends her account with a warning that the U.S. government’s “Russia expertise is weak and throws into question their ability to process and present information.”

It is clear that the Trump national-security team does not have a unified view of Russia, the extent to which current actions of the Russian government pose a threat to vital U.S. interests, or what steps ought to be taken so that Washington can deal with the Kremlin from a position of strength. As with the Obama and Bush administrations, the first months of the Trump administration will most likely be taken up with an extensive review of U.S. policy towards Russia and Vladimir Putin. Whether the new administration ends up adopting a policy of greater engagement or continued confrontation with the Kremlin, it will be important for any decision to be rooted in rigorous analysis of Russian realities rather than ideological beliefs or, even worse, mirror imaging—assuming that Russians will react the same way to the same set of events as Americans would.

It is no secret that Russia has taken steps in its foreign and domestic policies in recent years that clash with U.S. preferences. A series of proposals were advanced—and some adopted by the Obama administration—in the hopes of changing the Kremlin’s calculus and bringing about a change in behavior. For the most part, those hopes have been dashed, and confident statements made by the outgoing team for the last several years about Russian isolation and weakness have not been borne out by events.

Much of the attention (and thus resources) of the U.S. analytic community (and the larger foreign-policy community) are still devoted to issues arising out of the 2016 elections. While understanding what happened is important, I believe it is also crucial for time and effort to be spent answering a series of questions for which there are no ready answers—but which are critical if new, more effective policies are to be formulated. After three years of sanctions, increased confrontation between Russia and the West, and the first major combat operations undertaken by Moscow “out of area” since the collapse of the Soviet Union, it is clear that a number of the verities taken as gospel truth about Russia, particularly by American politicians, need to be revisited. Contrary to many public statements of U.S. experts, the Putin administration has seemed to be able to survive Western economic sanctions, collapsing energy prices and the strains caused by military action. Why?

One area that appears to have largely been ignored is to examine how much maintenance of Russia as a great power seems to matter to many Russians’ own sense of personal identity and well-being. We often hear the statistic about Russia, in terms of the level of personal consumption, having the economic status of Portugal—and since average Portuguese were unwilling to sacrifice to maintain their status as a major colonial power, culminating in the 1974–75 “Carnation Revolution,” why would ordinary Russians want to see their standard of living decline because of the Kremlin’s foreign-policy adventures? But there does seem to be something there—that Russians believe that Russia’s standing in the world connects in a personal way to their own sense of worth—or that there is a fear that a sufficiently weakened Russia unable to project power in the world would find itself at the mercy of others. Is the equation that we have seen over the past several years, that Russians will accept a 20 percent or so decline in living standards in order to sustain the annexation of Crimea, represent an accurate assessment of the trade-offs Russians will accept, certainly with plenty of grumbling but falling short of generating significant political action? I don’t have an answer, but I also have not found much discussion of this question in the varied discussions of Russia and the impact of sanctions. If the answer tends towards the affirmative, then Secretary of State–designate Rex Tillerson’s earlier observations about the utility of the current level of Western sanctions to force significant change in Russia bear revisiting, with the United States needing to think about different and more effective types of sanctions or adopting different tools for shaping Russian behavior.

Linked to this question is Russian societal tolerance for casualties as a result of Russian military interventions. Thirty years ago, a steady flow of coffins from Afghanistan helped to delegitimize Soviet claims, both that the intervention was going well and that the losses were worth it. But are we overapplying the lessons of Afghanistan—and superimposing an American overlay where preoccupation with casualty avoidance is the third rail of any U.S. military action these days?

Once again, the data seems to be mixed. Losses of regular Russian military personnel fighting in Ukraine do appear to have been deliberately cloaked, but was this because of fears of negative social reactions, or because Moscow felt it absolutely necessary to maintain its story that there were no Russian citizens present in the Donbass in any official capacity? The impact of casualties from Syria is also hard to assess, so again, it remains difficult to determine the tolerance of the Russian public for combat losses. My sense is that missions defined either as vital to Russia’s homeland security or as waged in defense of Russian interests and commitments (as in Syria, where an important context often ignored in American assessments is the casting of Russian intervention in the domestic media as Russia honoring its commitments to save those Christian, Alawite and “moderate” Sunnis who are looking to Moscow for protection) can retain public support for a time, whereas by the mid-1980s, Afghanistan was seen as a lost cause.

There also seems to have been an underappreciation of the mobilizing power of Russian nationalism in favor of economic determinism—in other words, that Putin’s base of support only rested on the broad social contract of the 2000s, in which Putin’s ability to unilaterally set the Russian political agenda was directly connected to improving the standard of living. (This assessment also needs to be revisited in the case of China as well.) That Russian nationalism has continued motivating power should have been readily apparent during the 2014 Sochi Olympics, when even the most anti-Putin, pro-American segments of the Russian intelligentsia and political class nevertheless took great offense at the apparent glee of American commentators publicizing every last fault and mistake in how the games were executed.

Finally, we need an accurate assessment of the Russian energy industry, its strengths and weaknesses, and, most importantly, its actual cost points. Again, misapplying the lessons of the 1980s—when Soviet dependency on high oil prices was a major Achilles’ heel that Saudi Arabia, as the global swing producer, could exploit by ramping up production—the blithe expectation that a repeat performance would bring about the same results ignores the fact that the Russian energy industry is better managed, more resilient and more flexible than its hidebound Soviet predecessor. The throwing out of various price points at which Putin would find himself unable to continue his policies turned out not be based in reality.

A year ago, I was hearing confident predictions about how Western sanctions, low energy prices and military quagmires (aided by assistance to Syrian rebels and the Ukrainian military) would force the Russian government to change course, especially in Ukraine and Syria. Today, Bashar al-Assad is in a stronger position than at any time since the start of the war in 2011 (and will still be in office after Barack Obama leaves), the Russians show no signs of leaving Crimea or abandoning the Donbass, and the Saudis negotiated an end to the oil price war while the European and Japanese sanctions regimes on Russia appear to be on their last legs. It is true that a plan never survives first contact with the enemy, but this also suggests that some of the analytical assumptions about Russia were flawed.

Mike Pence, Jim Mattis, Rex Tillerson, Michael Flynn and Dan Coats have all expressed positions on Russia that are at odds with each other and, at time with the statements and tweets of Donald Trump himself. At the end of the day, however, whatever position on Russia wins out should be rooted in analytically rigorous and dispassionate analysis. Bismarck’s aphorism that Russia is never as strong as she thinks or as weak as she looks is one that Americans, who either want a ten-foot tall opponent or a house of cards in the Kremlin, have difficulty processing. The American analytic community has to help the new administration come to grips with this core reality about Russia, no matter whether it is going to be friend, foe, or something in between.