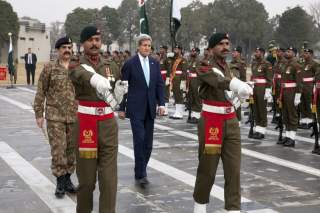 Fifth, the United States must work with greater alacrity to expand the persons who can be designated under UN Security Council Resolution 1267. Individuals so listed cannot travel, cannot have a back account, and are not entitled to possess weapons. Admittedly, the third deprivation cannot be enforced when they enjoy state sanctuary like that provided by Pakistan. No doubt, China will bleat about such concerted efforts to list persons associated with Pakistan’s terror apparatus, because China is Pakistan’s proxy on the security council. The United States should not endure this; China must be persuaded that it is not to China’s international standing to continue defending the indefensible. As it is, China’s behavior in the international system shows little regard for international norms of behavior. China’s complicity in protecting Pakistan’s terrorists requires greater political and diplomatic pressure by all members of the security council.

In anticipation of a potential Indian retaliation, Pakistan is once again brandishing nuclear threats. The United States should take a clear stand that should Pakistan use nuclear weapons against India, India will not be left alone to respond. To do otherwise is to demonstrate to Indians that the United States in fact doesn’t value the thousands of Indian lives that Pakistan’s proxies snuff out with impunity. This impunity must end.

C. Christine Fair is an associate professor at Georgetown University’s Security Studies Program and a visiting fellow at IDSA. Most recently she is the author of Fighting to the End: The Pakistan Army’s Way of War and co-editor of Pakistan’s Enduring Challenges.