America Must Stand Up For Human Rights in India 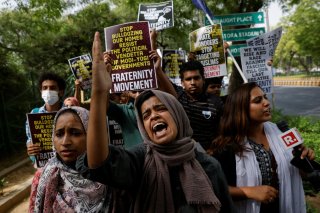 Violence against religious minorities has grown rapidly under the rule of Prime Minister Narendra Modi as his Hindu nationalist Bharatiya Janata Party (BJP) moves to dismantle India’s secular system of government and enshrine Hindu supremacy. Members of the BJP and its affiliates have attacked and killed Muslims for alleged “crimes” such as transporting beef or entering into consensual relationships with Hindu women.

But in recent months, anti-Muslim incitement and attacks on Muslims, their property, and their places of worship have taken on a more pernicious form, indicating the emergence of a permanent campaign against the country’s 200 million Muslims explicitly involving the machinery of the state. The United States, which has aggressively courted India as part of its China containment or “Indo-Pacific” strategy, can no longer choose to look away.

The state of Uttar Pradesh is a harbinger of India’s dark future. Earlier this year, Yogi Adityanath, a Hindu monk who founded a vigilante organization, returned to power as the state’s chief minister. His first term in power was marked by the fusion of Hindu religious authority with coercive political power, using the pretense of “law and order” to brutalize the state’s Muslim population. For example, in 2019, police in Uttar Pradesh killed over twenty Muslim protestors after Adityanath’s call for “revenge.”

Adityanath’s return to power for a second term this year has validated the political efficacy of the so-called “Yogi model.” This year, police in his state have razed the homes of Muslims involved in protests against Islamophobia. Mainstream Indian news channels hail him as the “Bulldozer Baba” and insinuate that the militant monk—who could succeed Modi later this decade—has finally put “those Muslims” in their place. The Yogi model is spreading elsewhere in India as part of a concerted campaign to effectively forcibly assimilate Muslims and neutralize or eliminate their presence in the public sphere.

As part of this campaign, Hindu extremists are intensifying efforts to convert historic mosques into Hindu temples, aided by Indian state institutions, such as the courts. In 2019, the Supreme Court of India awarded the entire site of the sixteenth-century Babri Mosque—destroyed in 1992 by Hindu extremists—to Hindu religious groups who claimed that it was originally the birthplace of the Hindu deity, Ram.

The dubious Babri Mosque decision has emboldened Hindu extremists, who now have their eyes on other mosques and Islamic sites,  including the Taj Mahal, which is an Islamic mausoleum. Instead of mob violence, the BJP can now use compliant state institutions, like the courts, to seize control over Islamic heritage sites and erase markers of Muslim civilization.

After the police and courts, India’s military services could soon become corrupted by Hindu nationalist groups like the Rashtriya Swayamsevak Sangh (RSS)—the parent group of the BJP. The Modi government’s newly proposed Agnipath program—which proposes the induction of soldiers on temporary, four-year contracts—is ostensibly aimed at containing the military’s growing pension obligations. But critics allege that Agnipath is a Trojan horse for RSS infiltration of the military. And they warn that some of the tens of thousands who exit the armed forces after completing their contract service will “militarize” Indian society and could be deployed by militant Hindu groups.

India’s present course is alarming but unsurprising. When Modi assumed the premiership in 2014, he brought with him the blood-stained legacy of his rule over the Gujarat state, where he presided over pogroms in 2002 that left more than a thousand people, mainly Muslims, dead. A bar on his entry into the United States was lifted simply because he was elected as India’s prime minister. And successive U.S. administrations have not only avoided offering a meaningful public response to the surge in violent Hindu extremism, but they have also arguably played an enabling role.

In 2015, President Barack Obama authored a profile of Modi in Time magazine, hailing the Hindu nationalist as a leader who “reflects the dynamism and potential of India’s rise.” And President Donald Trump simply ignored the deadly anti-Muslim pogroms that literally took place just miles away from him when he visited the Indian capital in January 2020. Trump even shook hands with the militant monk Adityanath.

While Modi’s stewardship of India’s economy and pandemic response has been poor, he’s been buoyed by perceptions of strength, shaped partly by the West’s fear of criticizing him on human rights and continued partnership with Russia. This inhibition must cease.

In April, for the third consecutive year, the U.S. Commission on International Religious Freedom (USCIRF) recommended that the State Department designate India as a “country of particular concern” (CPC) in its annual religious freedom review. The Trump and Biden administrations have declined to even put India on its special watch list—a lesser designation. But continuing to do so undermines America’s credibility as a defender of religious freedom. And it emboldens India’s Hindu nationalist leadership at an ominous juncture in the country’s history.

What takes place in India is extremely consequential for the future world order. India will soon be the world’s most populous country. The continued allowance for an “India exception” on religious freedom reinforces the perception that Washington uses human rights only as a tool against its geopolitical adversaries. And it undermines the very important advocacy America is doing on behalf of those persecuted by our strategic rivals, such as the Uyghur Muslims in China.

Later this year, the State Department should designate India as a CPC and sanction individuals directly involved in the anti-Muslim pogroms during Trump’s 2020 visit. Yes, India will be unhappy, but the United States has sanctioned institutions and officials elsewhere in the region—including in Bangladesh and Pakistan—deemed guilty of serious human rights violations. India deserves no exception. And we can afford to press it. With a rising China on its borders, India needs us more than we need them. And if America is to remain a credible voice on the issue of religious freedom, it must take a stand against human rights violations in India, before the country is beyond the point of no return.