America Must Take a Stand in the South China Sea 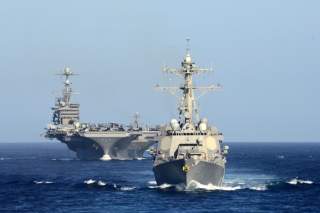 The South China Sea is center stage for Asia’s intensifying maritime competition.  China is incrementally but inexorably moving to assert its claim over the vast majority of that semi-enclosed body of water, which covers more than twice the area of Alaska.  Back in 2010, when Chinese heavy-handedness was resonating throughout the region, Beijing hinted that the South China Sea was now a “core interest.”  Yet it is not just China (and Taiwan) that border on that marginal sea, but also six Southeast Asian states harboring their own legitimate concerns about sovereignty and security.

Beyond Asia, the South China Sea is at the nexus of the global economy upon which all major trading nations’ prosperity depends.  About 90 percent of global commercial trade is seaborne, and more than a third of all that trade crosses the South China Sea.  Yet the South China Sea is the epicenter of China’s maritime buildup, and the same vicinity within the so-called “first island chain” where America’s ability to project power in support of freedom of the seas is increasingly open to question.

China’s newfound capabilities and misplaced faith in its own precarious authoritarian system are the main sources of instability.  As Orville Schell recently observed, China’s “new confidence in its wealth and power has been matched by an increasingly unyielding and aggressive posture abroad that has been on most vivid display in its maritime disputes in the South and East China seas.”

Although China is not exclusively to blame for unilateral changes to the status quo, it is by far the most frequent and egregious flouter of regional norms and international law in this maritime commons. China is resorting to tailored coercion to alter facts on the ground and create new ground as well.  It’s mixing measured amounts of military and law-enforcement pressure, backed by economic, information, legal, and psychological warfare. In the past two years, China has added 3,000 acres of new land to small and submerged features in the South China Sea.

Although the other South China Sea claimants (the Philippines, Vietnam, Taiwan, Malaysia and Brunei) have sought to buttress their sovereignty claims over the decades, their efforts are dwarfed by the scale and pace of China’s activity.  As Andrew S. Erickson and Kevin Bond noted in this publication, “China has managed to create more than 17 times more land in 20 months than all of the other claimants combined over the past 40 years, accounting for 95% of all artificial land in the Spratlys.”

In the hasty excavation process, China’s behemoth dredging machines have inflicted considerable damage to the fragile marine ecosystem.  Sadly, the purpose of this artificial-island and military-base construction binge is to help substantiate a flimsy legal claim to a nine-dash line area covering most of the South China Sea. Beijing undoubtedly wants to fortify its position before next year, when an international tribunal is set to rule in on a case brought by the Philippines regarding the questionable legal basis underpinning China’s claims.

Through incremental, salami slicing moves, China is carving out a sphere of maritime influence that evokes anxiety from neighboring countries and sows doubt about the ability of the United States to serve as an honest broker and effective counterweight.  A new 3,000-meter runway on Fiery Cross Reef, for instance, provides a launching pad for any Chinese military aircraft some 740 miles away from the mainland.  China has recently conducted large-scale naval exercises involving some 100 ships and the firing of 100 missiles in the South China Sea, as well as similar drills in the East China Sea and Yellow Sea.  The show of force is meant to intimidate neighboring states with far less capable military and coast guard capabilities.

Chiefly because of China’s maritime pushiness, all of America’s Asian allies are more concerned about the possibility of abandonment than they are of entrapment.  They want to anchor U.S. presence and commitment to balance China’s more strenuous assertions of sovereignty.  Far from America containing China, it is China’s actions that are driving the region closer to Washington and toward each other.

Unlike the East China Sea, where Tokyo’s resoluteness and Washington’s staunch reaffirmation of the U.S.-Japan alliance have helped to check Beijing’s actions, the South China Sea provides more opportunity for adventurism.  The only regional organization, the Association of Southeast Asian Nations (ASEAN), can provide useful political support and economic cooperation, but the fragility of its consensus is tested whenever confronted with security challenges.

While the Obama administration policy of rebalancing comprehensive power to the region makes eminent geostrategic sense, it suffers from half-hearted follow-through and a dearth of resources.  The signature economic initiative—the Trans-Pacific Partnership, which would begin to create high trading standards for a dozen economies in the first round— remains unfinished.  Similarly, diplomatic efforts, such as repeated demands to halt construction in the South China Sea or call on ASEAN and China to conclude a binding Code of Conduct, appear feckless because they have little chance of gaining purchase.

Even our core strength, our military clout, is perceived by many as a wasting asset.  The refrain that soon 60 percent of our naval forces will be assigned to the region is undermined by the declining size of our overall fleet.  Along with other elements of our armed forces, the steady erosion of our seapower, rather than any precise number of ships, amplifies the loudest message to the region about U.S. commitment and capacity.

Some noteworthy Americans even attempt to trivialize the issue by proclaiming that America should not go to war over a bunch of rocks.  Surely we can all agree on that.  But at stake in the South China Sea is less rocks, reefs, and resources, and much more the future stability of the region and good order at sea.  We can find intelligent ways to defend law and order, on the one hand, and cooperate from a position of strength, on the other.  The aim of our efforts is preserve the post-World War II order we helped to build, and to work with all who are willing to adapt an inclusive, rules-based system for the future.

We can compensate for a diminished fleet size through persistent presence and active security engagement.  Not a day should go by when our forces are not deployed to the South China Sea.  For the longer term, we need to work closely with allies and partners on ways to counter coercion and China’s growing anti-access and area-denial capabilities.  To do this, we will need to find innovative ways to use existing technologies, while selectively leveraging emerging technologies and creating fresh concepts of operation. Even less developed partners can build their cost-effective defensive systems around information technology and inherently defensive systems such as smart maritime mines. More developed allies and partners can cooperate on creating a common operating picture and deploying a resilient network in which the whole is far greater than the individual parts. Such is at the root of the idea of distributed operations, for instance.

All of these military moves will in turn need to be integrated within a larger economic and political strategy.  But China will not be impressed by words so much as deeds. As Beijing continues to militarize the South China Sea, our allies and partners want to know that America’s policy rests on a foundation of strength.

Singapore provides a vital toehold for naval presence, which now includes a handful of Littoral Combat Ships. We are also still waiting on the Philippine Supreme Court to declare the recently concluded Enhanced Defense Cooperation Agreement with Manila to be Constitutional. That should soon pave the way for rotating Marines, aircraft, and vessels through the Philippines to help train and build its limited capacity for maritime domain awareness and coastal self-defense. Access and active engagement can make up for the lack of bases and fleet size.  Follow-through and adequate resourcing are essential.

Fortunately Congress is helping the administration with a new, five-year, $425-million initiative to put some resources behind partner capacity building for South China Sea states.  This is one step in the right direction of helping others help themselves to patrol their waters and airspace, thereby deterring adventurism. Sharing information to create maritime domain awareness and greater transparency is the essential first priority in bolstering the region’s capacity to stand up to coercion.

The United States has also been too timid at times to ensure that unilateral changes to the status quo through force or coercion are met with costs. This was the case when the United States stood aside when China displaced the Philippines from Scarborough Reef.  Likewise, in July of this year, at the height of China’s reclamation activity, we flew P-8 maritime patrol aircraft farther than 12 nautical miles away from the artificial islands, which under international law are allowed no more than 500-meter safety zone.  We should rectify that as soon as possible, certainly before the Chinese bases are fully equipped with military hardware.