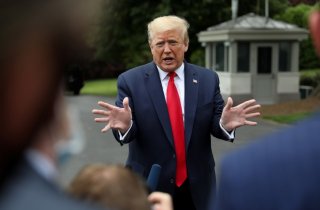 IT IS a situation that seems all too familiar now. An elusive enemy strikes a nation with limitless economic potential. The shockwaves rock the very corridors of power. The attacker came from a malign, faraway place that few have seen and even fewer understand. There is plenty of blame to go around. Clouds of suspicion descend; first upon strangers, then on neighbors and friends. Those fortunate enough to withstand the attack grieve at first, then retreat to their political camps. Unanswered questions abound, and soon the victims’ indignation transforms into seething anger and resentment. Volunteers selflessly plunge themselves into the fray to cleanse the human wreckage and ease the suffering. Many who respond to the call give their lives. To reassure its citizens, the stricken government spends billions fortifying common spaces, transportation systems, and airports. Congress quickly acts, approving millions more for future mass casualty incidents, from chemical and biological sources. State and federal officials soon cast their watchful eyes everywhere, searching for when the enemy might strike next. A once mighty nation bolts itself inside, sinks into despair, and reconsiders its place in the world.

The images from that time are still fresh. From a wounded Pentagon, the gray smoke curls. Investigators pour over the remains of United 93 strewn across a field in rural Pennsylvania. The drums of war on September 11, 2001 were beating, but hope sprang forth. America would fight and survive. In a show of bipartisanship rarely seen these days, weary but unbowed legislators joined hands in solidarity on Capitol Hill, singing “God Bless America.” Atop the twisted girders of New York City’s Twin Towers, President George W. Bush channeled the country’s frustration through a bullhorn, flanked by New York’s Bravest. “I can hear you,” he shouted into a crowd. “The rest of the world hears you. And the people that knocked these buildings down will hear all of us soon!” This was the story of that sunny Tuesday morning—the day America, the sole superpower, was laid low.

Presidents have faced uncontrollable catastrophes in the past, but all of them have reacted similarly. To end inequality and to bring about a Great Society, Lyndon Johnson declared war on poverty. Richard Nixon declared war on cancer to stop sickness and death. Ronald Reagan declared war on drugs to end the scourge of addiction. And in the hope that Al Qaeda and Islamists everywhere never strike America again, George W. Bush declared global war on terrorism.

Now, not to be outdone, President Donald Trump declared war on March 18, 2020 on an “invisible enemy”—COVID-19, the novel coronavirus; a deadly, highly contagious form of the Severe Acute Respiratory Syndrome from Wuhan, China.

War metaphors galvanize an aggrieved society against enemies seen and unseen. Now a self-described wartime president, Trump used his words to convey strength and impart a sense of terrible urgency about the coronavirus pandemic. They reflect the president’s proclivity to throw up the barricades when something foreign or offensive approaches. His words also convey that danger continues to lurk about, so big changes are on the way. The road to this point, however, has been a tortuous one, paved with many denials and diversions along the way.

HIGH-LEVEL dispatches to the president gathered steam with a November 2019 National Center for Medical Intelligence (NCMI) report that detailed the contagion’s spread through Wuhan. The NCMI briefed its leaders at the Defense Intelligence Agency, the Joint Staff, and the White House National Security Council (NSC) a month later. The administration had ample intelligence on the Wuhan situation, and it knew China was covering up the infection’s full scale. By January and February, the system was blinking red. The Intelligence Community presented more than a dozen coronavirus warnings in the President’s Daily Brief—the same publication in which CIA analysts foretold Osama bin Laden’s determination to strike the United States in August 2001.

The NSC acted on the NCMI’s intelligence. It recommended to Trump that Americans should stay home from work and dense metropolises where viruses thrive ought to close. The Centers for Disease Control (CDC) alerted the public on January 17. It was monitoring international airports in Los Angeles, San Francisco, and New York, where large numbers of travelers fly in from China. Secretary of Health and Human Services (HHS) Alex Azar, who led the department in the 9/11 aftermath, hurriedly raised warning flags twice that month. Despite assurances his experts were working to contain the problem, the president brushed Azar off, saying he was being “alarmist.” Almost a week later, a Seattle man who had recently traveled to Wuhan was the first known U.S. citizen diagnosed with coronavirus. The most definite sign something was amiss came on January 23. In a struggle to contain COVID-19’s spread, President Xi Jinping shut down Hubei Province, an area the size of North Dakota surrounding the city of Wuhan, two days before Chinese New Year. Beijing’s bustling city life in early February slowed to an eerie crawl after authorities suspended all modes of mass transit.

None of this registered with Trump. His focus was elsewhere. During this critical period, the president was in Davos, Switzerland, for the World Economic Forum. The U.S. Senate was just weeks away from acquitting him of abuse of power and obstruction of Congress, and trade negotiations with China were ongoing. Embarrassing Xi with talk of an uncontrollable virus would have been counterproductive. Trump, noticeably, pinned his hopes for reelection on a booming economy. Acknowledging the possibility of a pandemic could potentially spark a downturn that could render millions jobless. A CNBC reporter asked the president if he was concerned about a pandemic. He replied: “No. Not at all. And we have it totally under control. It’s one person coming from China … it’s going to be just fine.”

On January 31, Secretary Azar imposed the president’s preemptive ban on all foreigners who traveled to China over the past two weeks. By then, stockpiles of protective masks and equipment were already depleted. Functioning CDC testing kits and ventilators were also in dangerously short supply by the end of February. Trump has since touted this travel ban on China as a decisive move against the coronavirus. While it is true that the ban may have bought America some critical time to prepare for the oncoming storm, this time was not used wisely. Moreover, Trump had ample warning before that point to build stockpiles of tests and protective equipment. Almost one year earlier, former Director of National Intelligence (DNI) Dan Coats’ Annual Threat Assessment foretold the United States’ vulnerability to a pandemic could lead to “massive rates of death and disability.” The former DNI’s words were prescient in hindsight. Other forecasts in the forty-two-page document—specifically, those about Russia’s determination to meddle in the 2020 election—enraged Trump as the impeachment inquiry lengthened into a trial. After delivering his report to the Senate Intelligence Committee—headed by Senator Richard Burr—Coats resigned on July 28, 2019. It is worth noting that, since then, Burr, who was privy to sensitive coronavirus briefings prior to the virus’ arrival in the United States, did not warn the public to prepare for the possible consequences of the pandemic. Instead, there is evidence that he acted on this information and sold over $1 million in stocks before the market crashed in March. He has since stepped down as chairman of the Senate Intelligence Committee and is under investigation by the Department of Justice for insider training.

With the ban in place, Trump dawdled until mid-March. Then, at last, a seeming breakthrough. To answer the states’ pleas for coronavirus tests, the president, during a Rose Garden news conference, announced a partnership between Google and big-box retailers such as Walmart and Target. A website, developed by 1,700 engineers, would determine if patients required testing, and direct them to testing sites set up in parking lots all over the country. The dramatic announcement caught Google executives entirely by surprise. Verily, a Google subsidiary, was developing a drive-through testing unit, but only for a handful of counties in California. The president’s son-in-law, Jared Kushner, operating separately from the vice president’s Coronavirus Task Force, was working on a similar application through a family-owned health care company. Neither endeavor was ready for nationwide deployment.

TRUMP FINALLY declared his war, though the facts overtook his aspirations, and the time for preparation had run out. With more than a hundred deaths and 13,000 reported cases on March 19, the contagion was spreading inexorably into homes and hospitals in New York, Los Angeles, and Chicago. And yet, against the expert medical advice of Dr. Anthony Fauci, head of the National Institute of Allergy and Infectious Diseases, and Dr. Deborah Birx, the U.S. Global AIDs Coordinator—both with decades of experience in the spread of fatal illnesses and HIV-AIDs—the president said the coronavirus would disappear like “a miracle” and the nation would be back to normal by Easter.

In the ensuing days, Trump played master of ceremonies for a coterie of businessmen, singing their praises. He doubled as his own press secretary. Sometimes he was an amateur clinician, touting the dubious curative properties of anti-malarial drugs. There had been so much misinformation coming from the president that major networks and cable news outlets considered cutting their coverage short, even though Trump, citing a New York Times report over Twitter, claimed his ratings have been better than Monday Night Football and The Bachelor season finale.