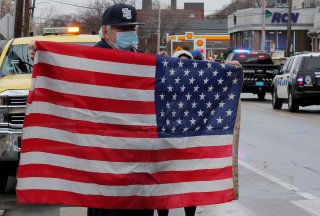 In responding to the COVID-19 crisis, the United States is operating with decentralized institutions naturally ill-suited for strategy-making, a preexisting condition that dates to the country’s founding. We will suffer for that in the short run. But in meeting this deadly threat, even a suboptimal approach will prove better than an authoritarian power grab that permanently alters our society.

While democracy has flourished in many parts of the world, the United States engages in strategic planning and operations differently from other countries. The American hybrid approach relies upon state and local actors as well as the private sector and citizens, as it does on the federal government. As Alexis de Tocqueville noted of the United States long ago, “a democracy can only with great difficulty regulate the details of an important undertaking….”. Our revolutionary origins have always yielded contradictory impulses that resist concentration. We do not support wars for a person, be that a King or a President.  We do not envision an abstract country-wide “community,” though local communities are essential. When Americans talk of "country," they mean the people of the country—their families, their prosperity, their dreams, their way of life.

In the absence of a palpable threat to those people, the U.S. has never made an effective long-term strategy. Fighting Communism in Vietnam, seeking nation-building in Afghanistan, bringing democracy to Iraq (or the broader Middle East)—the United States failed to win these contests because our system is not structured to support them. Thus far, the American strategy of twenty-first-century endless wars boils down to “don’t lose.”  To win, the American people must grasp and unite against a clear and present danger--to them.

Unfortunately, we have that now: COVID-19 is absolutely a threat to the American people. It poses a catastrophic health risk, economic devastation, and if we are not careful, permanent damage to our American democracy. We need to fashion an effective strategy with precise short- and long-term objectives, supported by a sustainable and resilient crisis-management system. To do that, we must rely on the proven foundations of American democratic institutions, sharing power and informed by specific lessons from around the world.

The search for solutions begins in East Asia, where several governments have found effective ways to battle the novel coronavirus. Mining the experience of South Korea, Taiwan, Singapore, and China for best (and worst) practices and lessons learned can inform America’s strategy for limiting the damage of COVID-19 now, and for preparing for the next pandemic, too.

Asian models of success share several attributes that may or may not be transferable to the United States. First, each had already invested heavily in public health systems. Second, also before the outbreak of this virus, each government had constructed the medical, technological, and legal structures essential to mobilizing quickly against an epidemic. Third, each created or imposed a societal sense of vigilance and citizen responsibility. The transparency and trust earned in Taiwan, South Korea, and Singapore offer far better teaching points for America than does the belatedly successful Chinese model that relies on an ever-growing surveillance state and the suppression of information.

The real challenge for the United States will be to determine which elements of the Asian democratic models can apply to our system. Even the relatively successful democratic models suggest some solutions that could set in motion authoritarian structures and laws.

In late January, Taiwan appeared destined to suffer from COVID-19 in numbers commensurate with Mainland China.  With some 150 cross-strait flights a day and about 44 percent of Taiwan’s population of 23.8 million people living in three cities, Taiwan should, by early April, have suffered far more than the 385 confirmed cases and six deaths.  The number of infections in Taiwan is considerably lower than even the undercounted official Chinese number of confirmed cases in 11 PRC provinces as well as Beijing, Shanghai, Chongqing, and Hong Kong.

The key to Taiwan’s success was foresight.  Having been deprived of international space by Beijing, and burned by the 2003 SARS epidemic, the Taipei government realized it would need to take matters into its own hands in pandemics.  Public health became a core competence and a universal right, and it paid off.  On December 31st, Taiwan's Centers for Disease Control warned of possible human-to-human transmission from atypical pneumonia spotted in China and began screening passengers on all flights from Wuhan. Starting on January 21st, with the first confirmed case of the coronavirus in Taiwan, an emergency response center was opened, many flights halted, and strict border procedures enacted. A comprehensive tracking and monitoring regime located the contagion. The collection of travel and contact histories supported active tracing and helped with multiple levels of self-isolation and quarantine. Scofflaws were shamed and fined. A health minister commanded a whole-of-government operation and provided daily expert, transparent public briefings.

For Singapore, sometimes dubbed the Switzerland of Asia, the commitment to public health, education, high-technology, and civic duty was even more ingrained in the city-state's DNA than in Taiwan.  Here, Singapore reflected the legendary post-independence leadership of founder Lee Kwan Yew, as well as the need for survival as an East-West hinge point and vital trading port. In early April, when confirmed cases surpassed 2,100 with seven deaths and Singapore announced its version of a stay-at-home order, all students transitioned immediately to online learning for what officials called a ‘circuit breaker’ on transmission.

But there were tradeoffs. Singapore’s 5.6 million people enjoy marvelous access to information, but that also comes at a price to personal privacy, in the information age more than ever. Singapore leveraged Big Data for containing COVID-19 to an unprecedented degree: one could scan free web-based infographics to identify the number of infected people, date when contagion was confirmed, and precise building location of each case within Singapore. Illiberal democracy works well there, but Singapore’s prescription for fighting the virus would never work in the United States, a much larger country where power is diffuse, privacy is cherished, and fear of Big Data rivals fear of disease.

South Korea, a middle power country with more than 51 million people and the world’s 11th largest economy, offers a successful example on a larger scale than either Taiwan or Singapore. After the 2015 MERS outbreak, in which South Korea suffered from the worst epidemic outside of the Middle East, Seoul ratcheted up its health industry and medical institutions to a national gold standard for testing infectious disease. The government approved its first COVID test kit on February 4th, when South Korea had only 16 confirmed cases. It also cast aside concerns about civil liberties to tap into smartphone and other data for aggressive contact tracing.

This system permitted the swift containment of the primary outbreak from a church in the country’s third-largest city, Daegu, without completely closing down greater Seoul, home to roughly half of the country’s population. The Big Data-led Korean model, which includes mandatory tracking wristbands to enforce quarantine, is known by the acronym TRUST: Transparency, Robust screening and quarantine, Unique but universally applicable testing, Strict control, and Treatment.

All three East Asian democracies flattened the curve, albeit with some measures incongruent with American values.  Meanwhile, China also did so, albeit after a costly delay and a high and probably undercounted rate of infection and death (officially, about 83,000 and 3,343, as of early April, with the vast majority of deaths in the greater Wuhan area of Hubei Province).  China's early-warning model faltered in part due to local government fear of reporting bad news to Beijing.  But once China’s national system took charge, the draconian enforcement of social distancing, quarantining, and mass treatment exceeded anything seen in democracies.  After almost 11 weeks on lockdown, residents in the epicenter started a wary resumption of their previous daily lives, albeit on high alert for a second wave of infections.

So, how can U.S. strategy incorporate the most salient lessons from others’ experience, without jeopardizing core American values? At the federal level, the U.S. approach must involve both the legislative and executive branches, and not rely upon power-concentrating Presidential executive orders that have been the fallback in far too many crises during the past few decades.

The first thing is to make a robust investment in the country’s public health system, a crucial part of our national infrastructure that has suffered years of neglect. All three successful democratic models had strong systems in place well before the COVID-19 crisis occurred.

Second, we must build a legal framework to enable short-term monitoring of individuals when there is a deadly national pandemic threat, with contact-tracing by both human health workers and electronic means.  The law must be carefully structured to protect the data collected, limit its use, and automatically erase it when a crisis ends. That will require passing carefully crafted legislation with strong built-in restraints and limitations.

Finally, we need greater national self-sufficiency. Congress must mandate the adequate maintenance of the strategic national stockpile of medical supplies. America’s bottom-up approach, where states and cities take charge locally, can supplement but not replace federal leadership in a national crisis.  Yet Washington failed to invest sufficiently. And in late January, when China realized the severity of the pandemic, it went on a global shopping spree for personal protection equipment that ensured shortfalls everywhere else as the outbreak spread. Ending U.S. overreliance on China for essential medical equipment and medicines is imperative.  Medicine and public health must be a national security priority.