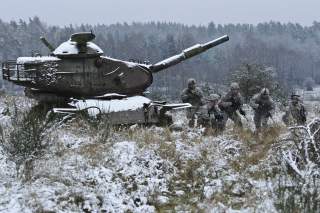 DONALD TRUMP won the election after a tough and divisive campaign. While running for president, he did not shy away from questioning some accepted precepts of recent U.S. foreign policy or from making a number of flamboyant policy pronouncements. Consequently, the “morning after” was replete with speculation—and not inconsiderable trepidation in some quarters—about the sort of leadership the world could expect from the forty-fifth American commander in chief. Predictions have covered the gamut. Friends and foes alike are anxiously waiting to see what the new president will do in office, studying what he has said, and preparing their own options and possible responses.

Trump has the opportunity to “think big,” as he writes in his book The Art of the Deal and elsewhere, and recast American and Republican foreign policy for decades to come. As he does that, he will be constrained by the world as he finds it and by America’s domestic circumstances. Given these limitations, and the core beliefs he explicated during the campaign, a prudent foreign policy is possible and can find bipartisan support. The opportunity is there. I hope he seizes it.

THERE’S NO sugarcoating it: the world is in the most dangerous period since the end of the Cold War. What’s more, the very structures of the post–World War II international order are in question.

There is growing global chaos, across multiple regions. Crises and threats from even remote places today can have international impact. Major powers, first and foremost Russia and China, are challenging the current rules of the game to advance their agendas and visions. As a result, for the first time in decades, there is a real risk of war among the major powers.

Russia is taking advantage of power vacuums created by U.S. retrenchment and using modernized elements of its military power to hammer home the message that the United States and the West cannot solve world problems without Moscow’s assistance. That posture reflects Russia’s deep-seated resentment against the West based on the belief that since the end of the Cold War it has been slighted, its interests ignored, and that it has not been given the international stature and respect it covets.

China, meanwhile, is a power clearly on the rise, self-confident and convinced that time is on its side. The country’s dramatically increased economic and military power is permitting leaders in Beijing to pursue an ambitious vision, which they believe they are entitled to because of China’s size, huge population and five-thousand-year history, including long periods of preeminence. Against a backdrop of cultural and historic differences in which China classically did not regard other nations as equal, Beijing seems intent on working toward a Chinese-led international order, a vision that is quite different from the liberal international order created by the West after World War II. These are the motivations behind the maritime territorial grabs in the South China Sea and the efforts for increased influence in Central Asia, the Middle East and Southeast Asia. U.S.-China relations are a key factor in shaping the future of the international order. This relationship has the potential for conflict, because as history indicates, rising powers and status-quo powers often come into military conflict.

Significant changes are underway in several regions. Asia is becoming a rising center in the global economy, due not just to major economic powers such as China, Japan South Korea, India and Indonesia. The future of Europe, America’s most important partner for so many decades, has become uncertain as it grapples with a trifold crisis: the threat from Russia; the pressure of massive population movements from Africa and the Middle East, with all the ensuing domestic political stressors strengthening support for nationalism and opposition to multiculturalism and globalism; and the widely perceived internal flaws of the European Union that led to Brexit.

Across a significant part of the broader Middle East, state structures have been weakening and even collapsing. There are several contributing factors, including the failure of governments and the current state system to meet the needs of their peoples, and because of Iran’s disruptive policies to strengthen its influence by supporting substate actors. A visible consequence is retribalization, the resurgence of alternative identities—sects, ethnicities and tribes. The national borders devised by Western powers for Iraq and Syria, in particular, are not standing up well to the test of time. These factors, and the absence of national compacts among the major communities of key states, have led to internal instability and civil wars and have fostered conditions for the rise of extremist parties and terrorist groups.

Syria, Iraq and Afghanistan are experiencing various mixtures of civil wars, terrorism and extremism, further fueled by regional-power interference. Among these, the threat of terrorism is the most important. Iran is supporting extremist political groups and fielding militias in Iraq, Syria, Yemen and beyond in order to pursue regional hegemony—to which it believes itself entitled because of its size, population, culture and history. Iran’s policies are undermining the state system in the region. As it did after the overthrow of Saddam Hussein, Tehran is now also using the rollback of ISIS to expand its influence in Iraq and Syria. Rival powers such as Turkey and Saudi Arabia, which see Iranian actions as the principal threat to the region, are supporting groups opposed to Tehran. Their relations with the United States suffered during the Obama administration because Washington downplayed the Iranian threat.

Pakistan’s support for insurgents and terrorists in Afghanistan is an enduring problem. The effort to use assistance as leverage to encourage Islamabad to abandon support for terrorists and Taliban insurgents has not been successful, and Pakistan’s policies have contributed to Afghanistan’s precarious condition and increased Taliban attacks. The consequent disorder has also enabled an increase in ISIS and Al Qaeda’s presence there.

Technological diffusion compounds these threats. Nuclear weapons and ballistic-missile technologies are proliferating. Hostile powers have developed cyber capabilities that can threaten the critical infrastructure of the United States and other developed countries. States, groups and individuals have used cyber attacks and hacking to meddle in the domestic affairs of states, including the United States. Communication technologies and social media enable political groups to mobilize in real time and allow transnational terrorist networks to operate at little cost, to recruit adherents worldwide and to do so in secrecy.

Some retrenchment was to be expected after the George W. Bush era, which had seen almost eight years of war, two regime-change operations and two large simultaneous nation-building projects. Arguably, though, some of President Obama’s policies overcompensated, creating power vacuums that were soon filled by hostile powers and negative forces. Obama believed that in the twenty-first century, unlike earlier times, it was less than optimal to use military power to achieve geopolitical goals. He therefore sought to disengage from key regions. He made a great effort to engage adversaries, such as Russia, China and Iran, hoping that reasonable compromises could be found and that diplomacy alone could be a sufficient tool. The results have been mixed. In Syria, for example, his decision to draw, but ultimately not enforce, a “red line” reverberated around the world and undermined U.S. credibility. Too often, his emphasis on diplomacy alone was read as a weakness by revisionist powers, and they felt encouraged to press forward with aggressive agendas.

MEANWHILE, INTERNAL discord within the country over foreign policy has clearly increased. The record of the very expensive and protracted conflicts undermined the confidence of the public. Growing economic problems and demographic changes have encouraged a focus on domestic issues. The end of the bipolar world and the complexity of current global challenges have made agreement on priorities and strategies more difficult. Though bitter partisan fights also marked the George W. Bush and Obama administrations, the divisions deepened further over the course of the presidential campaign.

The differences between the major candidates were stark. While Donald Trump called for “America First” policies, Hillary Clinton supported a globalist agenda involving costly policies that, at times, seemed only loosely linked to American interests. Clinton supported traditional U.S. alliances without question, but Trump felt they should be subjected to rigorous tests of relevance to the current challenges and burden sharing. Clinton denounced Vladimir Putin as an aggressive authoritarian leader, while Trump appeared sympathetic to the notion of seeking areas of cooperation and sensitivity to legitimate Russian interests. Trump advocated more military spending to bolster deterrence, but Clinton was silent on whether her ambitions required larger defense budgets. Clinton sought to downplay the ideological component of the terrorist threat, refusing to relate it to radical Islamism, while Trump highlighted the ideology of terrorists and advocated strict vetting systems for visas and for immigration from countries where terrorists operated. Clinton, historically a supporter of NAFTA and the TPP, hedged on those positions in the campaign, but Trump saw those trade deals as undermining U.S. prosperity.

Of course, these differences between the candidates reflected divisions inside the country over issues of foreign policy. One side argues for retrenchment. It contends that countries need to solve their own problems and that Americans gain little and risk much from entanglement abroad. This group includes many supporters of President Obama as well as Republican budget hawks and isolationists. Another school of thought calls for a restoration of American primacy. It argues that Americans, as well as others, depend on the stability and prosperity made possible by U.S. global power and activism. These advocates include the so-called neoconservatives in the Republican Party and many globalists among the Democrats.