America Needs to Break its Old Habits on Russia 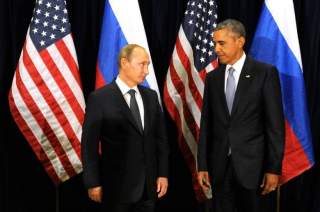 The United States needs a new grand strategy for Russia. As the Ukraine crisis continues, there should be no doubt that the goal that had animated policy since the end of the Cold War—the slow but steady integration of Russia into the Euro-Atlantic community—is beyond reach. Russia is no longer interested, if it ever was. Its ambition is to fortify itself as an independent great power based in central Eurasia. It is sharpening its challenge to the U.S.-led world order.

American strategy was not without its successes. It enhanced Euro-Atlantic security and prosperity, at least until the George W. Bush administration overreached in pressing to bring Georgia and Ukraine into NATO. But the strategy was tragically flawed. Integration entailed Russia’s transformation into a free-market, democratic nation-state, which we never had the power to effect, try as we might. That depended on the choices of the Russians themselves. In retrospect, we erred fundamentally in putting the success of our grand strategy in the hands of another country with interests not congruent with ours and leaders determined to run it as they saw fit.

To formulate a new grand strategy, we need to see Russia clearly. Today, our debate is dominated by extremes, by those who see Russia as the top geopolitical threat and those who simply believe it does not matter much any longer. Each position ignores a basic truth.

To begin with, Russia does matter, as would any country with one of the world’s largest nuclear arsenals, a world-class scientific community to develop the military applications of advanced technologies, the world’s richest endowment of natural resources and a location abutting regions of undisputed strategic importance for the United States: Europe, the Middle East and East Asia. Moreover, even in reduced circumstances, Russia retains the habits and mindset of a global power. It has a first-class diplomatic corps, an increasingly capable military and the will to use both. It will remain a key element of the emerging world order for years to come.

At the same time, Russia faces formidable challenges that will limit the dimensions of any possible threat to the United States.

Geopolitically, for the first time in the modern age, it is surrounded by regions that are more dynamic than it is. To the east is China, to the west Europe—in disarray now, but with potential power that dwarfs Russia’s—and to the south a region overflowing with primal energy. Beyond Eurasia lies the United States, the preeminent world power by any measure.

This geopolitical predicament sets the contours of Russia’s own grand strategy. It seeks to reassert its primacy in the former Soviet space, its historical sphere of influence and the foundation of its geopolitical heft. It hopes to use China to counterbalance the United States strategically and the European Union commercially. It exploits the fissures in Europe to prevent the consolidation of a potential superpower. And it aspires to compel the United States to act like a normal great power, that is, one that, to advance its interests, must take into account those of other great powers, including first of all Russia.

Whether Russia can succeed in all these tasks is an open question. At the moment, it appears hard-pressed to maintain its position in the former Soviet space against encroachments from the West and China, let alone reliably extend its influence into other regions. One thing is certain, however: to succeed, Russia must restore its historical dynamism. Whether it can is another open question.

Today, the Russian state may retain the ability to mobilize the resources of society for its own purposes, including modernizing the military, but the structure of power impedes the unleashing of the country’s creative energies to generate the resources the state needs to pursue its great-power ambitions over the long term. Reforming that structure is, however, fraught with disaster in the minds of an elite with vivid memories of Gorbachev’s perestroika, which led, as Putin once said, to one of the greatest geopolitical catastrophes of the twentieth century, the collapse of the Soviet Union.

Together, the geopolitical puzzle and the domestic conundrum feed a sense of vulnerability. We see the signs in the steps the Kremlin is taking at a time of economic crisis—the creation of national guard subordinate directly and solely to Putin, the growing pressure an autonomous political actors—to preempt a repeat during the Duma elections this September of the unnerving unrest that erupted after the last ones in 2011. We see the signs in the repeated reminders that Russia is a nuclear power and the provocative strategic reconnaissance missions in Europe. The sense of vulnerability is only deepened by the possibility that Russia has entered a prolonged period of stagnation. Arguably, Russia is acting more assertively now because this may be its moment of maximal power vis-à-vis the United States and China, and thus the time to force the question of world order and secure Russia’s place as a great power in the twenty-first century.

What then should be the guiding principles for the next administration’s Russia policy?

The starting point is accepting that we have moved into a new era. There is no need for a reset or the pursuit of strategic partnership or the restoration of business as usual. Nor should we return to the harsh adversarial relationship of the Cold War, with a focus on containment. Rather, we should approach Russia based on a hard calculation of national interests and an unsentimental, nonideological assessment of how Russia might help us advance or thwart our goals. We should focus more on its external behavior and less on its internal politics. The relationship that will emerge will be a mix of competition and cooperation, of resistance and accommodation—in short, a normal relationship between major world powers.

In this broad framework, we should shape policy to reflect the differing roles Russia plays from the standpoint of American national interests, from region to region and issue to issue.

In Europe, for example, Russia has challenged our interests by violating the accepted norms of interstate relations and working to erode Europe’s unity. We need to resist. In East Asia, by contrast, Russia could be a partner in forging a flexible balance of power to channel China’s rise in ways that do not undermine core American interests. In the Middle East, with its recent actions in Syria and active diplomacy, Russia has forced its way to the table of the region’s geopolitical reckoning. Here Russia will be at times a partner, at times a rival as we try to resolve the Syrian crisis and, more importantly, forge an enduring equilibrium among the key regional powers. Meanwhile, despite dire warnings of a coming geopolitical confrontation, the Arctic can continue to be a zone of cooperation in safeguarding a fragile ecosystem and exploiting abundant commercial opportunities.

On transnational issues, such as nonproliferation, international terrorism, energy security, climate change and pandemic diseases, there is much potential for cooperation, as long as we avoid exaggerating the extent to which our interests are shared. As recent experience in Syria has demonstrated, the United States and Russia understand the threat of terrorism in different ways, propose differing ways to counter it and accord it different ranks in their national priorities. On all other transnational issues, we encounter analogous divergences in interpretation, response and priority.

A major challenge will be crafting a coherent policy out of the various approaches to Russia on discrete issues. How do we structure Ukraine sanctions so as not to drive a weakened Russia into China’s arms in East and Central Asia? Are there ways we can engage Russia in the Middle East that do not jeopardize our interests there while helping to defuse tensions in Europe? As much as we might want to compartmentalize issues, we cannot, because for Russians everything is linked and trust is not divisible, and because a vast disparity in power tempts Russians to seek asymmetrical and unorthodox responses to the challenges they believe we pose to them. In these circumstances, Russia policy needs to be overseen by a senior official close to the president who can break down the bureaucratic stovepipes and integrate the various policy components of into a coherent whole.

The next administration will have its work cut out for it as it crafts a policy that needs to break with the grand strategy of the post–Cold War period and forge a new one. Effective policy will require complicated trade-offs within and across issues in a global context that is increasingly fluid. We will have to make tough choices. But it should not be beyond our capacity to formulate and execute such a nuanced policy. Moreover, that is the only path to a Russia policy that reliably advances America’s interests now and well into the future.

Thomas Graham, managing director at Kissinger Associates, was the senior director for Russian on the National Security Council staff 2004–07.