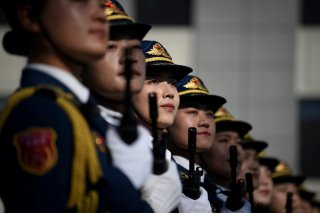 So should government-to-government relations. During the détente phase of the Soviet Cold War, the United States and the Soviet Union signed several agreements to prevent accidental military clashes, on arms control following Strategic Arms Limitation Talks, to promote cooperative research, and to expand trade. Agreement on mutually beneficial matters is worth seeking even with one’s adversaries to lessen the chances of accidental conflict.

While we might hope that one day the Chinese people will be free of their Communist overlords, regime change should not be our goal—whether the CCP survives or vanishes is up to the Chinese people. Our concern should be the policies that make Beijing a threat to our national security and world peace.

The Final Outcome and Intermediate Risks

We won the Cold War with the USSR, and we should be able to win this one as well… and in much the same way. Communist China will fail in its global ambitions after it first fails at home because communism is a failed ideology. The Soviet Union collapsed because the regime did not meet its peoples’ aspirations of political freedom and economic prosperity.

The Chinese people have an unspoken deal with their rulers: As long as the economy grows and the standard of living increases, the people accept its lack of political freedoms. China first introduced elements of capitalism in 1978 and its GDP growth has averaged almost 10 percent a year since then. Under Xi Jinping, however, it has been reversing many of its capitalist reforms. For this reason and others, China is projected to grow at 5 percent this decade and slower after that.

This slower growth will exacerbate China’s simmering internal problems. U.S. GDP per capita is about $65,000; China’s is about $10,000. And the regional disparities are vast: GDP per capita is over $20,000 in Beijing and Shanghai but under $8,000 in Tibet and Xinjiang, and under $6,500 in northeastern China.

What is growing, though, is the brutality and reach of China’s techno-dictatorship. The Chinese people’s desire for freedom did not end as the tanks rolled into Tiananmen Square. As tensions within China grow, a restive population can be expected to once again demand change.

Internationally, China has border conflicts with almost all its neighbors and tense relations with some more distant neighbors like Australia. Its limited soft power appeal has been further reduced by its lack of transparency on the Covid-19 pandemic, snuffing out Hong Kong’s freedoms, and the genocide of Uighurs.

All this will make for a dangerous decade. Dictatorships sensing problems at home often resort to a messianic nationalism to rally support. This makes a Chinese assault on Taiwan or renewed conflict with its neighbors a possibility that cannot be discounted.

The United States did not seek this existential conflict and cannot avoid it. To win this multi-decade contest, the United States must organize a whole-of-society effort at home and also lead the Free World. The first step is to recognize that it is a “Cold War.” And to call it that.

David Keene is a member of the Board of Directors of the Center of National Interest and was chairman of the American Conservative Union for twenty-eight years.

Dan Negrea, a Senior Fellow at the Atlantic Council, held leadership positions at the Department of State and was a Wall Street executive. He defected from Communist Romania.