America Needs an "Engage and Contain" Strategy for China 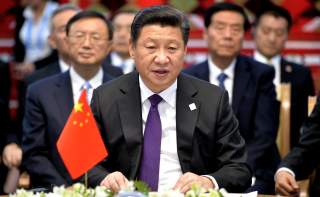 For the United States, the headline concerning China should not be “engage and hedge” as it has been for decades. Given China’s systematic destabilizing external behavior, the time is past for hedging. Rather, for the foreseeable future, U.S. policy should be “engage and contain.”

With President Trump’s first meeting with President Xi Jinping of China scheduled for next month in Palm Beach, Florida, President Obama’s ambassador to China, Max Baucus, a longtime Montana Democrat senator, recently said that the United States needs to stop getting pushed around by China and work out a long-term strategy to deal with that country’s rise. Baucus expressed frustration with the Obama administration’s lack of strategic vision and its weakness when it came to China. China, Baucus said, has a long-term objective to build up its economic might and global influence at the expense of the United States. The United States, by contrast, often appears distracted by problems in the Middle East.

“The Washington foreign-policy establishment tends to put China on another shelf, to deal with it later,” he said. “We’re much too ad hoc. We don’t seem to have a long-term strategy, and that’s very much to our disadvantage.”

China, therefore, does not see its interests served by becoming just another “trading state,” no matter how constructive an outcome that might be for resolving the larger tensions between its economic and geopolitical strategies. Instead, China will continue along the path to becoming a conventional great power with the full panoply of political, geoeconomic and military capabilities, all oriented toward realizing the goal of recovering from the United States the primacy it once enjoyed in Asia as a prelude to exerting global influence in the future.

Because the American effort to “integrate” China into the liberal international order has now generated new threats to the United States’ vital national interests in Asia—and could eventually result in a consequential challenge to American power globally—Washington, DC needs a new grand strategy toward China that centers on containing the rise of Chinese power rather than continuing to assist its ascendancy. It must involve crucial changes to the current policy in order to limit the dangers that China’s disruptive diplomacy, geoeconomic coercion and military expansion pose to U.S. national interests in Asia and globally.

These changes, which constitute the heart of an alternative containment strategy, must derive from the clear recognition that preserving U.S. power and influence in the global system ought to remain the central objective of U.S. grand strategy in the twenty-first century. Sustaining this status in the face of rising Chinese power requires, among other things, revitalizing the U.S. economy to nurture those disruptive innovations that bestow on the United States asymmetric economic advantages over others; substantially increasing the defense budget and consequently shifting U.S. defense resources to Asia; creating new preferential trading arrangements among U.S. allies and friends to increase their mutual gains through instruments that consciously exclude China; recreating a technology-control regime involving U.S. allies that prevents China from acquiring military and strategic capabilities enabling it to inflict “high-leverage strategic harm” on the United States and its partners; concertedly building up the power-political capacities of U.S. allies and friends on China’s periphery; and improving the capability of U.S. military forces and allies to effectively project power along the Asian rimlands despite any Chinese opposition—all while continuing to work with China in the diverse ways that befit its importance to U.S. national interests.

The necessity for such a containment strategy that deliberately incorporates elements that limit China’s capacity to misuse its growing power, even as the United States and its allies continue to interact with China diplomatically and economically, is driven by the likelihood that a long-term strategic rivalry between Beijing and Washington is high. Of all nations—and in most conceivable scenarios—China represents, and will remain, the most significant competitor to the United States for decades to come. China’s rise thus far has already bred geopolitical, military, geoeconomic and ideological challenges to U.S. power, U.S. allies and the U.S.-dominated international order. Its continued, even if uneven, success in the future would further undermine the vital national interests of the United States. Washington’s current approach toward Beijing, one that values China’s economic and political integration in the liberal international order at the expense of the United States’ global preeminence and long-term strategic interests, hardly amounts to a “grand” strategy, much less an effective one. As such, the need for a more coherent U.S. response to increasing Chinese power is long overdue.

This is an urgent requirement because there is no real prospect of building fundamental trust, a peaceful coexistence and mutual understanding, a strategic partnership or a new type of major country relations between the United States and China. Rather, the most that can be hoped for is caution and restrained predictability by the two sides as intense U.S.-China strategic competition becomes the new normal, and even that will be no easy task to achieve in the period ahead. The purpose of U.S. diplomacy in these dangerous circumstances is to mitigate and manage the severe inherent tensions between these two conflicting strategic paradigms, but it cannot hope to eliminate them.

With this in mind, the U.S.-China discourse should be more candid, high level and private than current practice—no rows of officials principally trading sermons across the table in Washington or Beijing. Bureaucracies wish to do today what they did yesterday, and wish to do tomorrow what they did today. It is, therefore, inevitable that representatives from Washington and Beijing routinely mount bills of indictment regarding the other side. All are familiar with these calcified and endlessly repeated talking points. As the Chinese proverb puts it, “to talk much and arrive nowhere is the same as climbing a tree to catch a fish.”

For such an intensified high-level bilateral dialogue between Washington and Beijing to be fruitful, it should avoid concentrating primarily on the alleged perfidious behavior of the other side. For instance, no amount of American condemnation of China’s human-rights practices—private or by megaphone—will consequentially affect Beijing’s policies, including toward Hong Kong; and no degree of Chinese complaints will lead the United States to weaken its alliance systems that are indispensable to the protection of its vital national interests. Nor is it likely that either side will admit to its actual grand strategy toward the other. In any case, endemic contention will over time contribute to a systemic worsening of U.S.-China bilateral relations.

The profound test that the rise of Chinese power represents for the United States is likely to last for decades. And it is unrealistic to imagine that China’s grand strategy toward the United States will evolve in a way—at least in the next ten years—that accepts American power and influence as linchpins of Asian peace and security, rather than seeking to systematically diminish them. Thus, the central question concerning the future of Asia is whether the United States will have the political will; the geoeconomic, military and diplomatic capabilities; the indispensably close ties with treaty allies; and, crucially, the right grand strategy to deal with China to protect vital U.S. national interests.

Unfortunately, the Trump administration has gotten off to a counterproductive start in this regard. Putting aside the President’s earlier unfortunate dismissal of U.S. alliances in Asia and Europe, his telephone call with the Taiwan president and his questioning of the “One China” policy, the administration’s withdrawal from the Trans-Pacific Partnership is a serious blow to American power projection in Asia and a gift to China’s hegemonic designs in the region. One can only hope that Pence, Mattis, Tillerson, Kelly, Pompeo and McMaster, all distinguished and all of whom hold conservative realist views of the world, will persuade the president to adopt a long-term containment strategy toward China before his April meeting with Xi Jinping. But that is by no means assured. As Puck observes in Shakespeare’s A Midsummer Night’s Dream, “Lord, what fools these mortals be!”

Robert D. Blackwill is Henry A. Kissinger senior fellow for U.S. Foreign Policy at the Council on Foreign Relations and Senior Fellow at Harvard’s Belfer Center for Science and International Affairs. He was deputy national security advisor for strategic planning and ambassador to India in the George W. Bush administration.