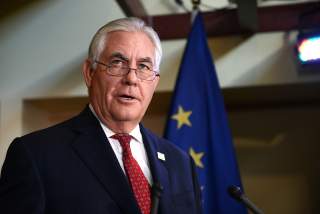 Rex Tillerson recently stated that “we should and do condition our policy engagements on people adopting certain actions as to how they treat people . . . but that doesn’t mean that’s the case in every situation.” He also said that pressing others to adopt American values “creates obstacles to our ability to advance our national-security interests [and] our economic interests.” Tillerson’s position should not be conflated with that of President Trump’s view, which is widely understood to be that promoting human rights overseas is not compatible with an America First position.

Tillerson’s statements led Senator John McCain to write a strong op-ed in the New York Times in which he stressed that human rights ought to be the core of U.S. foreign policy. McCain writes that Tillerson’s words amount to the following message: “Don’t look to the United States for hope. Our values make us sympathetic to your plight, and, when it’s convenient, we might officially express that sympathy. But we make policy to serve our interests, which are not related to our values.” Furthermore, he writes that “it is foolish to view realism and idealism as incompatible or to consider our power and wealth as encumbered by the demands of justice, morality and conscience.”

First of all, one notes that U.S. foreign policy, at least since World War II, was, and is, to work with authoritarian and even totalitarian regimes when this serves our core interests. Saudi Arabia is still beheading more people than ISIS. The United States supported the generals in South America despite the atrocities they committed, and did not hesitate to negotiate with North Korea and Iran. Often when the United States and Chinese delegations meet, the U.S. delegation reads its complaints about China’s abuse of human rights, while the Chinese wait for their turn to read some statement about the evils of capitalism. After completing this human-rights dance, both sides get down to business. One can argue whether it is a good idea to explicitly state the U.S. position or try to camouflage it. However, the way Tillerson put the Trump administration’s position on human rights breaks little new ground.

More importantly, Senator McCain’s compelling call to keep the promotion of human rights as a core element of U.S. foreign policy does not address the fact that this goal is noble but the means may be foul. There is a vast moral and prudential difference between promoting human rights with nonlethal means (such as public diplomacy, leadership training, cultural exchanges and even smart sanctions) and coercive regime change. Such changes often lead to very high human and economic costs. These could be considered as a price one must pay for liberty, but they often result in new, very unsavory governments.

Whatever reasons the United States had for invading Iraq, it stayed to make Iraq into a liberal democracy. The human costs for the Iraqis have been horrendous. At least twenty-five thousand people lost their lives and millions lost their homes. The Shia government supported militias acting as death squads against Sunnis, which has driven them to support ISIS. The military is so corrupt that often not enough funds are left for ammunition and food for the troops. In Libya, the humanitarian intervention morphed into a coercive regime change, leading to bloody civil war. The United States ignored that the rebels it considered pro-democratic forces committed many of the same atrocities that Muammar el-Qaddafi’s forces did, including ethnic cleansing. Afghanistan, after sixteen years of democracy building, is one of the most corrupt nations in the world; it is a major source of heroin that floods central Asia and streams into Europe. Terrorism is rampant. The United States has even been unable to stop the institutionalized pedophilia (called bacha bazi) of the governing Pashtun elites. One of the many reasons the tragic war in Syria is continuing is that for years, the United States insisted that Bashar al-Assad’s departure be a precondition for negotiation.

Coercive regime change also stands in the way of dealing with North Korea, China and Russia. Recent statements that the United States is out to change the regime in North Korea are sure to make the regime work even harder (if that is possible) to develop its nuclear arms and resist any negotiations. China and Russia feel that their allies are threatened as well as their own regimes.

In short, a strong case for the promotion of human rights needs to be coupled with a discussion on how it will be achieved. Avoiding coercive regime change and relying on nonlethal means seems a morally sound and wise foreign policy.

Amitai Etzioni is a University Professor and Professor of International Relations at The George Washington University. His book Avoiding War with China was recently published by The University of Virginia Press. For more discussion see “The Case for Decoupled Armed Interventions.”