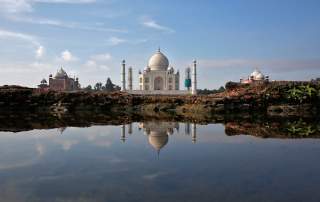 The post–World War II era marked the beginning of a new world order: Pax Americana. Since then, the United States has played a central role in global affairs by shaping the institutions and norms that regulate the international community. Human rights, democracy and free-market economics have been the core American values promoted. The United States and its allies faced a single, conventional enemy during the Cold War. After which, the United States intended to globalize that international order by integrating detractors, such as Russia and China, so they would not disrupt the system. The attacks of September 11, 2001, marked a dramatic shift from the 1990s global security for the international community, global governance, and global markets to the post–9/11 world in which non-state actors and nefarious state actors could leverage asymmetric warfare to cause global political and economic insecurity.

The 1990s push for interconnected global markets was dealt a blow in 2007. The global economic crisis infected the entire global system that year, resulting in record-breaking international and domestic financial problems. Since then, the prospect of bringing other major powers, such as Russia and China, into a U.S.-dominated international system has diminished. This dilemma may force the United States to make difficult decisions, especially with respect to China’s coercion, which is undermining U.S. interests in the Indo-Pacific. This essay addresses India’s geostrategic significance to U.S. interests, the role it may play in the Indo-Pacific region, and it provides recommendations for U.S. policymakers.

The Indo-Pacific region encompasses over 51 percent of the earth’s surface and includes approximately half the world’s population. More people live in the Indo-Pacific region than anywhere else on the planet. The United Nations has predicted that by seven out of ten people will live in the Indo-Pacific region by 2050. This explains why the majority of the thirty-eight megacities (those with populations of over ten million people) are located there. Further, seven of the fastest-growing markets are in this region. Each year, one hundred thousand commercial ships pass between the Indian Ocean and the Pacific Ocean through the Strait of Malacca—this comprises approximately 25 percent of the world trade. Thriving economies develop defense industries and militaries.

Seven of the ten largest armies in the world are located in the Indo-Pacific region, and twenty-six of the thirty-six nations in the region have militaries. Most of these have armies primarily but also are increasing their naval capabilities. In particular, India’s military modernization is designed to expand both its land and maritime forces as a way to emerge as a great power.

India as a Great Power

In August 2017, India was ranked among the top four militaries of the world. India has the world’s second largest active-duty military with approximately 1.4 million personnel. The nation has almost twice as many reservists, nearly 2.8 million reservists, than active-duty personnel. In 2016, India had the fifth-largest defense budget only behind that of the U.S., China, Russia and Saudi Arabia.

Over the past five years, India has been the world’s largest arms importer. After Russia, the United States is the second-largest supplier of defense equipment to India. Over the past decade, India has increased procurement from U.S. technology and defense companies—from virtually zero to over $14 billion in major systems. India’s economic growth and military modernization depend on a wide range of space, dual use and nuclear, maritime, and defense aviation technologies.

Under the principles of the “Make in India Campaign,” India is balancing these procurements with domestic defense production for internal consumption and foreign military sales. In addition, India has engaged in joint exercises and training with Japan and the United States, and, as members of the quadrilateral security dialogue, all three are again exercising combined with Australia.

With its sights set on supremacy in the Indian Ocean, India’s willingness to use forces beyond its borders has become critical in defending its national interests and preserving the existing order in the region. To support this objective, India wants to increase its yearly arms sales from $150 million to $3 billion a decade. India will need to drastically expand its offerings and number of shoppers in the region.

India does not claim that its maritime cooperation with regional states and naval powers is driven solely by the need to secure sea lines of communication or to counter pirates, gun runners and smugglers. Underlying India’s maritime moves is the need to manifest as a major power and to stand on par with China. India is on a growth trajectory and requires the space necessary to fulfill its military and economic ambitions.

As the world’s seventh-largest economy, India’s GDP is over $2 trillion, which surpasses at least two of the Group of Seven member economies. The Japan Center for Economic Research forecasts that, by 2029, India will evolve into the world’s third-largest economy, only behind that of the U.S. and China. Declines in Russia, China, and Brazil will increase India’s share of global GDP.

India’s regional geography and younger population offer challenges and opportunities for economic growth. The United Nations forecasts that, by 2024, India will become more populous than China, mainly due to a younger age structure. In addition, India’s middle class is estimated between 130 to four hundred million people, and recent estimates indicate that the middle class is expanding and wielding market power. If India wants improved trade and economic relationships, then it will need to increase its market access.

President Donald Trump’s U.S. strategy should defend the existing global system—incomplete as the rules of the games are—against depredation without resorting to conflict with near-peer adversaries. The United States needs to leverage realist and strong attributes in its approach to greater power relations and international systems. It must realize this by acknowledging that a liberal global order is not going to encompass all the major powers anytime soon. It must be stronger in understanding that strenuous efforts are required to defend the existing order against the challenges that revisionist powers represent. This requires taking difficult but necessary steps, such as shoring up U.S. power and deterrence in Eastern Europe and the Western Pacific. It involves rallying traditional and new partners against the threat posed by regional hegemonic expansionism. It also means a willingness to meet revisionist challenges, especially in the Indo-Pacific region.

Over the past three decades, China has reemerged as a great power, but India’s position has been less clear. It is important that India, Japan, Australia, and the United States act on the “free and open Indo-Pacific” motto they adopted to advance their shared regional interests. U.S. policymakers must continue to include India’s defense forces into regional dialogues, military exercises, and to assist India to better integrate its own Russian, British, French, German, Israeli, Japanese and American equipment. India must reduce its dependence on Russian military sales. The United States must support competitive foreign military sales to India, especially as the latter becomes more integrated operationally with the United States, Japan, South Korea and Australia. In support of the U.S. Strategy in Afghanistan and South Asia, the United States must free India from its concern with Pakistan by continuing to stress to Islamabad the importance of deterring the Taliban and other terrorist organizations that target India and its economic interests in South Asia and Central Asia. It is important to alleviate India’s western flank burden by compelling Pakistan to do more, so India can focus eastward.

Military efforts with India must be matched by diplomatic and economic efforts. India is not a member of the Group of Seven (G7), the United Nations Security Council (UNSC), or the Asia-Pacific Economic Cooperation (APEC), which is Asia’s most important economic organization. For several years now, both Indian and American analysts have made the case for India’s ascension into one or all of these organizations.

The United States should support India’s membership in the G7, support India’s effort to become a permanent non-veto UNSC member, and support its effort to join APEC. While China may test these efforts, the immediate impact would result in backlash from Pakistan because an empowered India endangers the very existence of Pakistan. An elevated India would level the influence of China and send a strong message about democracy, freedom-of-navigation operations, and open trade. A democratic and diverse India—one that provides economic prosperity to its people—serves as an alternative model to developing nations that might be attracted to authoritarian models.