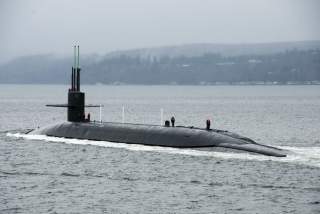 The Trump administration directed the secretary of defense to conduct a thirty-day Readiness Review of the military in a January 27 presidential memorandum on rebuilding the U.S. armed forces. One of the items this review will find is the vital need to build the replacement to the Ohio-class ballistic-missile submarine (SSBN). The Ohio-class SSBN is the only platform in the sea-based leg of the nuclear triad and has been conducting strategic deterrent patrols since 1980. Under the New Strategic Arms Reduction Treaty (New START) this leg of the triad will have 70 percent of the nation’s deployed nuclear warheads. Therefore, this review and the defense budgets it informs must make replacing this SSBN a national priority.

The Navy maintains fourteen nuclear-powered Ohio-class SSBNs built to carry a submarine-launched ballistic missile (SLBM) and operates them out of bases at Kings Bay, Georgia and Bangor, Washington. These ships and their missiles make up the sea-based leg of the nation’s nuclear triad. The sea-based leg of the triad along with the Air Force’s land-based strategic bombers and land-based intercontinental ballistic missiles (ICBM) deters the nation’s adversaries from starting a nuclear war. The Ohio class has conducted strategic-deterrent patrols since October 1980 and will continue to do so until the late 2030s when the final Ohio-class is decommissioned. Getting almost sixty years of service out of a nuclear-powered warship class made the Ohio class an excellent investment when Congress and the military conceived it in the 1970s, and now is the time to make a similarly wise investment.

The Navy determined twelve Columbia-class SSBNs can replace the fourteen Ohio-class SSBNs. The Congressional Budget Office projected the cost of this program in 2016 dollars to be $100–104 billion, with the first ship in the class costing $13.3 billion and the subsequent ships costing $6.7 billion each. The cost of the first ship in a class is more expensive because it includes the nonrecurring research and development costs. The Navy plans to leverage technology used in Virginia-class fast-attack submarines (SSN) to maintain the cost of each ship near or below the $6.7 billion figure.

Additionally, the Navy continues working with Congress to pay for Columbia-class out of the National Sea-Based Deterrence Fund (NSBDF) rather than using money from the Navy’s annual shipbuilding budget. This fund, created in 2015, was designed to show the priority of this shipbuilding program to not just the Navy, but the entire nation and give funding flexibility outside of the military’s normal acquisition processes. To date, the required amount to fund the Columbia class each year has not been placed into the NSBDF as it was designed, but Congress can correct this in the future. Fully funding the NSBDF is a wise move for two reasons. First, utilizing the NSBDF does not force the Navy and lawmakers to choose funding this vital strategic deterrent asset over other priority conventional shipbuilding programs, like Ford-class aircraft carriers, Virginia-class SSNs, or the littoral combat ships. Second, it allows the Navy to receive 10 percent savings by purchasing several of the SSBNs at once over several years. This allows shipbuilders to take advantage of economies of scale through buying and building critical components in bulk. The Navy has been able to achieve similar cost savings with multiyear block buys in the normal shipbuilding budgetary process, but utilizing the NSBDF as it was designed streamlines the process.

What does the nation receive for the $100 billion price tag? First, and most importantly, the SSBN offers the most survivable portion of the triad due to the submarine’s stealth and ability to operate for long periods of time in the wide expanses of the ocean. The world’s oceans are not transparent, and a competitor must search large portions of both the Atlantic and Pacific Oceans trying to find the SSBN and then eliminate the ship. Therefore, even if every ICBM and strategic bomber were destroyed, the nation would still have nuclear weapons available to the president. Would-be adversaries of the United States understand this truth and therefore take pause when contemplating nuclear action against the nation.

The survivability of the SSBN alone should silence any critic of building the Columbia class, but there are several other attributes worth noting. The SSBN’s missiles are able to strike targets anywhere on the globe. Because the SSBN is mobile, it can avoid launching a missile that would overfly a country the United States does not want to provoke. This ability to avoid poor launch trajectories eliminates confusion in a nuclear exchange, while the ground-based ICBMs of the triad do not offer this advantage. Additionally, the SSBNs have two identical crews, which alternate manning the ship for operations at sea, but both work to maintain and repair the ship while it is in port. This dual crewing of the SSBNs enables the submarines to stay at sea more days out of the year than if they were manned and maintained by only one crew. It also requires an overall fewer number of submarines to execute the desired strategic tasking. Finally, several SSBNs are underway at all times in both the Atlantic and Pacific Oceans, offering the president a constant means to retaliate to a nuclear strike. This eliminates the need for the Air Force to maintain strategic bombers airborne at all times.

To accomplish the attributes listed above and execute current strategic deterrence tasking the Navy needs a minimum of ten SSBNs. These ten SSBNs cannot be in any major overhaul and must be either underway or in a short maintenance period, preparing to return to sea. Because the Ohio class required a long (three to four years) midlife maintenance period where the nuclear reactor was refueled, three to four SSBNs were not available to fulfill the strategic deterrence mission. Therefore, fourteen Ohio-class SSBNs were maintained to ensure ten were always available. The Columbia class does not require a midlife refueling overhaul, and only needs a shorter (two years) midlife maintenance period. Thus, only twelve SSBNs need to be built, because only two will be unavailable for a long period of time during the life of this ship’s class.

These ten SSBNs are utilized by the Navy in the following ways. Six SSBNs are homeported and operate in the Pacific Ocean, while four call the Atlantic Ocean home. This decision was based simply on geography. Because the Pacific Ocean is bigger, two additional SSBNs were needed to cover the ocean and the strategic targets in the region. Additionally, the ten SSBNs allow several of the ships to be in short maintenance periods, preparing for an upcoming strategic-deterrent patrol while having enough SSBNs operating at sea undetected, with the ability of the president to communicate with them in a time of crisis. Finally, reducing the SSBN force to twelve is almost a 70 percent reduction from the forty-one SSBNs utilized in the 1960s and 1970s to accomplish the same mission set. This reduction is possible due to the extended range of the SLBM in use and improved quieting technology. The improvements in technology allows the nation to maintain a lean SSBN force still capable of executing all strategic deterrent tasking.

But there are risks as the SSBN force transitions from an Ohio-class force to a Columbia-class force, even if Congress funds the current program of record. First, the oldest remaining Ohio-class SSBN is removed from the fleet in 2027, whereas the first Columbia-class does not conduct its first deterrent patrol until 2030. Based on the current shipbuilding plan, the number of active SSBNs in the fleet available for operations lowers to ten between fiscal years 2032–40. No major SSBN maintenance periods will occur during these years, so the Navy should meet all strategic obligations, but Table 1 here illustrates the SSBN force will be at its minimum number for almost an entire decade. Second, there is no additional ability to extend the life of the Ohio class to create more operating SSBNs while building the Columbia class. Each ship in the class has already received a 40 percent life extension from a planned thirty-year ship life to a forty-two-year ship life. Therefore, if a Columbia-class is not purchased and delivered as scheduled, or the aging Ohio-class submarines are not able to be maintained and operated as planned, the Navy will be challenged to meet its tasking.

The final area of risk concerns the number of missile tubes. The Columbia class only has sixteen missile tubes compared to the Ohio class twenty-four. The Navy is in the process of permanently deactivating four of the Ohio’s twenty-four missile tubes to comply with New START obligations, so the reduction of eight missiles tubes per SSBN will actually only be a reduction of four missile tubes. The FY2010 decision to further reduce the missile tube numbers from twenty to sixteen was done as a cost savings measure to get the total ship cost to $4.9 billion per SSBN in 2010 dollars. General Kehler, commander of U.S. Strategic Command at the time, was one of the military leaders who testified to Congress in 2011 when the debate was occurring over twenty or sixteen tubes. He was more concerned with the overall number of tubes available after the Columbia class was built, rather than how many were on one ship, and felt twelve SSBNs with sixteen tubes gave the right balance of performance and flexibility to an SSBN force he knew would still be in operation well into the future. These leaders seemed concerned that if they pushed for more tubes, then the cost per SSBN would rise to a level where Congress would refuse to approve twelve SSBNs. As outlined in previous paragraphs, a twelve-SSBN force is a “red line” to ensure ten SSBNs are always available.

Nuclear powers like Russia and China are not reducing their nuclear weapons capability. Countries like North Korea, and arguably Iran, seem focused on becoming nuclear states capable of delivering a nuclear weapon. Therefore, the United States must maintain a strategic nuclear-deterrent capability against these known threats and future unknown threats. The SSBN of the sea-based portion of the nuclear triad will carry 70 percent of the nation’s deployed warheads. It operates undetected and is capable of delivering a second strike to an enemy. This capability must be maintained. However, the margin for error to replace the aging Ohio-class SSBN seems to have evaporated, and any further delay in funding and building the Columbia-class SSBN will lead to difficulty in the Navy’s ability to meet its strategic nuclear deterrence requirements. Major cost savings of the program, like building fewer ships or a ship with fewer missile tubes, were explored and the Navy is building a cost efficient replacement SSBN. Therefore, the new administration and Congress should not delay its support for the Navy’s effort to build up the Columbia class.