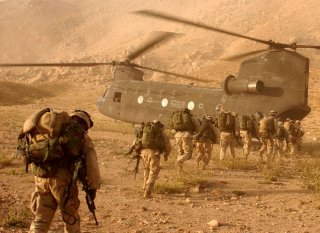 On October 15, President Barack Obama announced a change in the plan regarding the U.S. troops that are currently in Afghanistan. The original plan had been to reduce their number by half before the end of this year and withdraw the rest by 2016, leaving only enough to protect the embassy. Now, as the President said, the U.S. will “maintain our current posture of 9,800 troops in Afghanistan through most of next year, 2016.” Critically, he also added that the troops’ “mission will not change.” That is regrettable. American efforts in Afghanistan, through two consecutive administrations, have resulted only in seeing the war worsen and American interests deteriorate. If ever there was a time to change the mission, it is now.

The number of Taliban attacks increased during virtually every year between 2003 and 2010. With each increase in attacks, there was a subsequent increase in the number of U.S. combat troops—which resulted in yet another expansion of the violence. Despite the two troop surges into Afghanistan (2009 and 2010) and the withdrawal of most combat troops in the years that followed, the violence in Afghanistan and the strength of the Taliban have continued to grow, and are greater now than at any time since 2001. Part of the reason for this continually deteriorating situation is America’s reliance on the military option to solve political, historical and ethnic problems. Had our leaders spent at least as much effort on reaching a negotiated end to the conflict as they have on lethal force, it is likely the war would have ended years ago.

In 2009 then-General David H. Petraeus, the man who would become the commander of Obama’s second surge a year later, famously noted that leaders “have to promote reconciliation. You can’t kill or capture your way out of an industrial-strength insurgency.” Yet that is exactly what American leaders have done virtually every year of the war. I was deployed in Afghanistan during the height of the surge (2010–11) and observed firsthand how American policy was focused almost exclusively on militarily defeating the Taliban. Pakistani journalist Ahmed Rashid was even more direct. In a recent email message he sent me, he wrote, “The U.S. military was always against negotiations especially when Petraeus was in Afghanistan.”

The best chance to reach a negotiated end of the war came during the surge. Rashid, who covered the situation extensively, noted, “The real opportunity was in 2010 when secret talks brokered by Germans started between U.S. and Taliban in Germany.” However, he said, “The White House never supported those talks properly and the military were against them.” But that hadn’t been the only opportunity for peace scuttled in 2010.

In February 2010, the Washington Post reported what was assumed to have been a boon in the fight against the insurgency: the capture of a major Taliban figure. “Intercepted real-time communications handed over to Pakistani intelligence officials,” the Post reported, “have led to the arrests in recent days of Mullah Abdul Ghani Baradar, the Afghan Taliban's No. 2 commander.” As important as it was, the capture appeared to represent a new level of cooperation between the U.S. and Pakistan that could help defeat the Taliban. But as Dexter Filkins later reported in the New York Times, things were not as they appeared.

Instead of improving the chances of ending the war, the capture of Mullah Baradar actually ended a promising chance to negotiate an end to it. Filkins wrote:

Now, seven months later, Pakistani officials are telling a very different story. They say they set out to capture Mr. Baradar, and used the CIA to help them do it, because they wanted to shut down secret peace talks that Mr. Baradar had been conducting with the Afghan government that excluded Pakistan, the Taliban’s longtime backer… “We picked up Baradar and the others because they were trying to make a deal without us,” said a Pakistani security official… “We protect the Taliban. They are dependent on us. We are not going to allow them to make a deal with Karzai and the Indians.”

American political and military officials have only made tepid efforts in trying to secure a negotiated settlement. Initially, U.S. officials publicly stated they would not negotiate with the Taliban unless they renounced violence and agreed to abide by the Afghan constitution—which the Taliban would never do, as it utterly rejected the Afghan constitution; it would be tantamount to an admission of defeat. The U.S. later quietly dropped those demands, but to date has done little of substance to energize peace talks. That must change for this war to end.

Reaching a settlement now is going to be much harder than it was in 2010. But it doesn’t matter how hard it is. Concerted, focused and relentless diplomatic leadership by the United States might be the only thing that could end the war in the foreseeable future. The goal must be to seek the best conditions under which the fighting can end. But the fact is there are no good solutions to be had.

The entry point for all parties participating in the talks must be an understanding that no one is going to get all they want and likely most won’t be happy with the final terms. But it is in America’s national interest for this war to come to an end. The military-focused policy we’ve pursued since October 2001 has utterly failed. American military power will never bring the conflict to an end. American diplomatic power, on the other hand, can.

U.S. policymakers must honestly ask themselves: does it make sense to continue supporting military operations that have not, and in fact cannot, attain American strategic objectives, or change course and place considerably more resources and effort behind diplomatic efforts that have a real chance to end the war? It’s time to end our addiction to these military-first policies (which have served us so poorly) and instead employ the superior power resident in diplomacy.