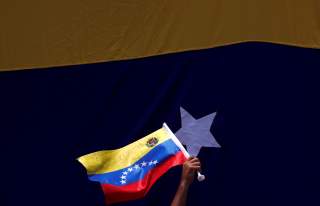 The world needs a strategy for an escalating crisis in Venezuela. The long-term recovery of the country depends on a government transition, to be sure, but ways to mitigate the humanitarian suffering will increasingly be required in the meantime.

The worsening economic situation, now reinforced dramatically by the Trump administration’s oil sanctions denying the Maduro regime’s access to earnings from oil exports, means that we should expect things may get worse—much worse—before they get better. What to do?

The Trump administration needs to work with the sixty countries that have already recognized parliamentary speaker Juan Guaidó as the rightful president of Venezuela to develop a new plan in case the crisis takes a major turn for the worse. If it does, the right strategy could even elicit Russian and Chinese tacit support, since the combined $50 billion Caracas owes them in debt repayments will surely not be forthcoming if a Maduro government cannot rescue its economy, ship its oil or garner hard-currency earnings from its vast oil resources.

The potential escalation requires a two-part strategy. First, offer unconditional humanitarian aid, on a scale suited to the problem, rather than the largely symbolic amounts now prestocked near Venezuela’s borders with its neighbors. Second, in a worst case and especially if the Maduro government refuses aid, prepare for a military option that would create and protect a safe haven inside the country but not in Caracas and not nationwide, should the nation descend towards the kind of anarchy that would make such a zone the least bad idea for saving lives. This would be an absolute last resort, but we should start thinking and talking about it now—at least to frame and assess (and improve) our options.

In order for the economic sanctions to have the intended effect of depriving the Maduro regime of its sources on power, the international community must find ways to bring aid into the country.

In 2018, Venezuela earned $20 billion in oil revenues and about $11 billion in hard currency (Venezuela also sells oil to China and Russia as debt repayment). Energy expert Francisco Monaldi estimates that the Maduro government may be able to generate half of that amount selling its oil to India at a deep discount. Thus, the sanctions are likely to reduce inflows of hard currency by at least $5 billion. If we assume half of that would normally go to the purchase of food and medicine, there will soon be a $2.5 billion deficit per year in an already starved nation. Venezuela has $8 billion in reserves, and given historical precedent, Nicolas Maduro will prioritize the use of those funds to strengthen his grip of power rather than feeding his citizens.

The international community should consider commitments of this $2-3 billion magnitude for humanitarian aid until the conditions exist for a proper assessment on the ground. A dramatic increase in the humanitarian response is not only strategically important for the sanctions to have their intended effect of weakening Maduro’s grip on a starving nation, it is most importantly a necessary step given the depth of the crisis. As such, humanitarian aid needs to be delivered apolitically to maximize its chances of reaching the people in need.

Even before these new sanctions were applied, the numbers were staggering. The Venezuelan economy contracted over 50 percent in the last five years and suffered the largest contraction in the world in 2017. Ninety-one percent of people are in poverty. Nine out of ten Venezuelans go to bed hungry, and 62 percent of Venezuelan children are at risk of nutritional deficit. There are shortages of almost every basic medication, previously eradicated diseases are back with a vengeance, and there has been a rise in preventable deaths given the collapse of medical infrastructure. In 2015, the Ministry of Health reported a one-hundred-fold increase in neonatal deaths, and only in the last three months hospitals reported five thousand preventable deaths. Aid has been trickling into the country from many sources, from remittances that people send to their loved ones, from medicines brought in suitcases and inside shipping containers (once bribes are paid at the border), and through NGOs that were able to cross the border back and forth. The amounts are small and not commensurate with the immense need. Maduro has been conducting a silent massacre of his own people. We must avoid being complicit in any worsening of the situation.

But as of now, Maduro is unlikely to officially accept such offers of aid, regardless of their source and their sincerity. This leaves us with the distasteful question of whether there is anything the United States, working with other countries in the western hemisphere, can do militarily about the crisis in Venezuela?

Even to ask this question can sound sacrilegious in a region where memories of past U.S. imperialism and interventionism are still raw. However, with millions of Venezuelans fleeing their country, millions more at risk of privation within the nation’s borders, and with foreign offers of humanitarian relief supplies being thwarted by the Maduro government, it is important to think through our collective options. In fact, most are bad. But there may be one that, under certain circumstances, could have logic if properly executed.

In considering our options, let’s first get invasion and regime change off the table. Think back to Operation Just Cause, the U.S. mission to overthrow Manuel Noriega and install a rightfully elected successor government in Panama in 1989. Panama is roughly one-tenth the size of Venezuela in terms of population, land mass, and the size of military forces. Yet it took twenty thousand U.S. troops, enjoying control of a military base within the country at the onset of hostilities, to settle the matter—after three days of fighting and a loss of twenty Americans. That was, moreover, a good outcome and a victory. Scaling up by a factor of ten or so for Venezuela means that even a highly successful regime-change operation would be a daunting prospect—and Venezuela’s dozens of gangs, criminal organizations, and state-sponsored militias raise the prospect of substantial opposition to any invasion, together with a highly unstable society even after Maduro’s possible departure.

At present, Latin American nations also oppose this kind of option. Even if they changed their minds, perhaps due to a collapse of the state or the use of violence by the regime in Caracas against its own people, the neighbors of Venezuela and other Latin states do not have significant numbers of troops capable of rapid offensive operations beyond their own borders. Any regime-change operation would necessarily be dominated by the United States. It would also require a global coalition—including the United Nations—of several tens of thousands of troops, for any stabilization mission after such an invasion.

Most other military options do not appear viable, either:

For example, could a U.S.-led military coalition escort convoys of humanitarian relief supplies from neighboring countries into Venezuela, so that the Maduro government would not be able to prevent their movement and distribution?

To reach the preponderance of the Venezuelan population, this would be a daunting operation since some military opposition would have to be expected. In Somalia in the early 1990s, for example, the United States had several thousand troops backing up aid distribution—in a population of less than ten million with no serious military opposition, yet still could not prevent the debacle of Black Hawk Down. It is hard to see how this kind of mission could be attempted without at least twenty thousand or more foreign troops, including several brigade combat teams to ensure tactical superiority in any firefights that might occur, and including airpower to prevent the Venezuelan military from massing against any particular convoy or supply line.

What about possible airdrops of relief supplies? American military transport aircraft, escorted by fighter jets and attack aircraft, could drop supplies into various parts of Venezuela. There is a good chance that such operations could intimidate the Venezuelan military into not mounting any concerted opposition. Even if any aircraft did take ground fire, the numbers of American personnel at risk would be limited. However, making a meaningful difference in the well-being of thirty million Venezuelans over an extended period of time would make the Berlin airlift seem like a walk in the park by comparison. Delivering just two pounds of food a week for each Venezuelan would mean thirty thousand tons of supplies every seven days—with a single C-130 carrying only about ten tons. That’s three thousand flights a week, or almost one a day for every C-130 in the U.S. military inventory.

In order to exacerbate pressure on the regime, we could impose a maritime blockade to limit trade, especially in oil, and ask neighboring South American countries to take corresponding action at their land borders with Venezuela. This approach would be designed to back up the new U.S. sanctions against Venezuelan oil exports to the United States, preventing Caracas from finding alternative buyers or otherwise circumventing the sanctions policy.

Today’s U.S. Navy is stressed around the world, but there is little doubt this operation could be conducted if other missions were curtailed, using a combination of maritime patrol aircraft and surface combatants. Oil tankers are big and slow, and their points of origin are well known. One or more might need to be disabled, or in a worst case sunk, to establish our seriousness of intent. Some sanctions evasion with smaller ships might still occur, but it could not realistically begin to compensate for the loss of large-ship exports. However, this would be an act of war against the Venezuelan government according to international law, and without strong consensus in the region and the world to support it, could elicit international condemnation of the United States—with no guarantee of successfully resolving the crisis.