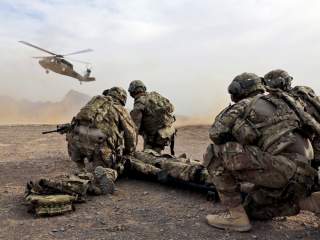 In turn, regimes that enjoy a greater degree of security might then be more inclined to take part in cooperative efforts designed to safeguard all states—democracies and non-democracies—from common threats. The Security First paradigm rejects the idea of using external military pressure to bring about change in other societies. In essence, it asks those who are dissatisfied with the level of civil, political or social freedom in their countries to forego asking for American or Western forcible intervention to bring about immediate relief in the short run. This is seen as the price to be paid for maintaining a series of cooperative relationships and security bargains that will enhance regional and global security.

Etzioni's gamble is that a Security First approach could create conditions for long-term, sustainable evolutionary change in a more liberal direction that would end up being more effective than the track record of the interventionists. Moreover, nothing in the Security First approach prevents extensive civil society efforts (that is, efforts that are not government-sponsored or -controlled) to try and persuade other societies to undertake reform; but the emphasis would shift to preaching about, rather than the promotion of, democracy. Etzioni’s confidence in this outcome is buttressed by the assessment that such long-term change did occur in East Asia over several decades: as regimes enjoyed a greater degree of internal and external security—and the rising prosperity that these conditions generated—there was a greater willingness to explore reform, to push for greater openness and pluralism and to anchor governance in adherence to the rule of law. In essence, the Security First approach takes the position that most states have the opportunity, over time, to be rehabilitated rather than wrecked—even if the process is generational rather than instantaneous.

In all cases, if liberal democracy is not a realistic possibility, there can exist other types of regimes—from illiberal democracy to soft authoritarianism—that may work to cooperate on vital issues, to reject terrorism and extremism, and to create conditions for eventual evolution along more liberal lines. These governments may also enjoy some degree of legitimacy even if they are not empowered by the ballot box. The assumption that only those who share a commitment to liberal values can be effective partners consigns all nonliberal forces beyond the pale, and draws no real distinctions between the minority, who actively seek to damage Western interests, and the vast majority, with no such aims.

There is also a second trade-off that Etzioni asks for: that citizens of some states (and their governments) voluntarily forego some of their theoretical rights under international law to freely choose their international relationships in order to help guarantee stability. Etzioni has argued, notably with his Mutual Assured Restraint proposal for decreasing tension between the United States and China, for those states that lie between the great powers and major blocs to accept some form of neutral status. He argues that this will decrease tensions and facilitate cooperation among the key power centers on key global issues that he feels are essential for overall global security. In return for foregoing the option of joining specific military alliances or blocs, neutral buffer states would have to be guaranteed the ability to determine their own domestic institutions and to pursue their economic interests.

Thus, the United States would pledge not to expand its system of alliances to encompass nations on the Chinese or Russian frontiers, in return for firm, actionable commitments by both Moscow and Beijing to cooperate on critical issues. One such issue is accepting the necessity for interventions, when diplomacy has failed, in order to deproliferate rogue regimes or to stop massive violations of the right to life. In addition, these countries would refrain from interference in the affairs of states lying on their borders as long as a set of minimal security conditions were being respected. (It goes without saying that failure on the part of Moscow or Beijing to respect those two conditions would invalidate the entire agreement.)

In an unipolar world dominated by the United States, these types of concessions would not have been needed or, perhaps, even desirable. Pretending that the United States can act on a strategy of primacy when global conditions have clearly changed is not a sign of resoluteness or determination. In addition, the shift implicit in Security First—from promoting democracy to encouraging liberal evolution by creating conditions of stability, both within states and in the larger regional and global order—may not align well with past statements about the U.S. obligation to spread democracy, but has a much better possibility of addressing the credibility gap in U.S. foreign policy. The approach may make possible a “stable synthesis” that would allow the United States to continue to articulate its values, without undermining them or the possibility of effective cooperation with nondemocratic regimes on shared interests.

American policy makers, starting with the 2016 presidential hopefuls, should be on the lookout for an approach to world affairs that retains U.S. involvement and leadership in the international system, but that avoids overstretch—an approach that is true to a moral compass but not draining of American resources and energy. The Security First approach has that potential.

Nikolas Gvosdev, a contributing editor at the National Interest, is coauthor of U.S. Foreign Policy and Defense Strategy (Georgetown, 2015), and the recently published Communitarian Foreign Policy: Amitai Etzioni’s Vision (Transaction, 2016), from which this essay is adapted.