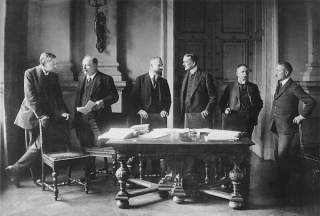 A hundred years ago, on June 28, 1919, the Treaty of Versailles was signed, bringing an end to what was then called The Great War.  Although the fighting had ended with an armistice, and President Woodrow Wilson had called for “peace without victory,” the treaty applied the familiar rules of victor’s justice.

Germany and its allies were forced to admit guilt for the war, give up territory in Europe and colonies abroad and commit to the payment of massive reparations. These terms were modelled, in many respects, on those imposed by Germany after the Franco-Prussian war in 1871. However, they took no account of the fact that, by 1918, the entire financial structure of the European economy was in ruins, making the extraction of reparations immensely difficult.

The treaty was controversial at the time, and has remained so ever since then. The terms of the debate were set, in large measure, by a brilliant young economist, John Maynard Keynes, who had served as a delegate of the British Treasury to the Paris Peace Conference.   Keynes first book, The Economic Consequences of the Peace, argued that a vengeful “Carthaginian” peace would be unworkable and would prevent economic recovery from the war.

Although Keynes’ work was focused on economics, it also reflected his background in the intellectual milieu of the Bloomsbury Group. Several members of the Bloomsbury Group, including Keynes himself, were conscientious objectors. Few shared the official view of the War as a triumph over German aggression. Rather, they saw it as a catastrophe, in which Germany was, at most, the first among equals in creating the disaster.

The Versailles Treaty was, unsurprisingly, bitterly resented in Germany. Moreover, because the military government that had run the war collapsed in its aftermath, the treaty was signed by its democratic successors.  The militarists, led by generals Erich Ludendorff and Paul von Hindenburg, were happy to cultivate the myth that their armies, still in the trenches in France, had been betrayed by a “stab in the back” from Jews and socialists at home.

Among the most receptive hearers of this message was a young corporal and winner of the Iron Cross, First Class, Adolf Hitler. Hitler became a prominent far-right politician, supported by Ludendorff and ultimately appointed as Chancellor by Hindenburg.

Meanwhile, Keynes enhanced his reputation with The Economic Consequences of Mr. Churchill a critique of the “austerity” policies adopted by the British government in an attempt to restore the prewar gold standard. With the advent of the Great Depressions, Keynes developed his ideas into his masterpiece, The General Theory of Employment a systematic argument for government action to stabilize the economy. Meanwhile, Hitler’s program of rearmament worked as an unplanned form of “military Keynesianism,” bolstering his support in Germany as it led inexorably to war.

Both the war against Hitler and the postwar economic reconstruction were run on broadly Keynesian lines. Most notable, and most successful was the Marshall plan, which led to the revival of the West German economy, and was followed by three decades of unparalleled growth and widely shared prosperity. The contrast with East Germany, where the Soviet occupiers shipped much of the country’s industrial infrastructure back to Russia, producing an economic basket case, which remained as a burden on the conquerors, was obvious.

Postwar prosperity was not confined to Europe. The adoption of Keynesian policies produced, or at least coincided with, the longest period of widely shared prosperity in the history of the United States and other developed countries. Not only was economic growth consistently strong, but income distribution was equalized to a degree not seen before or since. At the time, this “Great Compression” was seen as part of the natural evolution of a capitalist economy but in retrospect, it is quite exceptional.

The high point of support for Keynes was reach in the late 1960s, when Keynesian economics was at its apogee and opposition to the Vietnam War spilled over into more general anti-war and anti-military sentiment. The 1969 film, Oh What a Lovely War, characterized the prevailing view of the Great War as a bloody fiasco.

Relatively less attention was paid at the time to the work of a German historian Fritz Fischer whose archival work showed, beyond any reasonable doubt, that the policy of the German government in 1914 was one of aggressive imperialism, seeking to place the German Empire on a par with the long-dominant British.  The fact that the Entente powers, particularly Russia, were equally guilty of aggressive expansionism was not relevant to his inquiry.

In the 1970s, with the breakdown of the Keynesian long boom and the end of the Vietnam War, sentiments changed. The Vietnam War produced its own version of the “stab in the back” legend, according to which weakness of will at home undermined a military that had never been defeated in the field.

Even among those not inclined to such conspiratorial thinking, it became the norm in the foreign-policy community to deplore a “Vietnam syndrome” involving unwillingness to use military force to serve national ends. In this context, Fischer’s work became the basis of a new, pro-war orthodoxy, in which all the conflicts of the twentieth century were seen as necessary responses to aggression. The Versailles Treaty was reinterpreted as a lenient settlement, and its failure excused in all sorts of ways.

By 1991, President George H. W. Bush could declare an end to the Vietnam syndrome.  Bush was speaking after the collapse of the Soviet Union in the wake of the first Persian Gulf war, the first war since the Franco-Prussian war to be run at a profit. Contributions from U.S. allies more than covered the direct costs of the war.

The year 1991 marked a near-complete eclipse of both Keynesian economics and the critique of militarism to which Keynes contributed. In particular, the idea that governments must pay their debts (however incurred) or be subject to the rightful wrath of the “electronic herd” re-emerged as a central element of the “Washington consensus.”

The twenty-first century has seen these ideas tested to destruction. The wars launched under the second Bush administration, with every confidence in quick victory, drag on nearly twenty years later, with no end in sight. Even the seeming successes, like the first Gulf War and the Libyan intervention, can be seen in retrospect as paving the way for future disasters.

On the economic front, the Global Financial Crisis of 2008 was followed by a decade of failed austerity policies in which the lessons of the 1920s have been painfully relearned. As a result, Keynesian economics has seen a resurgence. The free-market opponents of Keynesianism, while still numerous, have had little to offer in policy terms, and have been marginalized on the political right, their historical home, by the rise of Trumpist populism.

We are then overdue for a reassessment, not just of the Great War and Versailles, but of the Keynesian successes of the mid-twentieth century, including the Marshall Plan and the postwar Golden Age of equality and full employment.