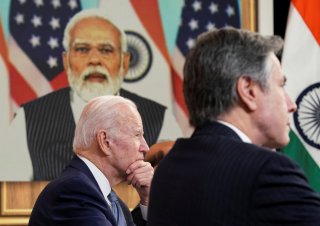 Where the Kremlin is the main culprit in Ukraine, Washington’s liberal interventionist policies still precipitated and then exacerbated the Ukraine crisis; American bluster in the wake of the invasion alienated non-European allies and hurt U.S. bargaining power with middle powers and smaller states alike. These developments were mistakes of America’s own choosing and make finding a diplomatic solution to the conflict much more difficult.

Washington must accept that the international system has fundamentally changed since 2001 and adjust its posture to avoid further embarrassment and harm to its vital national interests—chief among them its global financial primacy. It must push to end conflicts involving middle powers, like those in Ukraine and Yemen, through diplomacy rather than allowing them to fester and escalate. Any lengthening of these wars of attrition causes unnecessary human suffering, as well as further destabilizes the U.S.-led international order that is already pushed to its breaking point. It also devastates Americans at home with higher energy and food prices and soaring inflation. Such blind, dogmatic moralism then is not only futile, irresponsible, and dangerous, but it is also immoral as it could spell disaster for billions in the Global South who could soon face an unprecedented hunger crisis and slide into destitution.

Washington faces a choice: accept multipolarity and the rise of middle powers and thus adopt a more sensible, realist grand strategy that is mindful of “the resurgence of both realpolitik and cultural sovereignty,” or deny that reality and insist on an untenable posture of a “Monroe Doctrine for me, but not for thee.” Should hubris impel it to choose the latter, then Washington will have ensured needless strife in many more RSCs than just the former Soviet bloc, damaging America’s standing and jeopardizing the lives of billions.

Arta Moeini is an international political theorist and the Director of Research at the Institute for Peace & Diplomacy.

Coleman Hopkins is a Research Associate at the Institute for Peace & Diplomacy.