America Needs a Taiwan Strategy for the 21st Century 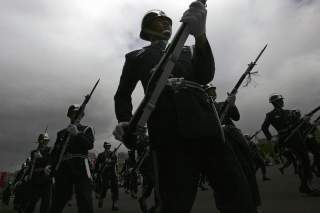 The current framework for the trilateral relationship between Washington, Taipei and Beijing requires recalibration. Relations between Washington and Beijing have had a disproportional influence in how the former conducts its informal relations with Taiwan. While a Taiwanese policy of maintaining the “status quo” remains the best near-term option, it is unsustainable in the long term. Moreover, continuing the United States’ passive and ambiguous approach effectively defers to  irredentist claim of the People’s Republic of China (PRC) over Taiwan, and will eventually lead to greater instability in the Taiwan Strait.

The massive military buildup across the strait by the People’s Liberation Army (PLA), and the political leadership’s continued refusal to renounce the use of force against Taiwan, are a threat to the peace and security of the Western Pacific area. While the United States has managed to deter Beijing from taking destructive military action against Taiwan over the last four decades, because the latter has been relatively weak, the risks of this approach inch dangerously close to outweighing its benefits as the PLA modernizes. Greater clarity of U.S. commitments to defend Taiwan, and demonstrative commitments by Taiwan to its own defense, are critical for purposes of deterrence and stability. As the PLA grows stronger, a perceived lack of commitment by the United States to defend Taiwan may further embolden Beijing to use force to resolve the Taiwan issue.

While there is wide latitude for policymakers within Taiwan and the United States to work within the existing framework to preserve peace and stability, first it requires a clearly stated agenda of soft balancing by the United States. There is a dangerous logic behind the apparent fear over President Trump questioning American adherence to the United States’ “One China” policy. Lost in the polemical discourse is the necessary recognition that the only legal underpinning of U.S. policy toward Taiwan is the Taiwan Relations Act (TRA).

To be sure, U.S. policy towards Taiwan over the past forty-five years has operated on the premise that America’s primary interest is in the process—as opposed to the outcome—of resolving differences between the two sides of the Taiwan Strait. What by design was inherently a passive approach intentionally ceded the initiative of shaping the outcome to the two other parties. It was an approach that some senior U.S. policymakers at the time expected would create a fait accompli, and yet one that provided Washington with the flexibility to adapt and respond to broader geopolitical challenges while maintaining stability in the strait. The power disparity between the two sides has gradually eroded some of the original commitments made under the TRA and Six Assurances.

Despite expectations to the contrary, Taiwan thrived in the ensuing four decades after 1972. The government liberalized from the top down while an active civil society fervently pushed for political reforms from the bottom up. Taiwan evolved from an authoritarian government to a vibrant democracy. Support for Taiwan and its democracy grew within the United States as well.

As the power disparity between Taiwan and China widens, a policy based on the process is and will increasingly be under strain, leaving Taiwan more susceptible to coercion and Beijing more emboldened to use military force. Indeed, the PRC is gradually and unceasingly pushing for its own desired outcome for Taiwan.  All the while, America’s focus on process is drawing it towards China’s objectives, at the expense of its own values and strategic interests.

To be sure, some American scholars and former policymakers have floated an alarming idea about the need to accommodate China by reaching a new modus vivendi with Beijing—which will effectively abandon Taiwan. Yet debate over a Hobson’s choice obscures a much-needed discussion about a Taiwan strategy that focuses not only on ensuring a peaceful process, but also on a vision for a desired outcome that is more aligned with the United States’ strategic interests in Asia.

As the two sides of the Taiwan Strait struggle to engage in dialogue, the scope of this process-based approach to policymaking has barred U.S. policymakers from actively shaping conditions in the Taiwan Strait that will be more conducive to long-term peace and stability. This outdated and partly flawed premise is based on a Washington tendency to construct events in the Taiwan Strait in binary terms—either independence or unification—a false dilemma that Beijing has framed as a Hobson’s choice.

The TRA, which legally governs relations between the United States and Taiwan, has led to the interpretation that the primary goal of U.S. policy towards cross-Strait relations is to ensure that a resolution is “not coercive, unilateral, or detrimental to U.S. interests.” But an overemphasis on process overlooks the need for a positive outcome. Indeed, there is an important and fundamental question about the long-term viability of this approach. The previous ambiguous approach has outlived its utility; the effects have been an emboldened Beijing and a Taiwan that is now being pushed into a corner.

Alternatives to gradual change present equally destabilizing propositions, and a great deal of uncertainty comes with any change. Yet fear of even thinking about change could lead to a state of paralysis, which would be equally disruptive in the Taiwan Strait. Sustained and high-level discussion is needed between the United States and Taiwan to determine a new optimal equilibrium that reflects the objective reality in the strait—not simply as it was in 1979.

Secretary of State Rex Tillerson recently confirmed that the Trump administration is reviewing U.S. policy toward China, but will abide by the long-standing “One China” policy, and that moreover, the administration intends to keep all of its commitments to Taiwan. Tillerson has asked, “Is the One China policy sustainable for the next 50 years?” This is a valid question.

At the very least, it behooves the Trump administration to restate the longstanding American “One China” policy as articulated by James Kelly, assistant secretary of state for East Asian and Pacific Affairs, mentioned earlier: “I can tell you what it is not. It is not the One China policy or the One China principle that Beijing suggests.”

More importantly for long-term peace and stability in the Taiwan Strait and the region, President Ronald Reagan’s Six Assurances are necessary, but may no longer be sufficient. While there is a need to ensure that the original assurances are adhered to, renewed assurances for Taiwan are needed in this period of growing uncertainty. Much has changed since the Six Assurances and other “non-papers” were issued back in 1982. Augmenting the original assurances with renewed assurances that clarify preserving Taiwan’s democracy as a vital interest of the United States, not supporting an outcome that the majority of free Taiwanese do not support, and not “co-managing” the Taiwan issue with the PRC are all necessary in a recalibrated framework for advancing U.S.-Taiwan relations in the twenty-first century.