America Needs to Take Control of the Coronavirus Disaster 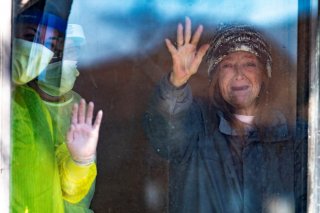 As the human cost of the coronavirus is rising around the world, so are the voices to get to the bottom of the origins and the timeline of its spreading. We need answers to be prepared for the pandemic and to avoid its repetition. It is time to start thinking about investigatory commissions and tribunals focusing on the global and domestic roots of the disaster.

From emerging markets to the most advanced nations in the world—including the United States—the social and economic consequences are severe and long-lasting. Coronavirus is engendering a paradigm shift in the twenty-first century globalized order. It is too early to predict all the consequences that will affect the United States, our allies, our adversaries, and the rest of the world.

In a landmark report, the International Monetary Fund projects a global economic downturn of negative 3 percent growth—the likes of which we have not seen in modern times. This is their “baseline scenario,” which assumes that the pandemic fades in the second half of 2020, with progressive unwinding of containment protocols.

U.S. GDP could shrink by as much as 6 percent, bringing other economies like China within striking distance—or even beyond—that of America. If ever there was an event that could unseat a global hegemon short of a world war, then an unbridled pandemic might be it.

Not a Strategic Surprise

Throughout human history, we have failed to forecast and prevent catastrophic events. During World War II, both Operation Barbarossa and the attack on Pearl Harbor came as strategic surprises. Other unexpected conflicts include the Egyptian-Syrian attack on Israel during the Jewish High Holiday of Yom Kippur in 1973, and of course, the 9/11 strike by Al Qaeda against the United States. These events all hold something in common: the writing was on the wall. In fact, in all cases intelligence communities provided the warnings. Unfortunately, the intelligence reports given prior to these events were either ignored or did not reach the right leaders, who were entrapped in faulty paradigms.

Many have intensely studied the reasons for these failures, however, what unites all of these historical examples is a limited circle of people who were privy to the warnings, their widespread impact, and the nature of the ensuing national mobilization. Life after these events never returned to pre-catastrophe modus operandi.

History has a habit of repeating itself. Then, as now, intelligence (and scientific) warnings were ignored—this time about the potential for a deadly pandemic. The coronavirus pandemic is not a black swan: it should not have come as a surprise. This strain of coronavirus has already claimed more U.S. casualties than most famous U.S. disasters, and when all is said and done, it is likely to claim more American lives than the Vietnam and Korean wars combined (58,200 and 44,500 respectively).

It should go without saying that a national security concern of this magnitude should have been taken far more seriously. It was not.

There is no excuse for this failure to prepare. An airborne, highly contagious respiratory infection was always the most likely candidate for a devastating pandemic. Warnings have abounded over the last twenty years. In 2007, a group of Hong Kong scientists published a seminal article entitled “Severe Acute Respiratory Syndrome Coronavirus as an Agent of Emerging and Reemerging Infection.” This paper warns about the potential for the deadly respiratory virus jumping from bats to exotic game food animals (such as civets) to humans, ultimately resulting in a pandemic.

Severe Acute Respiratory Syndrome (SARS), Middle East Respiratory Syndrome (MERS), Swine Flu, Bird Flu, and Ebola have all demonstrated the clear and present threat of pandemic. While these infections were effectively stopped through early interventions and severe travel bans, the United States and other countries did not sufficiently learn the necessary lessons and prepare for the “big one” to come. To wit, in 2019, a series of war games were conducted at the National Security Council. The exercise, called “Crimson Contagion” modeled a massive respiratory epidemic hitting the United States and straining the system to the point of failure.

The exercise exposed many conflicts between the Federal Emergency Management Administration (FEMA) and (Health and Human Services) HHS. Not enough was done to improve cross-team operations. This is sadly of little surprise, as it is just another mark in a list of poor decisions that include ousting the National Security Council’s Senior Director Rear. Adm. Timothy Ziemer, who championed pandemic preparedness; Homeland Security Adviser and my Atlantic Council colleague Tomas P. Bossert, and cutting essential funding such as the Centers for Disease Control and Prevention (CDC) global pandemic budget.

As the coronavirus epidemic hit, the U.S. intelligence community warned that China was covering up the severity of the disease and projected a severe global impact. Whether ignored, miscommunicated or shared within too limited a circle of decisionmakers—the intelligence was not acted upon. Instead, the CDC and the Food and Drug Administration (FDA) engaged in counterproductive bureaucratic turf battles for two crucial months, unable to develop a coronavirus test. The FDA blocked academic labs and the private sector from producing and distributing a test until March 2020. At the time of this writing, the coronavirus tests are not sufficiently available, and an antibody test is not ready.

But it is not as if the policy playbook for how to handle a growing pandemic wasn’t available. One example, the CDC’s 2007 publication of the Interim Pre-Pandemic Planning Guidance clearly and effectively outlines what should have been done in a similar scenario. But despite the constant communication from medical leaders warning and advising action, the CDC, WHO, FEMA, HHS, and the Oval Office did not follow the pandemic defense protocols.

The politicians and senior bureaucrats pre-empted the institutions set in place to handle this kind of disaster were ignoring the coming disaster, whistling past the graveyard, and hoping for a miracle.

The cavalier attitude of President Donald Trump who scoffed at the threat early on, the bureaucratic public health failure from China to the United States, and delayed determination from the World Health Organization which finally declared the coronavirus a pandemic on March 11, 2020,  have combined to cause a global health and economic disaster of historic proportions.

For centuries, people have relied on their leaders to identify, manage, and remedy threats to their lives. That is one of the most basic reasons for government. America’s government has failed its citizens while it appears that China’s has failed the world.

The coronavirus pandemic is the greatest failure of leadership in the western world since the two World Wars. Add it to the Cuban missile crisis, Vietnam, the 9/11 fiasco and the 2008 economic crisis, and you begin to get the picture.

We will now likely have the misfortune of navigating another unprecedented economic recession thanks to what is sure to be a continued government mismanagement of this pandemic.

Moving forward, we must convene domestic and international investigatory and judicial tribunals to establish what when wrong, and who is responsible. Far from being partisan slugfests, or political witch hunts, these need to be bipartisan, science, policy- and law-based undertakings. They need to enjoy public support and trust. The post–9/11 Congressional Commission may be one such model.

Furthermore, we need to explore how to reform and reconfigure global and national public health systems to prevent another pandemic from reoccurring. We need extensive audits of other systemic threats to make sure we are prepared for the next black swan event.