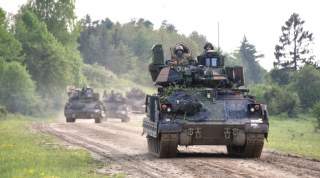 Conservatives can have a larger military for less money. Today budget hawks and fiscal hawks battle it out, each claiming a portion of the conservative mantle as their own. Shockingly enough conservatives can succeed with both approaches by looking to history and the hi-lo mix force structure strategies of the past. These strategies sought to purchase high-end capabilities in a set ratio with lower-capability but cheaper platforms. An example was the Air Force’s decision to buy three F-16s for every high-end F-15 in the 1970s in order to have a dynamic fighter-interceptor while still maintaining a large tactical-fighter inventory to cover day-to-day challenges. A similar strategy could be pursued today, buying both ships and aircraft in hi-lo mixes in order to complete both basic missions and challenging, anti-access/area denial missions in stride in the air and on the sea.

Those two operational arenas are important to consider as part of a conservative defense policy. Army forces have been traditionally garrisoned at home and on overseas bases along the periphery with the support of allies in order to deter opponents and keep costs down. But, as in the days of old, it is naval and air forces that will handle everyday demonstration missions and the maintenance of global interests, signaling areas of American concern while swiftly addressing crises in gray zones in their embryonic stages with ships and aircraft that can be here today and somewhere else tomorrow. As such, the Navy and Air Force should be appropriately sized, leveraging a hi-lo mix, for such a mission set.

Conservatives must be mindful that strength can invite adventurism. Witness Secretary of State Madeleine Albright’s question to General Colin Powell, then Chairman of the Joint Chiefs of Staff, “What is the point of having this superb military you’re always talking about if we can’t use it?” History tells us that disaster looms when great powers reach beyond supportable boundaries in search of glory or expansion. Cesar Augustus learned this when three of his prized legions were massacred during an adventurous attempt to conquer Germanic tribes in the Teutoburg Forest in 9 AD. "Give me back my legions!" was his lament to the Roman gods, but his actions following the defeat were more instructive. He consolidated his military and administrative positions throughout the empire around supportable locations and invested in infrastructure to include improving roads, mining, trade, and agricultural production. His reign represented a golden age for Rome, and its subsequent decline was hastened as his successors departed from his example into additional rounds of expansion. Classic conservatives today heed Augustus' lesson and seek to stabilize the United States’ alliance structure, strengthening established military positions, increasing trade and the rule of law while excluding those who would oppose Western values from the benefits inherent in participation.

Conservatives have much to offer in a public policy environment that offers few alternatives between the extreme bookends of lead-from-behind democratic expansion or neoisolationism and deal-making with authoritarian leaders. For far too long the conservative label has been picked up, used and abused by various political actors without much concern for the historic intellectual roots that have been the bedrock of the movement over the past three hundred years. Because of this, American national-security policy has undergone radical changes that threaten to destabilize the international environment that the nation has struggled to create in the shattered aftermath of World War II. Blood, treasure and lifetimes of effort were expended to create an environment where individuals, idea and commerce could thrive, lifting the standard of living and the quality of life for literally billions of people.

Today, through acts of commission and omission, the United States stands ready to walk away from the lessons and traditions of the past by offering equivalence to cultures that are opposed to the most sacred values of Western civilization while simultaneously attempting to forcibly implant that civilization in foreign soil that has not been fertilized by anything even remotely resembling the Enlightenment. This schizophrenia continues through attempts to expand American influence with a steadily shrinking military force. Actions must be taken to return to an equilibrium that attempts to maintain the United States’ leading position in the world while not undermining its essential role of supporting individual liberty and national self-determination. Conservatives have a leading role to play, but they must first seek to reestablish a connection with their intellectual base and differentiate themselves from the foreign and defense policies that have wrecked such havoc on the nation and the international system over the past generation. As the great conservative voice, Russell Kirk, reminds us, the United States must recognize that both permanence and change can be reconciled in vigorous society. We must gift to the future the greatness of its past.

Image: “M2A3 Bradley Fighting Vehicles road march back to their tactical assemble area after a situational training exercise lane as a part of Combined Resolve VI at Hohenfels, Germany May 16. Combined Resolve VI is a squadron-level decisive action rotation at the Joint Multinational Readiness Center May 5-25 that is training 5th Squadron, 7th Cavalry Regiment on cavalry and reconnaissance tasks. (Photo courtesy of Ralph Zwilling).”