America Is Never (Ever, Ever) Ending the War on Terror 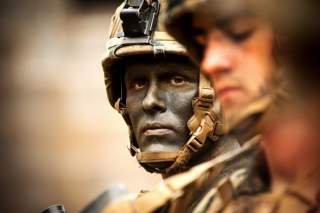 Over the past month, two members of the Obama administration have made public statements regarding different aspects of America’s ongoing “war on terror.” The second has (understandably) received much more public attention than the first, but the first says something more important about the ultimate course of that long struggle.

In the more recent of the two statements, President Obama spoke on Thursday about the deaths of two Western hostages, one American and one Italian. The hostages, Obama stated, were killed in “a U.S. counterterrorism operation targeting an al Qaeda compound in the Afghanistan-Pakistan border region” this January. The president said “I profoundly regret what happened” and apologized to the families of the victims on behalf of the U.S. government, while also defending the broader thrust of America’s targeted-killing campaign against Al Qaeda and other groups.

Obama’s remarks were the biggest story of the day, splashed across Page A1 of the New York Times. The public reaction to the president’s announcement divided along predictable lines. Those who generally support the methods that Washington is using to wage the war on terror pointed out that there are civilian casualties in any war. Senator Lindsey Graham, in his trademark style, offered the most blunt, straightforward defense:

Meanwhile, critics of the targeted-killing program contended that this incident put on display many of the existing flaws with Washington’s counterterrorism approach that they had previously described. They argued that the program results in far more civilian casualties than is typically acknowledged, and that when those victims are not Westerners, they are routinely ignored. They argued that a lack of good intelligence means that Washington often does not know whom it is killing in drone strikes. And they criticized the degree of secrecy associated with the program, noting, among other things, that the White House would not even say the word “drone” in its announcement. (For a more thorough analysis of the lack of transparency involved in the targeted-killing campaign, see Rachel Stohl’s essay in the current print issue of The National Interest.)

Obama said in his remarks that he had “directed a full review of what happened” in order to “identify the lessons that can be learned from this tragedy, and any changes that should be made.” The best bet is that very little, if anything, will change. As the Council on Foreign Relations’ Micah Zenko told the New York Times, “I predict that even this episode will have no effect.”

Why will nothing change? For a partial answer, one can turn to a different speech, given two weeks earlier to the American Society of International Law by Stephen Preston, the general counsel of the Defense Department. Preston’s speech was an explanation of the Obama administration’s thinking regarding “The Legal Framework for the United States’ Use of Military Force Since 9/11,” as the title of his address put it. Preston sought to do several things: to review the history of the legal authorizations behind the war on terror; to defend the legality of the U.S. military campaign against the Islamic State that has been under way since last August; to discuss the effects of the U.S. drawdown in Afghanistan; and to “look ahead to the legal framework for counterterrorism operations in the future.”

Various writers, particularly at the blogs Lawfare and Just Security, have picked apart different aspects of Preston’s speech. But its most important facet, as Harvard Law School’s Jack Goldsmith observes, was something that Preston did not say overtly. Rather, it was his tacit “acknowledgment that the Forever War is not ending anytime soon,” and that the Obama administration has effectively given up on its stated goal of repealing the 2001 Authorization for Use of Military Force (AUMF) and ending the war on terror.

This becomes clearer the more closely one looks at Preston’s words. In one section, he gave an accounting of the groups that the United States is currently using military force against under the auspices of the 2001 AUMF. The list reads as follows:

Those groups and individuals are: al-Qa’ida, the Taliban and certain other terrorist or insurgent groups in Afghanistan; al-Qa’ida in the Arabian Peninsula (AQAP) in Yemen; and individuals who are part of al-Qa’ida in Somalia and Libya. In addition, over the past year, we have conducted military operations under the 2001 AUMF against the Nusrah Front and, specifically, those members of al-Qa’ida referred to as the Khorasan Group in Syria. We have also resumed such operations against the group we fought in Iraq when it was known as al-Qa’ida in Iraq, which is now known as ISIL [emphasis added].

This is, to put it mildly, a long list. (And it’s not even a complete one; we still do not know who the “certain other terrorist or insurgent groups in Afghanistan” are or how many of them there are.) By the U.S. government’s own accounting, then, we are at war with an unspecified number of organizations across at least six countries. (Or seven countries, if one counts Pakistan, which Preston did not list but where the United States has conducted twenty-seven drone strikes since January 2014, according to the New America Foundation.)

Moreover, consider Preston’s remarks about just one of those countries, Afghanistan. Last December, Obama declared an end to the U.S. combat mission in Afghanistan, saying in a statement that “the longest war in American history is coming to a responsible conclusion.” Nevertheless, the United States has since delayed its planned drawdown of troops from Afghanistan, choosing to maintain roughly ten thousand troops in the country through the end of 2015. Preston was crystal-clear on this point: despite Obama’s remarks about having reached a “responsible conclusion” to the Afghan war, the United States will continue to use military force in that country as necessary. In his words, “There is no doubt that we remain in a state of armed conflict against the Taliban, al-Qa’ida and associated forces.”

Preston did repeat Obama’s oft-cited remark that the president’s goal is to “refine, and ultimately repeal, the AUMF’s mandate.” But, as Goldsmith pointed out, the way in which Preston interpreted this remark serves to show how hollow it is.

First, the Obama administration wants Congress to pass an AUMF that is specific to the Islamic State—even though it has already been using military force against that group for nine months. Then, after that happens, Preston said, the president is ready to engage with Congress “to tailor the authorities granted by the AUMF to better fit the current fight and the strategy going forward.” And finally—after Congress has both passed a new AUMF for the Islamic State and refined the 2001 legislation—there is no mention at all concerning when or how we ever actually get to the “repeal” stage. As Goldsmith writes, the bottom line is that “we are stuck with the 2001 AUMF for quite a while longer.”

In the end, the nub of the problem is based in policy rather than law. The Obama administration (rightly) does not want to pursue large-scale occupations of countries à la the Iraq War in the future. However, it also continues to believe that there are a large number of terrorist organizations across the world that it needs to use discrete military force against in order to protect Americans. Thus, it has continued its war on terror across at least seven countries. It is unclear whether these military efforts are achieving concrete gains on any of these fronts, or whether they are mostly killing a lot of easily replaceable, mid-level terrorists. Meanwhile, according to most polling, the drone program remains generally popular with the American public, so there is no real political pressure to scale it back. The result is that the White House is stuck in a war in which its efforts seem to make no or minimal progress toward winning, while simultaneously feeling like it can’t just end it and walk away.

There is no reason to think that this calculus will change when a new president takes over from Obama in January 2017. Hillary Clinton, the presumptive Democratic nominee, has supported virtually every American use of military force in the post-9/11 era and does not appear to disagree with Obama on any of the major substantive issues discussed above. And on the Republican side, a number of candidates’ primary criticism of the president’s foreign policy is that he has not been aggressive enough in his use of force abroad.

In May 2013, Michael Sheehan, then the assistant secretary of defense for special operations and low-intensity conflict, was asked at a Senate hearing how long he thought the war on terror would last. Sheehan replied that it would go on for “at least 10 to 20 years.” He was probably right.