America, Not Duterte, Failed the Philippines 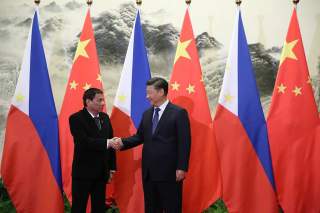 “I HAVE separated from them,” said Philippine president Rodrigo Duterte in October to his Chinese hosts, referring to America. “So I will be dependent on you for a long time.”

Within months of taking office, Duterte had accomplished the inconceivable, reorienting his country away from its only protector, the United States, and toward its only adversary, China. It is China that grabbed Mischief Reef from Manila in the first half of the 1990s and seized Scarborough Shoal in early 2012. The United States is the only nation pledged to defend the territorial integrity of the Philippines.

Some in the Washington policy community, upset with the flagrant display of disloyalty of the Philippine leader, said it was time to end the mutual-defense treaty with Manila. Yet the fundamental issue is not the firebrand Duterte. The issue is Washington. Washington did much to push Duterte away by failing to honor moral, if not legal, obligations to its long-standing ally. The Philippine president did not have to provoke America as he did in October during his trip to Beijing. But his words, though extreme, were nonetheless a predictable outcome of a misguided U.S. policy. It is unlikely that Duterte is spouting off against Washington to get a better deal, playing the Americans off the Chinese and Russians.

His many outbursts against the United States, in fact, look genuine, rooted in a century of Philippine nationalism and mistrust. Duterte was schooled in anti-Americanism from an early age. His grandmother, a Muslim, taught him that the United States was guilty of grave crimes during its colonization of the Philippines. To this day, he refers to the 1906 massacre of the Muslim Moros and believes Washington has not atoned for this particular instance of brutality or, more generally, the torture of Filipinos and the subjugation of his country. To make matters worse, Duterte then learned politics in university in the 1960s from Jose Maria Sison, the founder of the Communist Party of the Philippines. The president now proudly calls himself a leftist.

All these factors mean that America, in Duterte’s eyes, can never do anything right. He still rails about being denied a U.S. visa early last decade. Moreover, he won’t stop talking about what he perceives to be a violation of Philippine sovereignty, the mysterious disappearance of “treasure hunter” Michael Meiring from Davao City in May 2002 after the detonation of a bomb in his hotel room. Duterte, the mayor of that city at the time, believes that Meiring was whisked out of the country by the Central Intelligence Agency.

So not too many Filipinos were taken aback when Duterte slung a homophobic slur at then ambassador Philip Goldberg in August and, by some accounts, directed an equally derogatory comment in the direction of President Barack Obama the following month. As a close aide to Duterte characterized his virulent anti-Americanism, “It’s policy, personal, historical, ideological, et cetera, combined.”

Although Duterte’s views appear warped by prejudice, he nonetheless has good reason to complain about Washington, which despite its mutual-defense pact has not protected his country adequately. Manila has unsuccessfully attempted, since at least the late 1980s, to compel the United States to confirm that the treaty, signed in 1951 and ratified the following year, covers the reefs, rocks, shoals, atolls and islets Manila claims—and China covets—in the West Philippine Sea.

BEIJING, WHICH calls that expanse by its more common name, the South China Sea, claims the same features. Its official maps contain nine, and sometimes ten, dashes forming an area called the “cow’s tongue.” Inside the tongue-shaped area is about 85 percent of that critical body of water, and Beijing claims sovereignty over every feature there. Moreover, official Chinese state media has recently used language directly suggesting that all the waters inside the dashes are sovereign as well. Beijing now has a term for all this: “blue national soil.”

The United States does not take sides on the many South China Sea territorial disputes—China’s claims also conflict with those of Taiwan, Malaysia, Brunei, Indonesia and Vietnam—but Washington does insist on peaceful resolution. Beijing’s actions, however, have been anything but peaceful. For instance, it seized Mischief Reef in a series of acts beginning in 1994. The feature is far closer to the Philippines than other claimants—Hanoi and Taipei as well as Beijing—but Washington did nothing to reverse the Chinese action. American policymakers at the time adopted a serves-them-right attitude because Manila, gripped by one of its bouts of nationalistic fervor, had just ejected the U.S. Navy from its facilities in Subic Bay and the U.S. Air Force from the nearby Clark Air Base.

In early 2012, China moved again. After the Philippines detained Chinese poachers taking endangered coral, giant clams, sea turtles and baby sharks around Scarborough Shoal, Chinese vessels swarmed the feature, which sits only 124 nautical miles from the main Philippine island of Luzon and about 550 nautical miles from China. The shoal—just rocks above the waterline—is strategic because it guards the mouths to Manila and Subic Bays.

China at the strategic speck employed its “cabbage strategy.” By wrapping the shoal “layer by layer like a cabbage” with small vessels, Maj. Gen. Zhang Zhaozhong explained, Beijing could exclude others. In June of that year, Washington brokered an agreement for both sides to withdraw their craft, but only Manila complied. Beijing has been in firm control of the feature since then.

Washington policymakers, despite the seizure, decided to let the matter drop. As Doug Bandow of the Cato Institute suggested, no American president could convince the public to defend “uninhabited rocks of no intrinsic importance.” And as a “senior U.S. military official” told the Washington Post in 2012,

I don’t think that we’d allow the U.S. to get dragged into a conflict over fish or over a rock. Having allies that we have defense treaties with, not allowing them to drag us into a situation over a rock dispute, is something I think we’re pretty all well-aligned on.

In short, the United States did nothing to hold China accountable for its deception. By doing nothing, however, America empowered the most belligerent elements in the Chinese political system by showing everybody else in Beijing that aggression works.

Months after taking control of Scarborough, an emboldened Beijing pressed forward by rapidly stepping up incursions around the Senkaku Islands in the East China Sea, claimed by China but under the control of Japan. And Beijing continued to apply pressure in the South China Sea, especially at Second Thomas Shoal, like Scarborough, thought to be part of the Philippines. At Second Thomas, Manila in 1999 grounded the Sierra Madre, a World War II–era hospital ship, to mark the shoal, and left a handful of marines on board. China, once again employing cabbage tactics, used small craft to surround the tiny Philippine garrison. In March 2014, Chinese craft escalated by turning back two of Manila’s resupply vessels, cutting off the troops stationed on the rusting hulk. “For fifteen years we have conducted regular resupply missions and personnel rotation without interference from China,” said Philippine Department of Foreign Affairs spokesman Raul Hernandez at the time.

THERE ARE various theories why Beijing decided to act at that moment. Ernest Bower of the Center for Strategic and International Studies told Reuters that the belligerent Chinese move could have been the result of Beijing’s perception of American weakness in Syria and Ukraine. Yet there is a far more direct explanation. The Chinese knew the United States had remained idle when they grabbed the much-closer Scarborough, even though they had brazenly repudiated the agreement Washington had brokered with themselves and Manila.

In early 2014, Beijing began another provocative initiative by island building—cementing over coral—in the Spratly chain of islands in the southern portion of the South China Sea, creating more than 3,200 acres on and around seven reefs, rocks, shoals and specks. Beijing, most notably, rebuilt Fiery Cross Reef, also claimed by Manila as well as Taipei and Hanoi. The commander of U.S. forces in the Pacific, Adm. Harry Harris, called the newly created features China’s “great wall of sand.”

Moreover, the Chinese have continued provocative conduct. In February 2016, Chinese craft harassed a Philippine navy vessel not far from Half Moon Shoal, just sixty nautical miles south of Palawan, one of the main Philippine islands. And at about the same time, Beijing made an apparent move on uninhabited Jackson Atoll, which also sits off Palawan. Chinese vessels, following the Scarborough and Second Thomas playbooks, had for weeks crowded around the feature, which Beijing calls Wufang Jiao. China’s Foreign Ministry said Chinese craft had worked to free a grounded foreign vessel, a Manila-based fishing boat.

Yet the action was not a temporary effort to aid navigation, as Beijing had claimed. Chinese vessels, both white-hulled (coast guard) and gray-hulled (navy) had swarmed the feature and excluded Filipinos from their traditional fishing grounds. The Philippine Star, a Manila newspaper, called the Chinese ships a “menacing presence.” Eugenio Bito-onon Jr., a mayor in the area, said China’s ships had loitered around the atoll for more than a month. “We can’t enter the area anymore,” an unidentified Philippine fisherman told the Star. Up to five gray and white hulls had been stationed in the area “at any one time.”