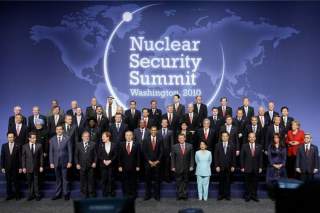 There are hearings in Congress this week dealing with two agreements that set the terms for nuclear cooperation with China and South Korea. They could well bear upon our next strategic surprise: plutonium leaking from the energy sector of some country and ending up in a terrorist’s nuclear weapon.

As the Obama administration frets over Russia’s apparent decision not to attend next year’s Nuclear Security Summit, the real issue is the U.S. failure to address the threat posed by growing stockpiles of plutonium. Indeed, the president’s approach to nuclear security may well make matters worse.

Unless something unexpected happens, a nuclear cooperation agreement between the United States and China will come into force in the next few months. The agreement has a prior consent clause permitting China to reprocess spent fuel that arises from U.S. nuclear cooperation without asking Washington's permission first. Although this will allow China access to thousands of kilograms of plutonium contained in the spent fuel from its nuclear energy program, it will only add to the thousands it has already been producing in its nuclear weapons program. Since China has nuclear weapons, some will not care about this, but others, concerned about nuclear security and the increased risk of nuclear terrorism, care a lot about the intrinsic importance of so much more plutonium being separated from spent fuel every year, and the precedent it sets for other countries in Northeast Asia.

At the same time, we are learning that a deal struck between China and France will culminate in the construction of a commercial reprocessing facility in China so that the Chinese will in fact be able to separate tons of plutonium from their spent nuclear fuel each year to make new fuel for shipment to nuclear reactors around their country.

The United States has posed no objection to these plans to separate large quantities of plutonium and transport it over great distances, indeed it has facilitated it. Since access to fissile material is considered "the long pole in the tent" among obstacles to be overcome by terrorists intent on making an IND—an improvised nuclear device—one might wonder why the president, who has called nuclear terrorism "the most immediate and extreme threat to global security," has adopted this posture.

It is particularly strange since the president has also wanted to make nuclear security one of his legacies. In 2010, Washington hosted the first Nuclear Security Summit, bringing together the heads of state of thirty-eight countries to extract commitments to better secure their fissile material. Two years later, with the United States pushing the agenda, the summit met in Seoul, and last year it met again in The Hague. A fourth and culminating summit—the one Russia says it will skip—is now planned for March of next year in Chicago.

Ironically, we recently learned that also in March of next year, Japan plans to begin operating its new reprocessing plant. If it runs according to design, the plant will turn out more than six tons of plutonium every year. That's enough fissile material moving around Japan to make more than a thousand nuclear weapons annually. The Obama administration has posed no objection. Need we ask, "what could go wrong?"

At the same time, the administration worked hard and successfully to keep South Korea from following the reprocessing-plutonium separation course when it was negotiating its agreement for nuclear cooperation with the United States. One must wonder how long Seoul will accept abstinence if its neighbors, China, Japan and even North Korea, proceed with reprocessing.

The problem now is clarity and honesty. Both require that we acknowledge the continuing debate over whether and when it is economically, technically and politically prudent to "close the nuclear fuel cycle," that is, to reprocess spent nuclear fuel rather than store it for decades or centuries, or dispose of it permanently as waste. That debate has raged for forty years, at least since the Ford administration, when serious opposition arose to reprocessing and separating plutonium for any purpose—whether to use the plutonium to fuel existing power reactors or new breeder reactors and thus conserve uranium, or to allow better management of radioactive waste.

We addressed that question a few years ago, though clearly did not dispose of it, when a Blue Ribbon Commission on America’s Nuclear Future, requested by the president and charged by the secretary of energy, concluded that it would be premature for the United States to commit to closing the nuclear fuel cycle, and that we should for now develop consolidated spent fuel storage and geologic disposal facilities.

While this is an extremely complicated issue, it would not be unfair to note that billions of dollars are at stake for commercial interests in every country involved, and so one should not expect that a single nation's interest, never mind the global public interest in peace and security, to naturally emerge from the arguments of advocates in the nuclear industry or utilities. We might hope though, that government would bring clarity and honesty to the issue.  Unfortunately, that is not what we have.

Instead, those who profess deep interest in preventing the worst horror most of us can imagine —a nuclear terrorist attack on one or more of our cities—focus on securing fissile material rather than halting the tsunami of rising plutonium stocks, much of them in motion. Nuclear security is not a bad objective, of course; it’s actually essential. But better locks are not what is most needed now, especially if they serve to legitimize the accumulation of ever larger quantities of plutonium by creating a false sense of security. Most important, the enthusiasm for yet another nuclear security summit is distracting the public from the essential debate, the one about the wisdom of continuing to create more plutonium, the one that is supposed to be based on clarity and honesty.

What the world needs now is a hard look at those decisions being made in Northeast Asia, with the acquiescence and participation of others, to separate ever larger quantities of plutonium in the years ahead. American leadership in doing that would be welcome too.

Robert L. Gallucci is the Distinguished Professor in the Practice of Diplomacy in the School of Foreign Service at Georgetown University. Previously, he was president of the John D. and Catherine T. MacArthur Foundation and Dean of the School of Foreign Service at Georgetown University. He has also been Ambassador-at-Large and Special Envoy for the U.S. State Department, where he dealt with the threats posed by the proliferation of ballistic missiles and weapons of mass destruction. He was chief U.S. negotiator during the North Korean nuclear crisis of 1994. He was also Assistant Secretary of State for Political Military Affairs, and served as the Deputy Executive Chairman of the UN Special Commission overseeing the disarmament of Iraq after the first Gulf War. He earned his Bachelor’s degree at the State University of New York at Stony Brook and his Master’s and Doctoral degrees at Brandeis University.