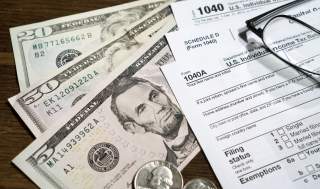 Last week when the White House unveiled its long-awaited proposal for tax cuts, more than a few observers noted that President Donald Trump’s “new” plan looks a lot like the promises he made during his campaign. Capital Economics described the proposal:

“[It has] deep cuts to corporate and individual tax rates. Even with dynamic scoring, however, the old plan was expected to increase the Federal budget deficit by $7 trillion over the next decade. For that reason alone, this plan is never getting approved by Congress, particularly not through a budget reconciliation that requires ten-year revenue neutrality.”

So in many respects, the Trump tax-cut proposal was dead on arrival. The plan neither aligned with the political trends in Washington, DC nor did the numbers add up to anything even remotely in the realm of the possible in terms of the federal budget process. “The market expected a document outlining the administration’s one-hundred-thousand-foot view on tax reform,” notes CompassPointLLC in Washington, “but instead was given a view from the space station.”

Of note, the tax plan did not include any reference to the tax on imports that President Trump has threatened to impose nor did it mention infrastructure spending, another Trump campaign promise that has gone largely unfulfilled since he took office.

“Yesterday, we learned President Trump wants to slash the corporate tax rate, even though corporations already dodge most of their tax responsibilities while making record profits,” Frank Clemente, executive director of the liberal Americans for Tax Fairness, told the New York Times. “Today, we find out it’s even worse. In trying to slash taxes for ‘pass through’ business entities, Trump is seeking to dramatically reduce his own tax bill.”

The idea advanced by Trump that the tax rate for all small proprietorships should fall to 15 percent caught some observers by surprise. Such small businesses where the individual pays taxes on business profits on their individual taxes are treated as pass throughs for state and federal tax purposes, but also include many professionals and financial firms—including real estate developers.

Most observers dismissed the announcement of the tax plan as a nonevent. Politico noted that the widely held view on Wall Street now is that Congress will only be able to manage a modest cut in the corporate rate funded at least in part with revenue from a repatriation of foreign earnings currently held abroad. But regarding the specific idea of tax repatriation from offshore, more interesting than what is in the Trump tax proposal is what is not included regarding hidden corporate income.

While Trump sounded a decidedly populist theme during the 2016 presidential campaign, he has not followed through on some obvious avenues of tax evasion—namely offshore transactions routinely used by large U.S. corporations to shelter income from taxation. Ending the offshore tax game could not only fund a massive infrastructure spending program but it could also deal with a number of other fiscal issues festering in Washington.

Specifically, Trump could radically change the financial fortunes of the United States by ending the practice of concealing income offshore via sham financial transactions—dealings that are remarkably similar to the off-balance sheet scams that almost destroyed the U.S. financial system in 2008. Truth is, the United States can still do lots of infrastructure projects based merely on money that the Treasury will collect by ending the abuse of offshore tax shelters.

How can the IRS collect the trillions of dollars hidden offshore? By following through on the court precedents in cases such as Overseas Shipholding Group, General Electric’s “Castle Harbour” transaction and Dow Chemical’s “Chemtech” canard, which was struck down by the U.S. Court of Appeals last year. The Supreme Court declined to hear an appeal of the case this past January.

We are now twenty-five years into a massive tax scam based on fraudulently applying financial asset securitization techniques to operating revenues and taxation of major businesses. Simply stated, the U.S. firm pretends to “sell” assets to a foreign company, but then allocates a disproportionate share of its income to the transaction, resulting in lower taxes for the U.S. parent company.

In the Dow case, the courts agreed with the Internal Revenue Service that the company did not deserve the tax deductions previously claimed, and also imposed a 20 percent penalty for negligence and substantial understatement of taxes. As one learned tax lawyer opined: “Operating revenues cannot be re-allocated except in direct proportions whereby taxable income allocations balance over time.”

What many U.S. companies have done since the early 1990s using offshore “sales” transactions has been fraud, plain and simple. The IRS is now slowly (but absolutely certainly) catching all of them, as was shown in the 2012 bankruptcy of Overseas Shipholding Group. The IRS disallowed a number of offshore transactions, increased the company’s tax bill astronomically, and the company filed bankruptcy. Note: There is no time limit for the IRS to impose a “Final Partnership Allocation Adjustment” or to pursue civil fraud claims in such cases.

The $10 trillion or so siphoned off from U.S. tax rolls since the 1990s via the fraudulent offshore parking of profits could sustain today's levels of U.S. government deficits for quite a while. And President Trump could take credit for fixing the U.S. tax system—if he had the courage and imagination to do so. But members of Congress in both parties know they cannot touch that political “third rail” by letting the public know that the members of the S&P 500 have literally “stolen” $10 trillion via offshore tax transactions over the past thirty years.

Anyone that thinks the concept of shifting otherwise recognized income to lower taxed entities using a “Special Limited Investment Partnership” may survive after the Dow case should read the IRS petition explaining the reasoning of the lower court position to the U.S. Supreme Court. It is dated Dec. 7, 2016, and found at 2016 U. S. S. Ct. Briefs 4503. And the IRS is just getting started.

Of course, Trump the populist could announce that his is going to lower personal tax rates and task the IRS to focus all of its resources on finding corporate tax evasion, like that of General Electric and Dow Chemical Co. But Trump the businessman dares not go down that road because he himself has made use of offshore transactions to reduce taxes. Specifically, when Trump’s casino properties went through bankruptcy in the 1990s, he did not file bankruptcy himself. Instead he used a similar partnership structure to that Dow Chemical Co. used to transfer the corporate “equity” of his casinos to lenders, claiming that excused him from recognizing the losses of the lenders as “debt forgiveness income.”

Trump’s tax lawyers have long served as co-counsel with one of the leading tax litigation firms, including to challenge the IRS’s “Final Partnership Allocation Adjustment” for a special limited investment partnership that Goldman Sachs helped Dow Chemical create. When the U.S. Supreme Court refused to consider Dow’s application for review of a lower Court’s holding that the transaction was a sham, tax lawyers around the world shuddered in dread.

Each argument President Trump and his legal team have previously asserted to support avoidance of “forgiveness income” in the 1990s was made by counsel in the briefs and petitions filed in the Dow case. Given the Court’s decision, many companies (as well as lawyers and audit firms) will find that, when discovered, they have no further recourse than to seek whatever deal the IRS will give them. And most of corporate America does not yet suspect the peril that faces them when the IRS decides to review their past offshore transactions.

So don’t be disappointed that the Trump tax-cut proposal lacked substance and included numbers that make no sense at all. Rather, be sad, America, that the man sitting in the White House cannot lead the national discussion on the key issue in taxation, namely the abuse of offshore tax transactions by the largest American corporations. The issue is not merely repatriation, but adjusting corporate taxes by trillions of dollars, in some cases going back decades, to accurately reflect U.S. law and force these companies to pay their fair share.

Christopher Whalen is Chairman of Whalen Global Advisors LLC in New York. He is the author of Inflated: How Money and Debt Built the American Dream (Wiley, 2010), the coauthor, with Frederick Feldkamp, of Financial Stability: Fraud, Confidence, and the Wealth of Nations (Wiley, 2014), and author of  Ford Men: From Inspiration to Enterprise (Laissez Faire, 2017) His website is www.rcwhalen.com.