America is Right to Leave the UN Human Rights Council 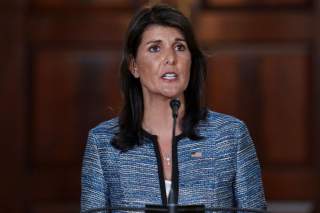 Most coverage of President Trump’s decision to leave the United Nations Human Rights Council (HRC) characterizes it as an example of the administration’s hostility to the international community. Nothing could be farther from the truth.

The UN created the council in 2006 to replace the Commission on Human Rights whose reputation had fallen to the point that even former UN Secretary-General Kofi Annan acknowledged that “ the Commission’s declining credibility has cast a shadow on the reputation of the United Nations system as a whole.” In negotiations to create the council, the Bush administration fought hard to establish stronger membership criteria and other standards to make sure it did not replicate the weaknesses of the commission.

Unfortunately, the other member states rejected these proposals. The United States consequently voted against the resolution establishing the HRC and declined to run for a seat on the council. As Ambassador John Bolton noted at the time, “We did not have sufficient confidence in this text to be able to say that the HRC would be better than its predecessor.”

This conclusion was prophetic. From the beginning, the council exhibited blatant bias against Israel, included human-rights abusers among its membership, and was unable to confront serious human-rights abuses in powerful or influential states. In other words, the HRC exhibited the very same flaws that discredited the commission.

Despite this record, the Obama administration joined the council in 2009 arguing that the United States could fix the council by working from within. The record debunks that notion.

According to UN Watch, the council had adopted 169 condemnatory resolutions on countries as of the end of May. Of those, nearly half (47 percent) focused on Israel.

The council’s fixation on Israel is absurd. By spending exponentially more time on Israel than on North Korea or Syria, the council only underscores the politicization and bias of its agenda.

Nobody is proposing that Israel should be immune from scrutiny or criticism. On the contrary, a credible council must be able and willing to examine the human rights practices of each nation. However, the agenda and procedures of the HRC single out Israel for different treatment from all other nations, which is conclusive evidence of bias.

In contrast to this obsessive focus on Israel, the council is notably incurious about the human-rights situations in some of the world’s most oppressive countries. For instance, the HRC has never passed a condemnatory resolution on China, Cuba, Russia, Saudi Arabia, or Zimbabwe despite their terrible records of, respectively, religious persecution, punishment of political dissent, hostility to freedom of the press, unequal rights for women, and use of force against civil society and government opponents.

Currently, fourteen of the forty-seven members of the council (including Burundi, China, Cuba and Venezuela) are ranked “not free” by Freedom House. This is the highest number of “not free” countries in council history, indicating that the majority of the world’s governments see no problem with electing human-rights violators to the UN’s highest human-rights body.

Even defenders of the Human Rights Council acknowledge this problem. As noted by the executive director of Human Rights Watch, Kenneth Roth, “[T]he Trump administration is correct that [membership] is suboptimal . . . To make matters worse, some abusive governments try to join the council in the hope of protecting themselves and their kind from condemnation.”

How does this work in practice? Repressive countries line up to praise each other, interrupt criticism from NGOs, and deflect attention by attacking countries like the United States for criticizing their human-rights records.

One can also look at the Universal Periodic Review. The UPR is a process under which every country undergoes a review of its human-rights practices and receives recommendations for improvement. According to UPR Info, the country that has received the most recommendations is the United States. That is correct—the HRC process has concluded that the United States is more in need of human-rights advice than Cuba, Iran and Sudan. Israel is also in the top twenty-five, naturally, right ahead of China.

Another example is how many times human-rights experts visit particular countries. Since the council was established in 2006, the forty-four human-rights experts for thematic mandates (not to be confused with the twelve experts charged with monitoring specific countries) have conducted over six hundred visits to more than 160 different countries and territories. The United States was, by far, the most visited country.

Clearly, the HRC is not allocating its time and effort optimally when the United States and Israel dominate its agenda and focus.

Who Really Wants the Human Rights Council to Work?

When it became clear that U.S. withdrawal from the HRC was a possibility, advocates urged the United States to remain and fight for reform from within the body. That, they argued, would be the best way to prevent noncompetitive HRC elections and eliminate the structural bias against Israel.

Thus, the facts that the council is flawed, inconsistent, biased against Israel, and beset by questionable membership are not in dispute.

Unfortunately, most governments either prefer a weak, biased council or are unwilling to make the effort necessary to reform it. This is not a recent development in response to the Trump administration. The Obama administration met similar resistance when it proposed reforms at the mandatory 2011 review of the council.

Nonetheless, over the past year, the United States has tried again. Led by Ambassador Nikki Haley and strongly supported by U.S. diplomats in Geneva, New York, Washington and around the world, the United States has engaged bilaterally and multilaterally to promote reforms to address anti-Israel bias, membership quality, and improve the council’s efficiency.

They have been met with disinterest and hostility. Even European governments and human-rights groups have opposed the U.S. reform effort out of fear that countries hostile to human rights might seize the opportunity to weaken the council.

This is a self-fulfilling prophesy that condemns the council to its current gravely disappointing status quo. Worse, as long as this fear exists, any future reform effort will be stillborn.

The Trump administration is right to ask why the United States should expend so much time, effort and influence in making council resolutions and actions slightly less harmful and biased—often times unsuccessfully—when the other member states are unwilling to invest similar time and effort in actually improving the council itself.

Leaving the council does not mean that the United States is abandoning its support for human rights. Other avenues exist to promote human rights.

Indeed, the United States could more prominently support human rights in its foreign aid programs more generally. The Congressional Research Service reports that, in fiscal year 2016, the United States allocated four times as much assistance to environmental issues as it did to promote the rule of law and human rights.

Likewise, the United States could expand its engagement and support for foreign bodies like the Organization for Security and Co-operation in Europe and for domestic institutions like the National Endowment for Democracy, the International Republican Institute, and the National Democratic Institute that monitor elections and promote human rights.

Those dismissing the decision to withdraw from the Human Rights Council as an example of the Trump administration’s rejection of multilateral engagement miss the target. The administration could have left the council any time in the past eighteen months, but it did not. Instead, it sought to work within the UN to fix the council. Only when it proved futile did the United States pull back.

Sadly, the United States seems to be the only government that seriously wants the Human Rights Council to promote universal respect and protection of human rights and fundamental freedoms in a fair and equal manner.

The council has proved to be a flawed, biased, often ineffective instrument—despite U.S. membership and engagement. The Trump administration recognized, rightly, that staying in the council would at best ensure continued bias, selectivity and disappointment. Worse, it would implicitly endorse those outcomes.

Those condemning the United States for leaving should redirect their ire at the governments that refused to support U.S. efforts to fix the council’s manifest flaws—flaws that, like those of the Commission before it, sully the reputation of the United Nations.

Image: U.S. Ambassador to the United Nations Nikki Haley delivers remarks to the press together with U.S. Secretary of State Mike Pompeo (not pictured), announcing the U.S.'s withdrawal from the U.N's Human Rights Council at the Department of State in Washington, U.S., June 19, 2018. REUTERS/Toya Sarno Jordan