America Is Right to Reduce Its Troops in Africa 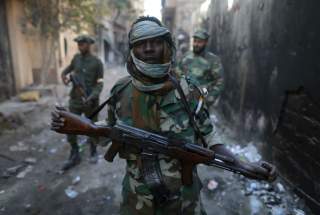 Gen. Thomas Waldhauser, commander of the United States Africa Command (AFRICOM), recently testified before the House Armed Services Committee that America needs higher level political engagement in Africa and not more troops. His testimony was in response to skepticism about Pentagon’s plan to cut 10 percent of U.S. troops in Africa—seven-hundred of the seven-thousand-two-hundred stationed on the continent—by June 2020.

Most critics of the plan are worried that the cut will affect ongoing U.S. security efforts in Africa and potentially give al-Shabab and Islamic State affiliate groups the chance to reorganize. Others believe America’s gradual and eventual withdrawal from Africa will allow China and Russia the opportunity to explore more military opportunities on the continent.

But General Waldhauser is right. The best way to promote American interest and help secure Africa is through collaboration with the continent’s leadership in exploring non-military solutions to insecurity, especially in trade policies.

Congress’ skepticism is understandable. The threat of Islamic extremism in Africa concerns America, specifically in places where groups affiliated with the Islamic State are active. But Waldhauser’s testimony shows that Libya and Somalia are the only countries where extremists pose clear threats to the U.S. homeland. Besides, AFRICOM is well in-charge in both countries and doesn’t plan to significantly cut troops there.

Waldhauser also told the committee that he has adequate forces under his command and that special operations in both countries will not be affected; Congress should trust his judgment. America’s strategy has changed in some areas from ground operations to advising forces remotely from battalion headquarters. The United States cannot continue to spend so much on remaining in Africa when there are well-trained local forces. Washington has spent a lot of taxpayers’ money on training African forces for years, and as Waldhauser told Congress, they can now operate on their own.

If the commander on the ground claims African troops are ready, and no African military leader is saying otherwise, why should anyone doubt their readiness? African governments have to lead the fight to protect their own countries. Prolonged U.S. military leadership on the continent is a huge disincentive to Africa’s self-defense responsibility. These leaders will not invest in their own security as appropriate if the United States always present itself as a savior.

Regardless of the sophistication of AFRICOM, it cannot give a substitute for local knowledge. Only local forces will have the complex knowledge required to achieve success in this kind of warfare. The circumstances surrounding the death of four U.S. Green Berets in an ambush in Niger back in 2017 is one sad proof of why local armies must fight local battles.

A military inquiry into the incident revealed that the U.S. base was unprepared for the mission and that officers had “mischaracterized” the mission in the planning document filed before the Green Berets departed. This miscalculation and the unpreparedness were fatal mistakes by AFRICOM that should never happen again.

Congress should know that there cannot be sufficient training to fully prepare American forces for the tricky topography of the Sahel, which covers a large portion of the areas U.S. forces are actively engaged in Africa. The region is complex and requires deep knowledge of the woodlands and plateaus to navigate successfully. The U.S.-trained African forces will be more prepared to lead engagements in these areas.

Also, American forces cannot equally remain in Africa because of Washington’s interest in countering the growing influence of Russia and China on the continent.

China and Russia are obviously increasing their investments in Africa for imperial reasons, and they will do anything to protect these investments. For instance, although America’s foreign direct investment stock in Africa still overweighs that of China, Beijing’s financial influence is growing fast through the Belt and Road Initiative (BRI).

Whenever America realizes the need to prioritize non-military engagements in Africa, it will have to offer a compelling alternative to a continent already deeply involved in China’s manipulative BRI. America should invest more in Africa’s urgent infrastructural needs—which is China’s main area of strength on the continent—and strengthen diplomatic ties with key players like South Africa, Nigeria, and Kenya. China’s strategy is already opening up military gains in places where Washington had influence.

Just last year, China opened its first military base outside of China in Djibouti, the same country where most U.S. troops in Africa are currently stationed. They are also exploring similar opportunities in Tanzania and elsewhere. America shouldn’t make the mistake of assuming that only equal U.S. military presence in Africa will keep China in check. It should instead counter Beijing’s strategy with “high-level visits and engagements” to explore more trade and investment opportunities as Waldhauser advised.

African leaders are only allowing Chinese forces at their shore because of what they are gaining from the shady trade and investment agreements they signed with China. Alternative American agreements with these leaders will increase Africa’s options. Economic competition is the most effective and mutually beneficial way to keep China out without militarizing Africa. It will be a good policy for the Trump administration to consider in addition to its New Africa Strategy after over a decade of making counter-insurgency the priority under the Obama and Bush administrations.

Trade and respectful diplomatic relations will reassure Africa that the United States, unlike China and Russia, truly cares about the continent’s overall development. It will also show that America isn’t just in Africa to protect its national security and economic interests.

Congress should allow Pentagon to proceed with this gradual withdrawal. There are more pressing security threats that warrant the focus of the U.S. military than Africa at the moment, and Africa should be more responsible for its own security.

Ibrahim B. Anoba is managing editor at African Liberty and fellow at America’s Future Foundation. He writes for Young Voices and can be found on Twitter @Ibrahim_Anoba