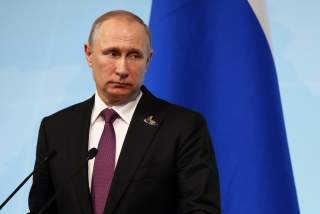 The United States and Russia, apart perhaps from their respective presidents, are very much at loggerheads—over Syria, Ukraine, Crimea, Russia’s violations of the Intermediate-Range Nuclear Forces Treaty, and its meddling in European elections, in America’s 2016 presidential election and, perhaps, in some American statewide elections as well. Yet the two countries also have a host of common interests: combating terrorism generally and defeating ISIS; maintaining a stable Middle East; preventing Iran from developing a nuclear weapon and North Korea from actually firing one; and preserving a strategic nuclear balance that has endured for more than half a century. How, then, to overcome the differences in order to foster cooperation to underpin those common interests?

The first order of business between the two countries may be the hardest. President Trump must publicly protest Russian attempts to undermine the 2016 election, while President Putin needs both to acknowledge Russia’s bad behavior and undertake never to repeat it. Even if his promise is empty, it is still one he must make.

Neither president is inclined to address this issue in public. Trump’s apparent inability personally to own up to reality simply prompts more suspicion of his motives, or worse. Likewise, Putin’s refusal to acknowledge Russia’s misdeeds only intensifies congressional efforts to impose more sanctions on his country. Trump may have raised the issue in private when he met Putin on the sidelines of the G-20 conference, as Secretary of State Rex Tillerson and, later, the president himself reported. That, however, is not good enough. As for Putin, he does not appear to have even obliquely acknowledged what Russia did. Even if he had, that still would have been insufficient to enable the two countries to work together.

And there is indeed much that they could do together, if only Washington were as clear about its objectives as Moscow. The United States has been ramping up its anti-ISIS operations in Syria. It has given no indication of how far it will go in that regard. It must do so, and at the same time accelerate whatever efforts it may already have undertaken to ensure deconfliction with Russian forces in the air and on the ground. Should a deconfliction agreement be achieved, the next step could be joint patrols of safe zones, to enable refugees to return safely to their homeland.

Russia, no doubt, will insist that no attempt be made to unseat Bashar al-Assad. Washington has implicitly signaled that it has no intention of doing so, but it must insist that Russia take all necessary steps to prevent him from ever again using chemical weapons against his own people or anyone else. Moreover, if the United States is formally to desist from advocating Assad’s overthrow—and, as a consequence, cease providing support to the rebels that would enable them to defend themselves against his forces—Russia must do all it can to pressure Iran to withdraw its militias from Syria. In addition, it must work with Washington, Jordan and Israel to foil Iran’s efforts to have a Shia-dominated land line of commutation to the Mediterranean Sea.

The Obama administration vigorously protested Russia’s seizure of Crimea and intervention in Ukraine, but did little to support Kiev in any material way, other than imposing sanctions—which have not prevented Moscow from maintaining its position in both places. The Trump administration has done even less. Washington may not be able to do much about Crimea, but it could reach an understanding with Moscow regarding Ukraine. Washington should insist that Russia withdraw its forces and cease to support pro-Moscow militias. For its part, the United States could guarantee that it would veto any Ukrainian attempt to join NATO.

Finally, Washington should make it clear to Russia that it will continue to build up its forces in Europe as long as Moscow fails to guarantee that it will stop its violations of the INF treaty, and act upon that guarantee. Should Russia do so, Washington for its part will assure Moscow that NATO will not permanently base forces in eastern Europe.

None of the foregoing is beyond the realm of the possible; even the majority of Congress, which continues to push for more sanctions against Russia, could well go along with agreements that stabilize Syria, Ukraine and the European balance, even as it acts to frustrate Tehran’s hegemonic ambitions. But first, the two presidents must publicly come clean regarding the 2016 election campaign. Otherwise, there will be no breakthroughs, and Cold War Two will continue with no end in sight.