America Should Not Cheer on an India-China Fight 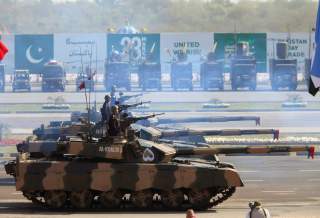 Tensions have been building on the Himalayan frontier that separates China and India, even as a new round of political instability roils Pakistan. A recent skirmish in Kashmir, moreover, raises the stark possibility of a South Asian conflagration that involves not just two nuclear powers, but actually three (or even four). Some strategists in Washington are gleeful that Beijing confronts yet another brushfire on its flank—the more so to dissipate the energies of the resurgent Middle Kingdom. Indeed, it has long been fashionable in Washington to advocate for stirring up trouble on China’s unruly western borders in order to contain any ambitions that China might have on its eastern or maritime flank. However, such viewpoints are appallingly short sighted.

We have learned before, perhaps more than once, that playing geopolitics in South and Central Asia can have disastrous consequences for U.S. national security. Advocates for the ever deepening U.S.-Indian strategic partnership have long been in ascendance in the Pentagon. The recent Malabar exercise has become a potent symbol of New Delhi’s prominent role alongside Tokyo and Washington as the “Three Musketeers” that will keep the fire-breathing Chinese dragon in check. Not surprisingly, Chinese commentators interpreted the Malabar exercise, yet again, as aimed squarely at Beijing. Meanwhile, the new trend in Washington is increasingly to blame Pakistan for all woes in Afghanistan. Increasingly, it looks as if South Asia will be subsumed into the larger superpower struggle—a rather familiar and dreadful scenario from the Cold War. Such an outcome is hardly good for South Asians. Nor does it accord with U.S. national interest either.

Rather than opposing the spread of Chinese influence in South Asia at every turn, Washington and New Delhi should instead objectively study the details of China-Pakistan engagement and consider how these ties, for the most part, actually benefit global security. This is not the first time that this Dragon Eye column has considered the unfolding strategic situation in the Indian Ocean, but this edition uses a cover spring 2017 story from the influential Chinese magazine Caijing [财经/Finance and Economics] about the mystery port of Gwadar [瓜达尔港] that China has been building on Pakistan’s coast near the Strait of Hormuz to elucidate a fresh perspective.

The Caijing story does not sugar coat the current situation related to developing the port of Gwadar. The challenges are readily admitted in the subtitle, which states that a project with the “hidden potential to transform the Eurasian continent’s energy and trade landscape” [改变欧亚大陆能源和贸易格局的潜力] will require China to “cut through the brambles.” [斩棘] All kinds of difficulties are discussed in the piece, from the problem of electricity and fresh water shortages to the issue of illiteracy that is said to reach as high as 75 percent of the local population. Pessimists, the article notes, are doubtful that Beijing can show a return for all of its investments in the port and the whole concept of the China-Pakistan economic corridor is described as “facing a test.”

Pakistan’s internal fissures are said to hold the project “by the elbows.” [掣肘] “The overall deterioration of the security situation strikes a blow against investor confidence.” Indeed, it is observed that China is building its port in the most unstable part of Pakistan, the restive province of Baluchistan [俾路克斯坦省]. To boot, the port is located very near to Iran—not exactly a darling of global investors—and is dependent on Iranian energy supplies. The article relates how the shock of a May 2004 terrorist attack against Chinese workers that killed three has not been forgotten, so that an outburst of further violence in Baluchistan in April 2015 has again rattled Chinese confidence. According to the Caijing article, Pakistan has committed to deploying 15,000 soldiers to protecting the China-Pakistan economic corridor. But the author of this assessment also laments that having armed guards everywhere also may not make investors feel completely comfortable either.

Still, the report is not all gloomy and there seems to even be some decent progress. Since the management of the port changed hands from a Singaporean owner to Chinese management, the article claims that all new equipment and machinery has been installed, including cranes, forklifts and trucks for hauling the containers. Up to now, most of Gwadar’s trade is with Pakistan’s most populous city of Karachi, which is 600 km away along a coastal highway. The planned handling capacity of the new port, at 3–400 million tons, apparently amounts to ten times that of Karachi, however, and is said to be equivalent to all of India’s ports combined. A new desalination plant is reported to be up and running to provide for the port’s basic fresh water requirements. That plant is also said to distribute some of that precious resource to nearby residents free of charge [向附近居民免费分发淡水]. Much more fresh water is needed, but another benefit to locals, according to this Chinese rendering, will be the opportunity for Pakistanis to develop training and experience in modern port operations. Perhaps most impressive in this report, however, is the interesting detail that a convoy of sixty-plus trucks rumbled down the 3,115 km road journey from Kashgar in the Chinese province of Xinjiang [中国新疆的喀什] to Gwadar in fifteen days during November 2016. With export products destined for Africa and the Middle East, this convoy apparently signifies that the China-Pakistan Economic Corridor “has been realized” [变为现实]. For China, there are the benefits that Pakistan has valuable resources in its own right, such as a major cotton export industry, or the opportunity to gain tax and tariff advantages. But the most tantalizing dream for Beijing is that coveted energy resources will be shipped almost directly via Gwadar through pipelines from the Persian Gulf into western China. [ . . . 从波斯湾地区进口的原油和天然气直接从瓜达尔登陆或直接通过管道运往 . . . 中国西部].

Even as China and India once more come nose to nose and eyeball to eyeball across the forbidding glaciers of the high Himalayas, the United States must resist the temptation to pour gasoline on this potentially dangerous conflagration even though more than a few U.S. (and global) arms merchants would benefit from the intensification of Sino-Indian military rivalry. Nor do more bombs and special forces for Afghanistan portend any particular progress. Indeed, the inclination in Washington to blame all of Afghanistan’s troubles on Pakistan is extremely unlikely to resolve any fundamental strategic issues and may well make the overall strategic situation highly combustible. On the other hand, China’s “Belt and Road” holds out the promise of genuine developmental progress for both Afghanistan and especially Pakistan, as discussed above. The Chinese Ambassador to Islamabad from 2002–07, Zhang Chunxiang, is quoted in the Caijing article as follows: “From 2002 to the current day . . . China has pursued commercial goals in Gwadar and there is not a single [Chinese] document to demonstrate the intention to convert Gwadar into a military port.” But whether or not Ambassador Zhang is believed or not, there is actually nothing especially alarming about the PLA Navy having a foothold near Hormuz anyways. Even the most truculent China hawks must concede that Beijing has legitimate security interests in this region.

A more mature and forward-looking approach is badly needed. That is not one that seeks to plunder Afghanistan’s mineral wealth to pay for a failed war—a farcical line of argumentation that recalls the fantasy of using Iraqi oil to compensate the United States for trillions squandered in Middle East quicksand. Rather, a responsible policy for Central and South Asia that respects the reality of limited U.S. resources (and patience) would finally withdraw all forces from Afghanistan and initiate a major effort to bring about confidence-building measures to improve the climate of relations between Beijing and New Delhi. These could involve prior notification agreements concerning major military exercises or deployments of naval task groups into sensitive areas, as well as restraint in selling arms.

Most critically, the new approach would accept and even embrace the long-time, but now blossoming, China-Pakistan partnership as revealed in the discussion above of Gwadar’s difficult, but steady development. Such an acceptance would be built on the stark logic that Washington and New Delhi have much to lose if Pakistan slips into violent chaos or radicalism. They each have significant gripes with Islamabad (and Beijing), to be sure. But seen in a larger context, they both also have much to gain from a more stable and prosperous Pakistan.