America Should Present China With a “Finlandized” Korea Option 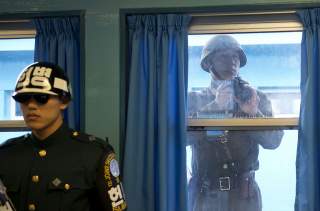 Michael Swaine recently made an important argument about restarting progress on the Korean Peninsula. Like many observers he sees that the Korean situation is coming to a head. Former President Barack Obama told incoming President Donald Trump that North Korea would be his greatest foreign-policy challenge, and the Trump administration is talking tough. If North Korea really does acquire a nuclear-tipped intercontinental ballistic missile capable of striking the U.S. homeland, U.S. air strikes would be more likely than not, despite the huge costs. There is desperation to find some off-ramp before the Kim family pulls us all over the edge.

Swaine revives an idea that has been on the margin of the debate for awhile (one I have made before too): offering China a neutralized or “Finlandized” Korea as the best way to tempt China to finally cut off North Korea. The resulting North Korea implosion would eventuate unification. Perhaps that would not happen immediately, but Pyongyang likely cannot survive without the Chinese umbilical cord. U.S. Forces in Korea (USFK) would then exit a unified Republic of Korea, their mission accomplished. Korea would then de-align from the United States to reassure China, perhaps retaining a large military with some of former North Korea’s nuclear weapons to defend itself against all comers, much like Switzerland’s centuries old armed neutrality.

Every time I have heard this idea floated; however, it has come from a Western analyst. In my experience, South Koreans, especially conservatives, almost monolithically reject it for several reasons:

• It artificially limits a unified ROK’s choices of alliances. All states are entitled to choose with whom they align. This deal effectively removes that right from the ROK in order to placate China. That is open bullying, which any nationalistic people would find hard to swallow.

• It instrumentalizes North Korea. This deal tacitly admits that China wields a veto over Korean unification because of its ability to indefinitely prop up North Korea. This is the bitter truth, of course, but not one Korean, especially the anti-communist South Korean Right, wants to admit it. In that milieu, Korean unification is a Korean national affair, and North Korea is a wayward portion of the country hijacked by megalomaniacs who must one day return to the fold. North Korea, with all its terrible suffering and despair, is not a geopolitical card to be played by China or anyone else.

• The U.S. alliance vouchsafes small, encircled Korea. Korea is a middle power encircled by three great powers. Autonomy in such a neighborhood is tough to maintain, and so the U.S. alliance is very valuable. An allied, far-away superpower with no local territorial designs is a deeply attractive security choice, superior perhaps to nuclearized, unified nonalignment.

But What if the Alternative is Enduring Division?

These concerns reflect an ideal outcome of the division: North Korea collapses (somehow), regardless of Chinese patronage. Southern-led unification successfully occurs with minimal Chinese intervention. A unified ROK then has a free hand to determine its post-unification alliance and even nuclear choices.

The model would be German unity. In 1989/90, the Soviet Union was collapsing. So was East Germany. West Germany was rising, as was the United States. This Western-balanced correlation of forces helped West German Chancellor Helmut Kohl and President George Bush push for a deal with Moscow that allowed West Germany to absorb East Germany, complete with NATO membership, for a price. In effect, Bonn bought East Germany from the Soviets.

Unfortunately, a similar balance of power does not exist in northeast Asia. China is growing, not contracting like the USSR. So its ability to support its North Korea client is rising, not declining as was Moscow’s ability to subsidize East Germany. America’s lead over China today is not nearly as wide as it was over the Soviets then, and South Korea is not nearly as large or wealthy as West Germany at the time. In short, China can maintain the status quo indefinitely. So long as North Korea does not do anything outrageously suicidal, which seems unlikely, it will lurch on for awhile. To be sure, it will never take off economically or become a tiger economy. But that is likely good enough for its elite, who just want to hang on and do not care if their population remains trapped in permanent penury.

The ideal outcome is a conditionless, Southern-led unification, while the worst is the continuation of the status quo for another generation. Importantly though, the moral imperative in the Korean question is not Seoul’s geopolitical comfort—as much as we would like to retain its freedom of action—it is the disappearance of North Korea, the world’s worst human-rights abuser. North Korea is a slave state in the genuine sense of that word, and extinguishing it as soon as possible should be our main goal. South Korea discomfort with the specifics of unification should not blind us to the overwhelming moral imperative of ending the world’s worst orwellian tyranny as soon as possible.

If China is prepared to indefinitely prop up the status quo, then Swaine’s option may be our best chance of getting rid of a North Korea, which China might otherwise sustain for decades to come. This unified Korea would indeed lose USFK, but then USFK’s necessity diminishes when North Korea is gone. More post-unification Korea would indeed be constrained from aligning with the United States or (less likely) Japan against China. But this constraint would likely fade over time. The Eastern European states were initially not supposed to align with NATO in the 1990s. Mikhail Gorbachev’s administration has always insisted that the Americans promised them that NATO would not expand eastward as the Warsaw Pact collapsed. In time, that promise (whether made or not; James Baker disputes it) was lost, and the Eastern European countries regained full sovereignty in their alliances choices. They eventually joined NATO and the European Union. It is possible that China might slowly release a unified ROK from this commitment as it proves itself to be a reliable, peaceable neighbor that is not openly hostile to China.

None of this is ideal. We all want the ROK, a democracy, to end this as it sees fit, and not have the Korea narrative directed by the callous oligarchs of Beijing. But I fear that option is foreclosed. If it is, Swaine’s deal may be the only way to pull the plug on North Korea before it is with us for yet more decades.

Image: North Korean soldier takes photos through the window at the demilitarized zone in South Korea. Wikimedia Commons/Department of Defense