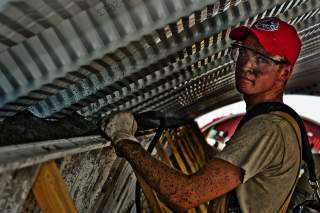 Maybe it is time to consider giving out participation trophies. It worked on millennials, why not the rest of the economy? Since 2000, participation in the labor force has been declining, and will continue to do so. In the current political environment, with the new administration stressing the creation of jobs and a return of manufacturing to the United States, this trend is likely to become a lightning rod. But it shouldn’t be.

Certainly, the methodology behind arriving at the headline unemployment number can be debated. There could be an argument for a figure around 10 percent—adding people who work part-time and want a full-time job together with those who have become discouraged and are “marginally attached.” That figure, published by the U.S. Bureau of Labor Statistics as the U-6 measure, currently sits at 9.4 percent. But there is no justification for number north of 20 percent.

What do comments relating to the unemployment rate have to do with a declining participation rate? Quite a bit. A decline in labor force participation places downward pressure on the unemployment rate. With a labor force in transition, a jobs-first president would need a reversal, or at least a stabilization, of the trend to continue to generate jobs at the current pace.

But reversing the trend with any sustainability would require changing the demographics of the United States. The Atlanta Federal Reserve looks at people choose not to participate. Since the fourth quarter of 2007, the participation rate has fallen by 3.2 percent, with most of the decline tied to structural and noncyclical demographic factors. Very little is associated with being discouraged and choosing to leave. This “shadow labor force” is only responsible for 0.4 percent of the decline.

To give an idea of where the fall in participation has come from since the Great Recession began, the Atlanta Federal Reserve looked at the range of underlying drivers. Aging of the population is the primary contributor, and this should not be a surprise. Boomers are aging out of their working years and into retirement. When you retire, you fall out of the labor force, but not out of the over-sixteen noninstitutionalized population. This drives down labor force participation by reducing the numerator, but not the denominator.

For context, since the fourth quarter of 2007, population aging is responsible for nearly two-thirds of the fall in participation—2.1 percent of the 3.2 percent. Other contributors to the lower rate are health issues and people delaying work to go to school. Those two combine for 1.5 percent. The evolution of the labor force, in many instances, demands more time spent in school. And the aging of the population is not a shock to observers.

So, aging is irreversible, schooling is a necessity and little can be done to reverse the downward participation trend. But it is not all dire. There have actually been factors that bolstered participation in the labor force since the Great Recession.

While an aging population is a drag, it could be worse. Following the Great Recession, participation among those with family responsibilities increased. This encompasses individuals who had previously stayed home to raise children or care for family members.

But the most intriguing trend is the postponement of retirement by some of the boomers. Whether it is a result of a shock to their savings from asset prices, or the loss of anticipated income, some boomers are putting off their retirement. This has the effect of holding back part of the flood of age-related participation declines. Cumulatively, this equates to increasing participation by nearly 1 percent.

One question is when people will be less likely to delay retirement. The additional pressure from more retirements could weigh on participation quickly.

In absolute terms, the labor force is not shrinking. But as a portion of the employable population, it is shrinking and will continue to do so. This has little, if anything, to do with a shortage of jobs and lots to do with the aging of America. According to the Job Openings and Labor Turnover Survey, there are more than five million job openings.

The reality is that the U.S. economy and its employment structure have shifted. The population is getting older, and more education delays entry into the labor force. Because the labor force is growing more slowly and its requirements are evolving, creating a jobs boom in America will prove difficult—even with participation trophies.