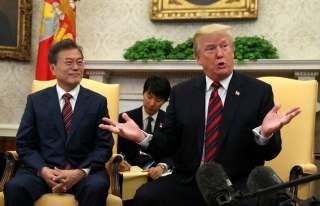 The Trump administration has indicated that it may use U.S. forces in South Korea as a bargaining chip in its negotiations with the North Korea over the latter’s nuclear program. Doing so might, at first blush, appear to be a sensible course of action. Washington will, after all, need to offer Pyongyang incentives for it to abandon its nuclear program. And, given the gravity of the threat posed by the North’s nuclear capabilities, particularly meaningful inducements such as a drawdown of American forces may be warranted. In an article appearing recently in The National Interest, Lyle Goldstein eloquently called on the United States to do just that, arguing that Washington must “put sufficiently weighty and shiny carrots onto the table”. Goldstein also highlighted the “many upsides of a moderate U.S. troop withdrawal from South Korea.”

If Korean geopolitics could be neatly disaggregated from the rest of East Asia, opening U.S. force levels to negotiation with the North might be advisable. The Korean Peninsula, however, cannot, of course, be disassociated from the regional environment— as the United States bitterly learned in October 1950. In this broader context, using U.S. troop levels in the South as a bargaining chip with the North would impair fundamental and overriding American strategic interests in the Asia-Pacific and would thus be a significant error.

The Trump administration has declared that “great power competition, not terrorism, is now the primary focus of U.S. national security.” It was right to do so. In its 2017 National Security Strategy (NSS), the administration also correctly characterized China, along with Russia, as "revisionist" powers, arguing that Beijing "seeks to displace the United States in the Indo-Pacific . . . and reorder the region in its favor." Because the American alliance system serves as the foundation of the U.S. position in East Asia and is the region's principal ordering feature, a primary Chinese objective is to weaken and eventually facilitate the collapse of U.S. regional alliances. If the United States is to prevail in its strategic competition with China, it will thus need to focus an extraordinary deal of time and energy on combating Chinese wedging efforts. Also, America will have to carefully usher its alliances through a range of other challenges. This means using troop levels as a bargaining chip with the North would have precisely the kind of negative consequences on alliance health that should be avoided.

Alliances are formed and must be managed under the condition of uncertainty inherent in the international system. Along with the fear of being entrapped in a conflict against a state’s wishes, “a pervasive aspect of alliances is the constant worry about being deserted by one’s ally.” Allies are thus highly sensitive to signs concerning one another’s intentions and the credibility of their commitments, scrutinizing not only their interactions with each other but all aspects of their foreign relations and domestic politics. And although these concerns are present in every alliance relationship, they tend to be particularly pronounced for junior allies that are disproportionately dependent on a patron for their security. If the fear of either abandonment or entrapment grows significant and mistrust festers, the alliance will be weakened and, if not remedied, can collapse.

Goldstein argues that Washington is unreasonably concerned with the perceived credibility of its commitments. He notes that efforts to assuage an ally’s fear of abandonment can lead to a dangerously single-minded focus on credibility that can end up entrapping a state in an unwanted conflict. He is, of course, correct, and the example of World War I is more than apt. However, because, as Glenn Snyder observed, “the risk of abandonment and entrapment vary inversely,” efforts to avoid entrapment can lead to equally undesirable outcomes. Such a state might reduce its commitment to its ally or withhold or scale back support for it, “devaluing the alliance for the ally and causing its defection.” For this dynamic, too, there are major historical examples such as the Sino-Soviet split and Sadat’s Egypt. If too much and too little emphasis on credibility can both be problematic, this hardly means that credibility is itself unimportant. Goldstein is right to note that “alliances sometimes cause instability,” but this should be a reason to pay particularly close attention to alliance management, not to dismiss concerns associated with it.

The principal challenge facing U.S. alliance management in East Asia today is not a surfeit of attention paid to American credibility but a deficit of it. American unwillingness to meaningfully counter Chinese coercion in the South and East China Seas; the Trump administration’s transactional approach to alliance relationships; and the decline in the size of the U.S. Navy at a time when Beijing’s anti-access/area denial capabilities have grown dramatically, have all served to aggravate allied fears of American abandonment. It was, for example, the anemic U.S. response to China’s conduct in the South China Sea that in part contributed to Philippine President Rodrigo Duterte’s decision to pivot away from Washington and toward Beijing.

While there is a need for the United States to assure its allies of its commitment to their security, using troop levels as a bargaining chip with the North would do the opposite. It would exacerbate U.S. allies' existing fears about American reliability and could well encourage them, much as Manila has done, to increasingly hedge against the possibility of abandonment by accommodating Chinese interests. For this reason, there can be little doubt that in their meetings over the past couple of months, Chinese President Xi Jinping has impressed on Kim the importance of negotiating down U.S. force levels in the South.

Why would using U.S. troop levels as a bargaining chip erode allied assurance? Negotiating the terms of a bilateral alliance trilaterally cannot but result in suboptimal allied arrangements. Thus, a willingness to allow a third party to negotiate among the most significant aspects of a bilateral alliance—i.e., the number of troops deployed in a partner’s country - demonstrates a more tenuous commitment to an ally’s defense.  While conducting such talks with any unaligned state would set a distressing precedent that would increase allied concerns about their partner’s commitments, a willingness to do so with a shared adversary would be particularly alarming. Indeed, one can think of few ways worse to inspire faith among a state’s allies than to negotiate the terms of an alliance with a common enemy.

A willingness to negotiate U.S. force levels in South Korea with the North would demonstrate to American allies across the region that the most sensitive aspects of their alliance with Washington can be negotiated with their adversaries to satisfy the immediate exigencies of the security environment. This would heighten precisely the kind of allied uncertainty and suspicion that the United States ought to be working to minimize. U.S. allies will wonder, if Washington is willing to offer such concessions to North Korea, what will it be willing to give up when it faces a similar or more difficult challenge from a far more capable China?

Negotiating U.S. force levels with Pyongyang would also weaken deterrence vis-à-vis Beijing. It would incentivize China, and other revisionist powers, to follow the North’s example of menacing the United States and its allies and then, at the negotiating table, offering to curb its hostility in exchange for an American military withdrawal. The NSS accurately states, “the willingness of rivals to abandon or forgo aggression depends on their perception of U.S. strength and the vitality of our alliances.” It is difficult to see how a willingness to use U.S. troop levels as a bargaining chip accords with this proposition. Doing so would result in a weakened U.S. military presence in the heart of Northeast Asia, make American alliances look flimsy, and would more generally telegraph a waning interest in sustaining forward deployments.

The Trump administration likely views the financial savings associated with a negotiated drawdown as a significant upside. Goldstein is apparently sympathetic to this view, writing, "With soaring national budget deficits, the expenses for major peace-time deployments abroad are simply no longer sustainable.” It strains the imagination, however, to see how the potential savings— a fraction of 1 percent of the President’s proposed defense budget for 2019— could be worth the political and strategic costs that would accompany such a reduction. Hal Brands has even suggested that, given South Korea’s substantial financial contributions, it is arguably “cheaper to station American forces there than stateside.”

In negotiations, the United States will have to offer the North carrots, but reduced U.S. troop levels in the South should not be one of them. The long-term strategic costs will far outweigh the (highly uncertain) benefits of doing so. Washington can and should, however, make clear that if the security situation on the Korean peninsula improves, the allies may well decide that fewer U.S. troops are required.  The critical point is that it would be an allied decision, not the product of negotiations with Pyongyang.

Using American force levels as a bargaining chip with the North would weaken the U.S. position in the region and give succor to Beijing’s aims. It would help to facilitate – not resist – Chinese revisionism. Washington should therefore not put the issue on the table.