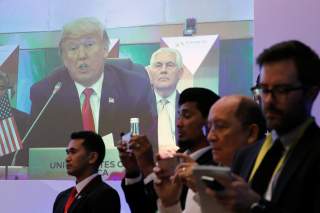 North Korea’s November 28 missile test, which involved an intercontinental ballistic missile that may be capable of reaching the United States, underscores the clear and present danger that Pyongyang poses to America. It also provides a resounding reminder about the dangerous implications for the United States of not having a clear, comprehensive and, above all, workable Asia strategy.

After President Donald Trump returned to the United States following a 12-day trip to Asia last month, he boasted of working with regional actors toward the goal of eliminating North Korea’s nuclear weapons. “We have to denuclearize North Korea,” he insisted.

Thirteen days later, Pyongyang launched the biggest and most powerful missile it had ever tested before, according to South Korean officials. The test bolstered the view of many nuclear experts that the notion of denuclearizing North Korea is fanciful. In effect, the White House is banking on a shaky plan with an objective that many experts believe to be wholly unachievable.

This blow to U.S. leadership does not, however, equate to a net win for Beijing—yet. Our conversations with diplomats and analysts in the region make quite clear that America’s Asian partners still prefer a strong U.S. presence in order to balance China’s growing influence. They remain willing to wait for Washington to show up and lead. Make no mistake: Washington’s treaty allies in Asia have zero interest in jeopardizing the American defense umbrella at such a tumultuous moment in the region, with the North Korea threat and deepening volatility in the South China Sea making for a giant powder keg in the world’s most populous region.

Asian countries also still seek U.S. leadership in the economic sphere—even as China deepens its economic footprint in the region.

For America’s Asian allies, China’s growing economic influence is dangerous because it’s wielded in coercive ways. Beijing has a penchant for punishing countries economically in retaliation for policies considered inimical to its interests. In 2016, after South Korea announced its plan to deploy the missile defense system known as THAAD, Beijing declared this a threat to its security. It claimed that Washington could use THAAD radars to track Chinese missile activities. In retaliation, Beijing banned Korean television and films in China. Chinese state media called for a nationwide boycott on the large South Korean conglomerate that owned the land on which THAAD would be deployed. By March 2017, nearly half its stores on the Chinese mainland had been shuttered. Seoul has assured Beijing it won’t make any more THAAD deployments beyond the initial system laid out in September.

To his credit, Trump, while in Asia, did unveil a vision for the region, described as “a free and open Indo-Pacific,” which is meant to increase cooperation between the United States, Japan, Australia and India.

It remains to be seen, however, how this new vision will be implemented and what distinguishes it from Obama’s “rebalance” policy to Asia, which sought to deepen Washington’s economic, diplomatic and security engagement with that same Indo-Pacific region.

If there is to be an effective U.S. Asia strategy, it will have to view the region from a wider lens—one that enables Washington to unshackle itself from the strategic straitjacket that has long compelled America to regard Asia from the rigid context of U.S.-China regional competition. Indeed, U.S. Asia policy has long framed its relations with key Asian states (such as India, South Korea and, increasingly, Vietnam) as a subset of U.S.-China relations.

Such a China-centric focus is misguided. U.S. relationships with Asian countries are of growing importance in their own right, irrespective of China. Asia boasts many of the world’s largest economies (China, but also Japan, India and South Korea), and it’s expected to account for 63.3 percent of global growth in 2017. India alone will account for 13.8 percent of such growth. Southeast Asian countries collectively are expected to see an average growth rate of 5.1 percent between 2017 and 2021. Asia, which boasts 60 percent of the world’s population, will continue to be an engine for global growth—and China is only one part of this remarkable growth story.

For now, in the absence of a U.S. Asia strategy, regional partners are looking within Asia to form informal alliances meant to counter China. The 11 remaining TPP signatories met on the sidelines of last month’s APEC Summit and issued a joint statement declaring their continued commitment to free and open trade. They’ve decided to cast their economic lot with themselves, and not with a China that they mistrust.

This dynamic is also playing out on the security front. The defense ministers of Australia, New Zealand, Britain, Malaysia and Singapore met on the sidelines of this year’s Shangri-La Dialogue, an annual regional security forum in Singapore, to discuss ways to improve military coordination, counter-terrorism, and maritime security. Australian Prime Minister Malcolm Turnbull kicked off the meeting by saying that “In this brave new world we cannot rely on great powers to safeguard our interests. We have to take responsibility for our own security and prosperity.”

All this said, Asia’s patience is not unlimited. Indeed, Washington’s window for crafting a credible strategy and convincing its Asian friends of its continued commitment to the region may be closing. In a response to questions at this year’s Shangri-La Dialogue about U.S. engagement, U.S. Defense Secretary James Mattis referenced a Winston Churchill quote: “You can always count on the Americans to do the right thing after they have tried everything else.” However, one Asian official later told a reporter that “the clock for American self-correction may be ticking much faster.”

Indeed, one of us (Sandy) recently asked a Southeast Asian diplomat whether a time would come when the region will get tired of waiting for America to come around and move closer to China—even if grudgingly.

China’s growing influence across Asia is an inescapable reality. If America wants to remain a Pacific power, it needs to accelerate the process of “trying everything else” and “doing the right thing.”

The absence of a clear blueprint for America’s role in Asia leaves a void that China is happy to fill. Rodrigo Duterte, the brash and bombastic president of the Philippines, offers a cautionary tale. Last year in Beijing, Duterte announced Manila’s “separation” from the United States and his intention to ally with China.

Naturally, the statement was more posturing than expression of actual intent. Still, the outspoken leader was giving voice to the opportunities that Asian countries believe they have to move closer to Beijing—opportunities that revolve more around economic than defense partnerships. The Philippines, like many developing nations in Asia close to Washington, has a strong need for infrastructure assistance, and Beijing has the deep pockets to provide such support. The longer Washington takes to assert leadership in Asia, the more enticing such arrangements involving China may become for key U.S. partners.

It’s high time Trump’s top Asia staffers get down to the critical task of drawing up a new and credible strategy for an Asia region that Washington cannot afford to neglect or let down. The future of U.S. leadership hangs in the balance—and, as Pyongyang’s latest missile test makes alarmingly clear, American security interests could soon as well.

Sandy Pho is senior associate with the Kissinger Institute for China and the United States at the Woodrow Wilson International Center for Scholars. Michael Kugelman is deputy director of the Asia Program and senior associate for South Asia at the Wilson Center.