America is Swimming in Oil, but 'Energy Dominance' Still Distant 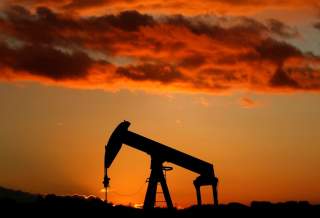 The energy war is over, and America has won, proclaimed President Donald Trump. But while the world’s newest energy superpower is now producing record amounts of crude oil, why are some saying this could be as good as it gets?

Thanks to the shale revolution, the United States has become a net producer of natural gas and is expected to surpass Saudi Arabia this year in oil production, potentially changing Middle Eastern geopolitics.

The American oil industry is literally swimming in crude, and there is little sign of it ending anytime soon.

However, the EIA does not see the oil-production party ending there. It projects U.S. crude output to reach an average of 10.8 million b/d next year, before surpassing an estimated eleven million b/d in November 2019.

The administration expects much of the growth in this year’s crude production to come from tight rock formations within the Permian region in Texas and from the Federal Gulf of Mexico. The Permian region spans fifty-three million acres across western Texas and southeastern New Mexico.

According to the EIA, operators can increase production in certain areas of the Permian region even if benchmark West Texas Intermediate (WTI) crude oil prices slip below $50 per barrel for an extended period. On January 31, WTI crude was trading at $64.15 a barrel, swelling profits of such low-cost producers.

Oil traders are growing increasingly confident over the outlook, with Bloomberg News reporting record bets on further price rises for both U.S. and global oil benchmarks.

“The long oil trade continues to be the place to be,” Tortoise Capital Advisors’ Rob Thummel told the financial news service.

BBL Commodities, one of the world’s largest oil-focused hedge funds, expects Brent crude to reach $80 this year, up from around $70 in January. Other analysts see WTI crude trading at between $60 and $75 a barrel in 2018.

However, not all analysts are convinced that America’s oil production spurt will continue.

Ian Taylor, head of top oil trader Vitol, has predicted that 2018 could see the last spike in U.S. oil output before growth flattens due to rising costs.

“I think the question, a little bit in the longer term is—is this the last big rise in U.S. production?” he questioned in an interview with Reuters.

Taylor expects U.S. output to rise by 0.5 to 0.6 million b/d in 2018, but the increase is expected to cause cost inflation and make some production unprofitable.

“If you look at the economics on most of the big Permian players, not many of them make a lot of money,” he said.

Taylor sees prices rising on the back of “robust” growth in global demand, but tipped the market would remain “boringly rangebound” in the short and medium term.

“The market is tightening up. But it’s very shallow . . . There will be moments when we must get closer to $60 and moments I‘m sure when we’ll flirt with a number with a four in front of it. But it’s a pretty narrow range,” he added.

Yet others predict oil’s era is far from over, in the United States and globally.

In 2017, world production was estimated at 97.3 million b/d, and this could reach more than one hundred million b/d by 2019 depending on the growth in U.S. production and whether OPEC members comply with a 2017 production agreement that curtailed supply.

“With the United States accounting for 80 percent of the increase in global oil supply to 2025 and maintaining near-term downward pressure on prices, the world’s consumers are not yet ready to say goodbye to the era of oil,” the IEA said in its “World Energy Outlook 2017.”

However, the Paris-based organization sees U.S. production starting to plateau by 2030, declining thereafter as OPEC output rises. Improving vehicle efficiency and the growth of electric vehicles is expected to crimp oil consumption growth, although aviation, road freight and shipping are still set to remain heavily dependent on oil.

Richard Kauzlarich, codirector of the George Mason University’s Center for Energy Science and Policy, says it does give Washington more leverage with Saudi Arabia and other Middle Eastern nations.

“We're not beholden to every political crisis that arises in that part of the world from the cost of our energy,” he told Platts.

However, others argue that the United States remains dependent on global supply, with domestic demand currently double domestic output. Shale operators may not be able to respond quickly to any global-supply shocks, making supply from Saudi Arabia and elsewhere still vital to the world’s biggest economy.

Jason Bordoff, director of Columbia University’s Center on Global Energy Policy, says U.S. shale producers could take up to nine months to a year to ramp up production in a crisis, compared to just a few weeks for Saudi Arabia.

“Domestic production is up, exports are up, reliance on Western Hemisphere imports is up, and the result, as The New York Times notes, is a suddenly enhanced bargaining posture for the United States,” Blackmon said.

“Regardless of who gets the credit, what it all amounts to is a pretty rosy current situation for the domestic oil and gas industry,” he said. “How long this will last is anyone’s guess, but it sure is a welcome change from the previous three years.”