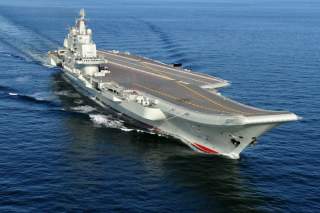 For decades, China has played catch-up with the world’s most advanced military powers. Starting from a very low technological base, and without the benefit of access to foreign technology markets, the defense base of the People’s Republic of China struggled to develop innovative technologies that could compete with Russian, European, and American systems.  China compensated for this deficiency by importing advanced foreign weapons and tech, and by orienting its military strategy around defense.

To some extent, China continues to play catch-up today.  However, new advances are bringing the Chinese defense-industrial base ever closer to its counterparts (indeed, in some ways Chinese technology has surpassed Russian).  This article examines five pieces of future Chinese military technology that could become “game changers.” These five systems each threaten to contribute to the transformation of China’s security environment, and by extension to revolutionize the politics of East Asia.

China’s intentions with respect to its carrier fleet have remained mysterious for decades.  The completion of the Liaoning made clear that China does intend to develop a carrier force, but questions remain about the size of the force, and about its eventual capabilities.  The lack of transparency with respect to China’s carrier plans means that we don’t yet have a sense of what new ships will look like, although they may carry the stealth-style fighters and could possibly launch AEW (airborne early warning) aircraft.

To be sure, Chinese naval aviation still has a very long way to go before the People’s Liberation Army Navy (PLAN) can challenge the U.S. Navy (USN).  The planes and the carriers, while impressive, will lack the capabilities of a U.S. super-carrier air wing. While the Chinese are working out deck operation procedures on Liaoning, future carriers will undoubtedly demand different kinds of expertise.

Nevertheless, a carrier fleet fundamentally changes China’s approach to maritime affairs. Even if the carriers enjoy limited capabilities by American standards (ski-jump aircraft can’t carry much ordnance for strike missions), China will still radically increase its power projection capability as soon as the next two carriers hit the water.

China appears to be building its first big cruisers. Although shipbuilders have yet to lay down the first ship of the class, a mockup suggests that China could be planning a cruiser of (by contemporary standards) very large proportions. If built, these ships won’t be as large as the Russian Kirovs or the USN’s Zumwalt destroyers, but they still represent a jump forward for China’s naval capabilities.

Analysts have estimated the Type 055 at around 12,000 tons, and have suggested that it could carry up to 128 vertical launch cells.  A cruiser of this size could threaten to strike into the deep interior with cruise missiles, or could control the airspace in order to protect a task force.  The PLAN may consider ship size a useful substitute for the wealth of bases that the United States Navy enjoys.  Larger ships, with greater ranges and more internal stores, can operate far from China’s relatively restricted ports.

Perhaps as importantly, construction of these cruisers would represent a major political commitment on the part of the Chinese government to the future of the Navy, a vision which undoubtedly includes power projection.  Along with the continued development of the PLAN’s carrier aviation, it speaks to the important that Beijing now allocates to the development of a blue water fleet.

The J-20 fighter first flew in January 2011.  Since that time, several additional prototypes have emerged.  Each prototype appears designed to help the work through different problems associated with a stealth aircraft. The J-20 is the more advanced of the two stealth projects China appears to be working on.  The J-31, a smaller aircraft, has trailed the J-20 in development, but could eventually serve on PLAN carriers.

We don’t yet know enough about the J-20s capabilities to appreciate what to expect from it.  However, it is certainly a large aircraft, presumably with a long range and a significant weapons load.  This presumably makes it capable of threatening US and allied military installations across the Asia-Pacific, especially when armed with air launched cruise missiles.  The J-20 could also conduct interception and long-range recon missions.

The J-20 promises to introduce a new element to the PLA’s system of anti-access systems (A2/AD).  These systems complement one another, and threaten to throw the military infrastructure of the United States and its Pacific allies out of balance.  The United States has become accustomed to using stealth aircraft, but it has yet to face a serious stealth threat.

Intercontinental ballistic missiles aren’t new, even for China.  But the DF-41 heralds a shift from minimal deterrence to secure second strike.  If China begins to build such missiles in large numbers, it can effectively equalize its nuclear relationship with Russia and the United States, as well as neutralize any effective national missile defense fielded by the U.S.

Rumors of the development of the DF-41 have existed for years, but China finally appears to have confirmed the existence of the ICBM in the last several months.  Unlike previous missiles, the DF-41 has what is referred to as MIRV capability, or simply stated, the ability to deliver multiple warheads to dispersed targets (possibly up to ten).  The DF-41 is road mobile, indicating that China has opted for mobility over hardened silos for the security of its deterrent.

Perhaps most interesting, if China decides to put conventional warheads on the missiles, and to equip them with sufficiently precise guidance to strike moving targets, then they could eliminate the zone of immunity enjoyed by U.S. carrier groups anywhere in the world.  Of course, the launch of an ICBM during the course of conventional war would sorely test the restraint of the United States, potentially leading to accidental nuclear escalation.

Perhaps the single most intriguing development to emerge from the Chinese military is its cyber-espionage force.  If the U.S. Department of Justice and a variety of other organizations are to be believed, the PLA is already conducting cyber-warfare at a high level of proficiency.  Unit 61398 is suspected of attacking a wide range of targets with a variety of innovative methods, with the goals of theft and disruption.

Intellectual property transactions, which make up an increasing percentage of global trade, have served as a ripe target for the PLA.  The Department of Justice contends that the PLA has stolen secrets from private U.S. firms and given them to state-owned Chinese companies.  In the civilian sector, this could provide a crucial competitive edge.  In the military sector, it gives China key insight into the development of U.S. systems.

Unit 61398 is already in operation, and indictments won’t prevent it from continuing its work.  Indeed, we can expect that China’s efforts in this regard will continue to increase, and that government support of the group will substantially improve its effectiveness over time.

The seventy-year history of the PLA has been, with fits and starts, a story about potential. With the exception of the PLA’s cyber-warfare unit, the capabilities discussed here remain “catch up” systems, weapons that will bring the Chinese military to near-equivalence with the United States and other advanced military powers.  This may be the last generation of Chinese systems that need to catch up, however, especially if the PRC manages to develop and protect an innovative core to its defense-industrial complex.